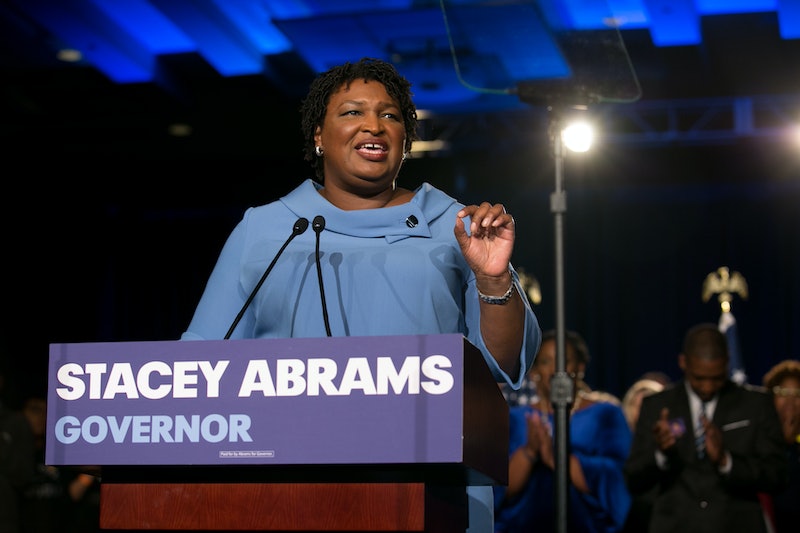 Running for elected office is hard work, especially when it's an election as hotly contested as Georgia's gubernatorial race between Stacey Abrams and Brian Kemp was. Which is why it's completely understandable that Abrams wants a nap before running for office again. Abrams ended her campaign on Friday, acknowledging she did not see a path to victory following reports Kemp held a 1.4 percentage point lead.

"I'm going to spend the next year as a private citizen, but I do indeed intend to run for office again," Abrams told Jake Tapper on Sunday in an interview for CNN's State of the Union. "I'm not sure for what, and I am not exactly certain when. I need to take a nap. But once I do, I'm planning to get back into the ring."

In ending her campaign earlier this week, Abrams refused to say she was conceding to Kemp, arguing that "concession means to acknowledge an action is right, true or proper," which she could not do. She then went on to accuse Kemp, who served as Georgia's secretary of state — a leadership position whose duties include administering and overseeing state elections — until two days after the election, of "deliberately and intentionally" using his post to suppress voting rights.

"To watch an elected official, who claims to represent the people in the state, baldly pin his hopes for election on the suppression of the people's democratic right to vote has been truly appalling," NBC News reported she said in a speech Friday. "Georgia citizens tried to exercise their constitutional rights and were still denied the ability to elect their leaders. Under the watch of the now former secretary of state, democracy failed Georgians of every political party, every race, every region. Again."

Had she been elected, Abrams would have been the first black woman to be elected governor in the United States.

Georgia's governor race put a national spotlight on voter rights as complaints of suppression and election rigging mounted. In October, Kemp's office reportedly put more than 50,000 voter registration applications — 70 percent of which came from minorities — "on hold," according to a report from the Associated Press.

In putting a hold on the applications, Kemp cited the state's "exact match" law, which requires all information supplied on a voter registration to exactly match the information filed with Georgia's Department of Driver Services or Social Security. Meaning if you register to vote as Jane E. Doe but are known as Jane Example Doe in the Department of Driver Services database, your voter registration application can be held.

In some cases, Kemp's office placed voter registration applications on hold after flagging the applicant as a "non-citizen." A federal judge ultimately ruled that Kemp had incorrectly flagged more than 3,000 potential voters as "non-citizens" and ordered they be allowed to vote.

Speaking with Tapper on Sunday, Abrams said she planned to continue to fight for voter rights, which she called "one of the founding blocks of our Democracy," in Georgia. "My mission is going to be to make certain no one else has to face this conversation," she said. "Going forward, we are going to ensure that there are fair fights in the state of Georgia and that voter protection is more than a slogan — that it is actually a common cause that cuts across partisanship. Because, as I said, there were Republicans who were harmed, Democrats who were harmed, Independents who were harmed and that is wrong."

"I want Georgia to be better," she continued.