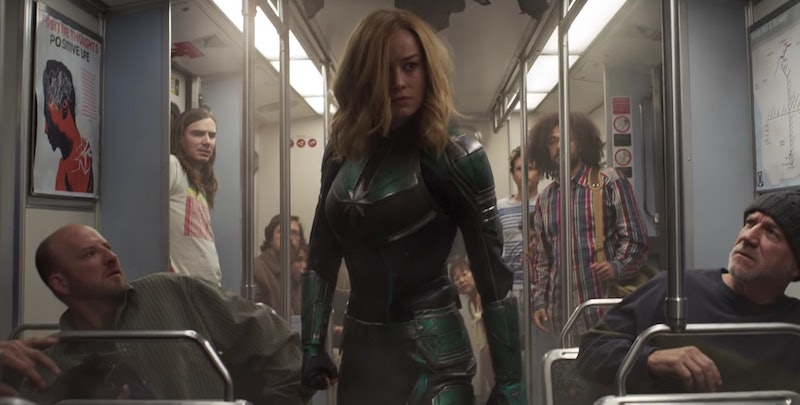 By now, you might have already had the pleasure of seeing Captain Marvel in theaters after it premiered on International Women's Day. If you have, then you know that Marvel Comics co-creator Stan Lee has his traditional Marvel Cinematic Universe cameo in the film. But lest fans worry that Stan Lee's appearance in Captain Marvel might be his last, rest assured Marvel Studios still has a few cameos still to come. In fact, Marvel Studios President Kevin Feige confirmed that Stan Lee will have a cameo in Avengers: Endgame, though after that, the future of Lee's cameos in the MCU are uncertain.

In an interview with Entertainment Tonight, Kevin Feige — overlord of the MCU and president of Marvel Studios — gave some insight into that very special Captain Marvel cameo, and how many cameos from Lee fans might get to see in the future. When asked about whether the comic book icon, who died in November of 2018, will be in Endgame, Feige confirmed that he will make his traditional cameo, saying simply, "Yeah." Then, when asked about a potential Lee cameo in the next film in the MCU lineup, Spider-Man: Far From Home, Feige said, "We'll see. We're heading — We shot a couple of others, so we're coming up on the last of them, yes." So, it sounds like perhaps he's not ready to commit to saying that Lee will definitely appear in Far From Home, but Feige did confirm that there are at least two Lee cameos already shot and ready to go, so Captain Marvel won't be the last.

Lee's appearance in Captain Marvel marks the first of his cameos in the MCU since his death on Nov. 12, 2018 (he did, however, appear in December's Spider-Man: Into The Spider-Verse). In the film, he was one of the passengers on the Los Angeles train Captain Marvel is on while fighting one of the Skrulls. It's the now-famous scene where she punches an old woman (who is really a Skrull in disguise). While searching for the shapeshifting Skrull, Captain Marvel walks by Stan Lee reading the script for Mallrats, and practicing his line in the 1995 movie — "Trust me, true believer" — which he appeared in briefly.

Feige also talked to ET about how they came to create the opening tribute to Lee in Captain Marvel. Fans who have seen the movie know that the Marvel Studios opening graphic, which used to include clips from past MCU films, was changed to show just footage of Lee's cameos. Feige explained:

"It was soon after he passed, and we were thinking about what to do and how to do it and whether to release something or put something out online. And we figured, as we always have, the way to pay honor to him is the way we've been trying to do while he was alive, which is the movies."

Feige went on, revealing the reason why he decided to put a tribute to Lee at the beginning of the film instead of the end. Following the Marvel Studios graphic, the words, "Thank you, Stan" appeared on a black screen before the film officially began. "I had always thought in the back of my head, should that day ever come," Feige added, "that I would want something sort of touching and rousing up front, as opposed to sort of depressing at the end."

Stan Lee will always be celebrated for what he gave Marvel fans now and in the future, and the MCU will do its part in continuing that tribute, even after they run out of filmed cameos.