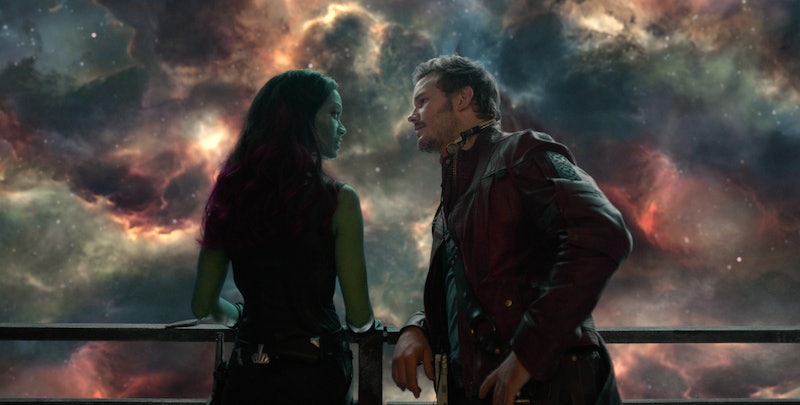 Since Guardians of the Galaxy was released in 2014, Star-Lord and Gamora have had a romance that's been slowly building, and frankly, driving fans a little mad. It's been four years, two movies, and the characters haven't even kissed yet. Or have they? At the Avengers: Infinity War press junket in Los Angeles, Chris Pratt, Zoe Saldana, and more Guardians cast members suggest that Star-Lord and Gamora have kissed, but the scene just didn't make the cut. Well, at least not in Guardians 2.

"We haven't kissed yet," Saldana says in the video below, and Pratt echoes that sentiment. But then Saldana accidentally slips up, seemingly hinting that a romantic moment between the two characters has actually been shot. "But can I share, though?" she says. "We have shot...". Pratt, though, quickly intervenes and intensely looks over to stop her, causing Saldana to finish her sentence with "Nothing."

She isn't the only one who has some intel about that potential kissing scene. Pom Klementieff, who plays Mantis (the character who hilariously revealed that Peter had "sexual love" for Gamora in Guardians 2), teases a romantic moment between the duo as well. "They don't kiss," Klementieff says, before adding, "No but actually, they used to and then..." She stops when co-star Dave Bautista (Drax) chimes in saying, "They did."

Unfortunately, the tight-lipped Infinity War directors Anthony and Joe Russo don't reveal anything more about that potential event. The two do suggest, however, that the romance could take on new dimensions moving forward. "Relationships are complex things," Anthony says. "You sort of have to play them out. And see what happens. And they can go one way or they can go the other." Adds Joe, "It's open to interpretation. We encourage people to embrace their 'ships and have fun with their own imaginations."

Since the first Guardians, Peter was always a bit more taken with Gamora than she was with him. But the two had sexual tension from the get go, even showcased in a snippet of the original Guardians trailer. And fans remember how the characters share a sexually-tense scene in the first film when Peter tries to get Gamora to dance (like Kevin Bacon in Footloose) with him. He puts his headphones on her as he touches her hand, they sway, and almost kiss among a backdrop of a starry galaxy — and then she abruptly pulls a knife on him.

In Guardians 2, the duo share a similar moment. They slow dance to Sam Cooke's "Bring It Home To Me" when Peter asks, "When are we gonna do something about this unspoken thing between us?" In the film, Peter also apologizes to Gamora for flirting with Ayesha even though she walks off and insists she doesn't care (although she clearly does).

In interviews with Furious Trailer last year, Saldana, Pratt, and director James Gunn helped explain Gamora and Star-Lord's complicated feelings. "Peter Quill is very clearly in love with Gamora," Gunn said. Added Saldana, "He likes her more than she likes him. But not because he's not the one for her. I just don't think she's thought that far." Pratt, meanwhile, theorized a different reason for why Gamora was reluctant to pursue a romance. "Gamora is completely cut off, based largely on her upbringing as cybernetically-enhanced super assassin," he said.

But something is clearly there between Gamora and Peter, so why wouldn't their kiss make the cut already? In a Facebook Q&A last year, Gunn shed a bit of light on the decision while acknowledging fans are wondering what the holdup is. "The truth is because that's not who Gamora is," he said, expanding on Pratt's earlier input. "She is not someone who is going to just give in to the moment of a lustful, passionate moment."

And, added Gunn, "Their love is based on something much deeper than sex. It's based on a profound friendship between the two of them." Hold on... friendship? Seems like it's a bit deeper and a tad more romantic than that. It's a good thing that Gamora begins owning her feelings at the end of the Guardians 2, because many viewers are hoping that it'll lead to more action moving forward between the franchise's two leads.

More like this
You Definitely Know The Voice Of Shuri's AI In 'Black Panther: Wakanda Forever'
By Brad Witter
This James Bond Event At Abbey Road Studios Was A 007 Fan's Dream
By Samantha Rollins
The 'Love Actually' Reunion Is Missing A Major Player
By Bustle UK
In 'The White Lotus,' Leo Woodall Gets His Moment
By Gabrielle Bondi
Get Even More From Bustle — Sign Up For The Newsletter