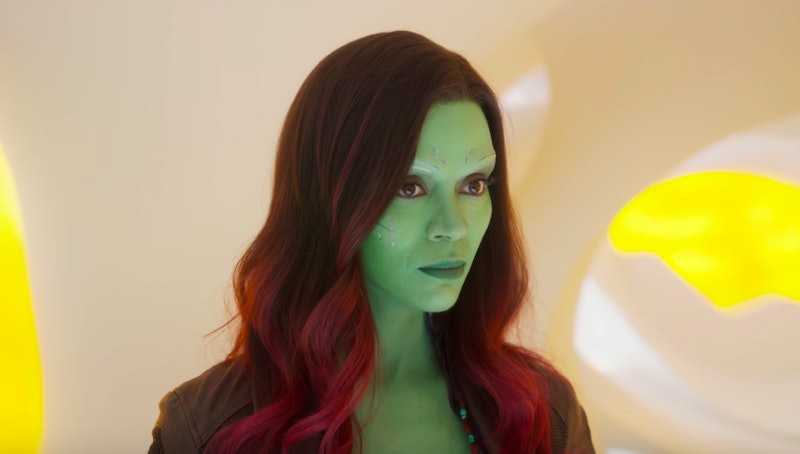 Guardians of the Galaxy Vol. 2 features four major female characters — a first for a movie in the Marvel Cinematic Universe. MCU films tend to feature all men, or just one or two female leads, with perhaps a few supporting women scattered about (see: Captain America: Civil War and Thor). GotG 2, however, attempts to buck that trend. Granted, none of the women in the film are leads — that title is reserved for the white, male Star-Lord — but they are prominent, especially the character of Gamora. However, one thing all of the female characters in GotG 2 have in common is that none of them are human. As aliens, the women in Guardians of the Galaxy Vol. 2 are painted bright colors, physically altered with CGI and makeup. In other words, they are changed so much visually that they aren't realistic or seen as human, a fact that takes away from their value as rare female superheroes on-screen.

All four women in Guardians of the Galaxy Vol. 2 are aliens, and as a result, none of them actually look like human women. There's Gamora, a green alien; Nebula, a blue alien with some cybernetic parts; Mantis, a natural (if slightly yellow) colored alien who has antennae sprouting out of her forehead and giant eyes; and Ayesha, a gold goddess indistinguishable from her subjects. Each woman has her own characteristics, her own drives, motives, and goals. They have agency and aren't reduced to love interests. Nearly all of them are seen through a male perspective — Gamora and Ayesha through Star-Lord, Mantis through Drax — but it's their appearances, not that, that keeps them from being relatable to audiences.

The women in GotG 2 are visually distanced from audiences in a way that Star-Lord is not, as he still looks like Chris Pratt, the human actor who plays him. Granted, the other male characters in the franchise, Drax, Rocket, Groot, and Yondu, are also either painted or completely CGI, but at the end of the day, they are not the main hero — Star-Lord is. The physical changes made to the female actors, like painting their skin different colors, contribute to an undeniable othering of the their characters. This puts women in the audience's ability to relate and identify with the women on screen at risk.

As we all know, representation on-screen is so important, especially for young women and people of color. Compared to most superhero movies, there is a relative abundance of women in GotG 2, and that's undeniably great. However, the fact that no woman seeing Guardians of the Galaxy Vol. 2 will see a character who looks like her (not to mention the weird "Mantis is ugly" recurring joke) is frustrating. Female audiences rarely get to see women in major leading roles, especially in superhero movies, and it's a shame that the women of GotG 2 aren't given the chance to be visually relatable.

Yet according to Zoe Saldana, who reprises the role of Gamora in the film and also played another colorful alien in Avatar, her Guardians appearance has its benefits, by allowing her to eclipse her own race and skin color on the big screen. "Rather than dealing with that heartache, I did rely spiritually and artistically on the freedom that these science fiction roles gave me with their different colors of skin," Saldana said in an interview with The New York Times. It's true that the fact that none of the women in GotG 2 look human allows any woman to connect with any character regardless of ethnicity, and that perhaps, as Saldana suggests, actors of color can have greater opportunities in science fiction roles that take skin color out of the equation. Yet while this may be a valid point, it's a bittersweet one.

It's disheartening that actors of color are so confined in Hollywood that they could have to play painted aliens just to get leading roles. And it's troubling that the only two female actors of color prominently featured in the MCU — Saldana and Pom Klementieff (Mantis) — are painted and physically changed, thus erasing their ethnicity on screen. To be fair, this doesn't seem purposeful — no one is accusing GotG 2 writer-director James Gunn of deliberately choosing to hide the ethnicity of his actors. But we as an audience must ask ourselves why the only two prominent women of color in the MCU are denied their ethnicity on screen, especially given the lack of female heroines across Marvel properties in the MCU overall. Is it that audiences are more comfortable with powerful women on screen if they don't seem realistic? Is it a way of appeasing audiences uncomfortable with seeing women, and women of color, in major roles on-screen?

It's good that Marvel is taking steps to rectify this problem in upcoming films, specifically with Spider-Man: Homecoming, Thor: Ragnarok, and Black Panther, all three of which will feature prominent black female characters in human form. Hopefully, as the MCU continues to expand and grow their catalogue of female characters, Guardians of the Galaxy Vol. 2 won't be a novelty, and we'll be able to see women — both alien and human — of all shapes, colors, and sizes on the big screen.