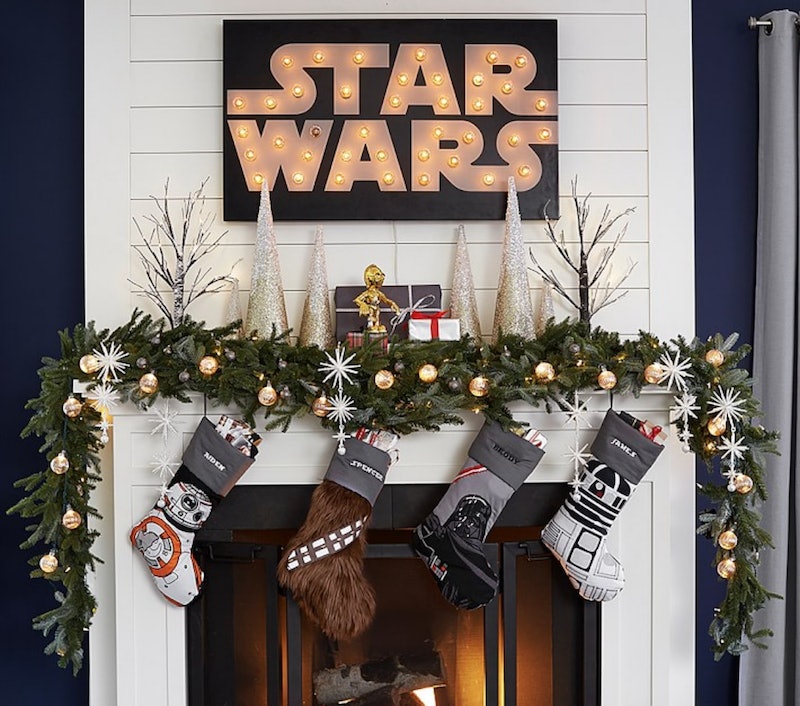 If blasting off to a galaxy far, far away sounds like a pretty great idea right about now, then you're going to love these straight-off-the-Millennium-Falcon Star Wars stockings from Pottery Barn. Seriously, these magical holiday stockings are just what you need to reconnect with your inner child. Since you've been adulting like a boss, perhaps you've forgone holiday decorations because you know your childhood holiday stocking will be hanging on the mantle at your parents' house. However, now more than ever, you could use some holiday cheer at home. And, you can get yourself a Star Wars R2-D2, Chewbacca, or BB-8 stocking online at Pottery Barn for $15.99.

In one of the most celebrated Star Wars scenes, Carrie Fisher, aka Princess Leia, says "hope" in the final moment of Rogue One. If you're feeling hopeless right now, hanging up a Star Wars holiday stocking can remind you that no matter how powerful the dark side may seem, there is always a reason to hope. It's a pretty powerful message as we round out the dumpster fire of 2018. If you want to get a stocking as a gift, you can spend a little extra cash to personalize the stocking and make it super extra for your intended. "Cute but not kitsch, our Star Wars [holiday] stockings celebrate their love of adventure — and yours, too," Pottery Barn noted on its website. Hey, while you're at it, personalize one for yourself too. Because, you deserve a piece of hope with your name on it.

Even if you're not a diehard Star Wars fan, you likely remember the first time you watched it on VHS or DVD with a bowl of popcorn in your lap. Maybe you even rented it from the now-extinct old-timey video store. I haven't seen all of the new movies, but growing up with three brothers who were obsessed with Star Wars, I watched the 1970s and '80s trilogy on the regular. I even wanted my very own wookie, because who doesn't want a giant, furry, talking companion that fights crime? I mean, Rory Gilmore even hooked up with a wookiee in the Gilmore Girls revival.

Memories of watching Star Wars are special moments I carry with me because it was a time of innocence and wonder that so many of us lose when we learn the hard truths of the real world. These memories are something I can be grateful for even if I can't find anything else to appreciate in my life. In fact, finding something to appreciate on the daily is a good idea because Harvard Medical School reported that being grateful can actually make you feel better.

And inspired by the "F**kin' Hooray" corner that My Favorite Murder hosts Karen Kilgariff and Georgia Hardstark do at the end of every show where they name something they're grateful for, I am committed to being more thankful for the little things. These Star Wars stockings that remind me of my childhood are a pretty good start. If none of the Pottery Barn stockings are your jam, and you want a Princess Leia stocking instead, there's one on Amazon that gives Carrie Fisher all the love she deserves — just one more small thing to add to your gratitude list.

Star Wars holds many truths that are timeless and universally relevant, which is why people continue to love it 41 years after the first movie was released. "[It's a] stepping stone of my childhood; great, classic storytelling that still works nowadays," @hockeyfied said in a tweet that was featured in a story on WIRED about why people still love Star Wars. "It features interesting and complex characters. Leia was a role model — a strong lady who doesn't take any BS and leads an army to freedom."

So, when you're feeling hopeless and depleted, remember that the world is blessed with boss-ass feminist characters like Princess Leia, and the real-life mental-health hero who played her, the late Carrie Fisher. Get yourself a Star Wars stocking and hang it above your bed. You can leave it up all year long because the Star Wars feel goods are not just for the holidays, amiright? May the force be with you my friendlies.