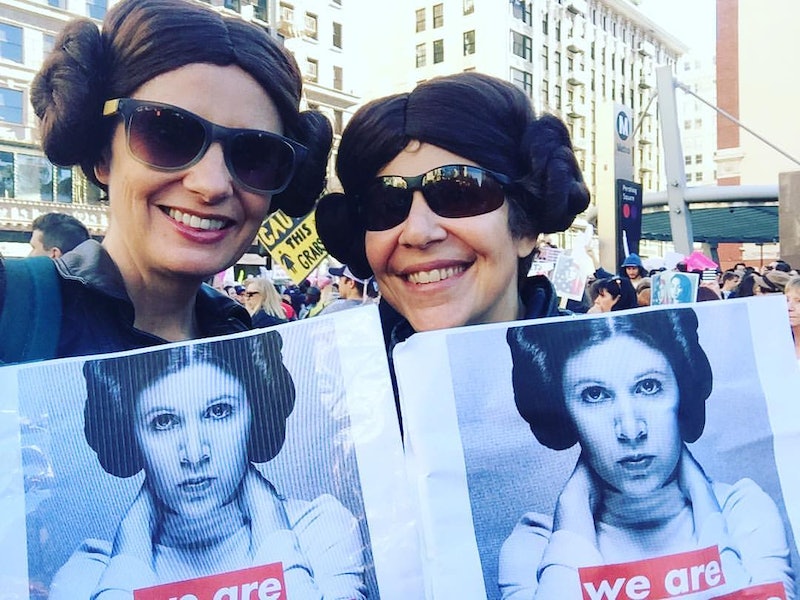 Like more than two million Americans, I hit the streets on Jan. 21 to protest President Donald Trump and to actively support the rights of so many people that face imminent threat under his administration. And, like thousands of others, I dressed as Star Wars feminist hero Princess Leia at the Women's March.

I have to admit that it didn't occur to me that so many people would also be donning space buns and carrying "We Are the Resistance" signs; for me, it was personal: Carrie Fisher's death hit me hard, and I wanted to honor the woman who I identify with for her fearless honesty about addiction and bipolar disorder, and her fierce vocal opposition to the oppression of women and people living with mental illnesses, which has helped me be more open about my own struggle with depression. But as I marched among so many others wearing the same cinnamon roll hairdo as I was, and carrying the same sign, it opened me up to a whole new level of connection with perfect strangers — making an already powerful moment both even more powerful, and more hopeful, too.

When my friend and fellow march buddy suggested we dress up as Leia Organa for the Los Angeles Women's March, I thought it was a beautiful way to honor Fisher, who undoubtedly would have been there in person if she were still with us. And it turns out I wasn't the only one who had that thought, either. On the jam-packed streets of downtown Los Angeles, I met hundreds of fellow protestors who shared with me how they felt about Fisher and her alter ego, or were dressed like her too.

The morning of the march, I felt a great deal of anxiety; I even had a small breakdown before I left my house. I'm not a crowd person, and I like knowing exactly what's going to happen. I knew I could only expect one thing, and that thing was the presence of lots and lots of people. Indeed, when my five friends and I got on the Metro at North Hollywood at around 8:15 a.m. to get to the march, we were instantly packed in like sardines. The train was so crowded that hardly anyone else was able to get on throughout the rest of the trip, even though the train made eight stops on its way downtown.

But we made it. And since it meant we could join 750,000 other people of every gender, race, orientation, religion, and more to march to City Hall and make our voices heard, it was totally worth it. What's more, here is when the magic happened: From the time we arrived at the Metro station to head to the march until we stepped off the train back in North Hollywood at 5 p.m. that evening, people stopped us every few feet to ask for a picture or to share with us how much Fisher and Leia meant to them.

The "We Are the Resistance" signs we carried were designed by LA-based artist Vanessa Witter — and the best part is, they weren't the only ones. Other images designed by other artists, including one emblazoned with the words, "A Woman's Place is in the Resistance" by Mississippi-based designer Hayley Gilmore and one featuring Leia as Rosie the Riveter (which is also a popular t-shirt supporting the Comics Alliance), were visible at marches all over the world. And with good reason: As Hayley Gilmore said about her own Leia sign, they're both "a tribute to the life and legacy of Carrie Fisher" — who didn't mince words when it came to her opinion of Trump — and "a source of inspiration to those participating in the [Women's Marches] across the country." She's a reminder that we are allowed to be not just who we are, but everything we are.

And despite my anxiety, once I was among hundreds of thousands of others — many of whom, like me, paid tribute to Fisher and Star Wars with their signs — I calmed down. The streets during the march were so packed that for two hours, we literally just stood still, shoulder to shoulder, and talked with fellow protestors. I could see other Princess Leia and Carrie Fisher inspired signs in the distance, and while we couldn't get to each other, we waved our signs at each other in solidarity.

Due to the amount of people present, everyone had to throw out any plan they might have had about what they were going to do at the march. I did not hear any speakers. I did not meet up with other friends I had planned to see. But, I was in a sea of people all there for a common mission. And it seemed that, despite all the hopelessness so many of us have felt since Nov. 8, we could actually accomplish that mission: To protect our rights by whatever means possible.

The march may be over, but I know there is still a lot of work to do. From the sheer number of people that turned out around the world, it's clear that collectively, people have had enough of their rights being trampled. It's also clear that many people were protesting for the first time, which, while it's great to see everyone getting involved, those who have been in the thick of fighting for their rights for years are skeptical that not everyone is in it for the long haul.

So what would Leia do? She would keep fighting; she would keep resisting. So would Carrie Fisher. Whether it's seemingly "little" things, like calling your representatives or being an ally in a moment of need, or one of the "big" things, like running for office yourself, there is much to be done. And we will get it done.

As we crossed the overpass of the 101 bridge, a woman asked us if she could take our photo. "Of course," I said, as I had at least 100 other times in the past few hours.

"Thank you," she said after she snapped the picture with her phone. "I'm going to send this to Carrie's AA sponsor. Carrie would have loved this."

Behind my sunglasses, my eyes filled with tears.

On the train headed home, I stood at the front of the first subway car staring into the inky, dark tunnel as we barreled ahead, building momentum.

We are the resistance.