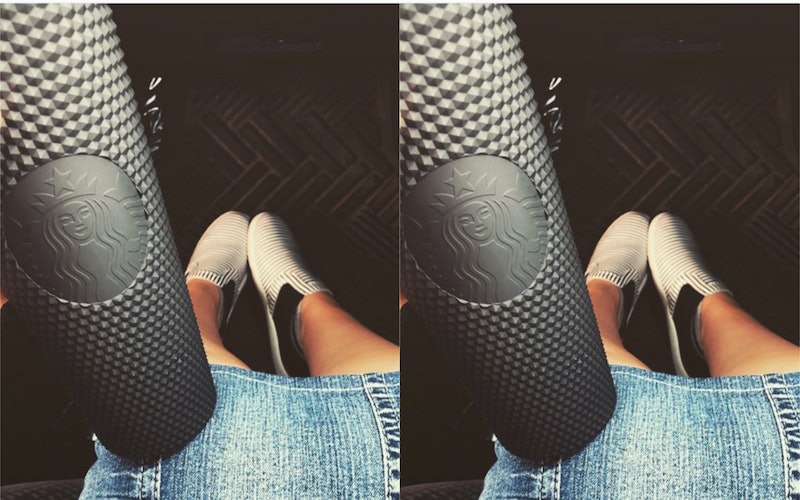 You know your glittery Starbucks tumbler? Your color-changing one? Your floral one? They're all shaking, because there's a new cup in town. Starbucks' black matte tumbler is here, and it's badass enough to kick all the sweetness out of your Pumpkin Spice Latte. Because here's the real cherry on top: It has spikes on it. Spikes! People are going to think you're so hardcore as you sip out of this puppy on your way to work.

I know we're all still barely out of summer mode. I was just starting to accept my tan lines and finally made peace with needing to shave my legs each day if I want to continue wearing rompers. Normally, I'm heavily against the early welcoming of seasons and holidays, because seriously, when the grocery stores put out the Valentine's Day candy right after Christmas, it makes me want to throw myself off a mountain.

But in the case of the Starbucks black matte tumbler, which started hitting Starbucks shelves in August and will sell with a retail price of $18.95 through the fall, methinks we can all make an exception. Here's an image of the black matte tumbler in question, in all of its spiky matte glory.

Unsurprisingly, the cup has been making the rounds on Instagram, producing enough hype that it's selling for up to $44.50 from second party retailers. Basically, if you see one of these in stores, snag it — both because it's sleek as heck, but because even if you don't love it, there's someone on the internet who will.

I can only imagine that Starbucks felt the need to produce something that would help balance out masses of us flocking to drink the liquid sugar that is a PSL this fall (that would be me, hi, hello), and so the universe gave us the black matte tumbler. But as we all know, Starbucks' cup game has always been strong — let us not forget that just a few months ago, they #blessed us with color-changing tumblers that would morph in hue depending on the temperature of your drink. Nothing had been that famous on the 'gram since the advent of the modern selfie.

This isn't the only Starbucks cup that is on offer this fall season, either. If you keep up with Starbucks stans on Instagram (or in the Leaf Rakers Society Facebook page), you'll see that customers are constantly unearthing new Starbucks merch finds, including a spooky black Halloween one with skull patterns, one with a full-on spiderweb design, and even some iridescent color versions of the black matte one. This fall is less a matter of which pumpkin thing you're going to drink, but what fall cup you're going to drink it in.

That said, there's a clear contender here — even if the black matte cup didn't reign supreme on its own, it has spikes, you guys. Spikes! Just wanted to point that out again. If you think you're going to need to Instagram this while wearing all black with black nails, you are correct. Happy sipping!