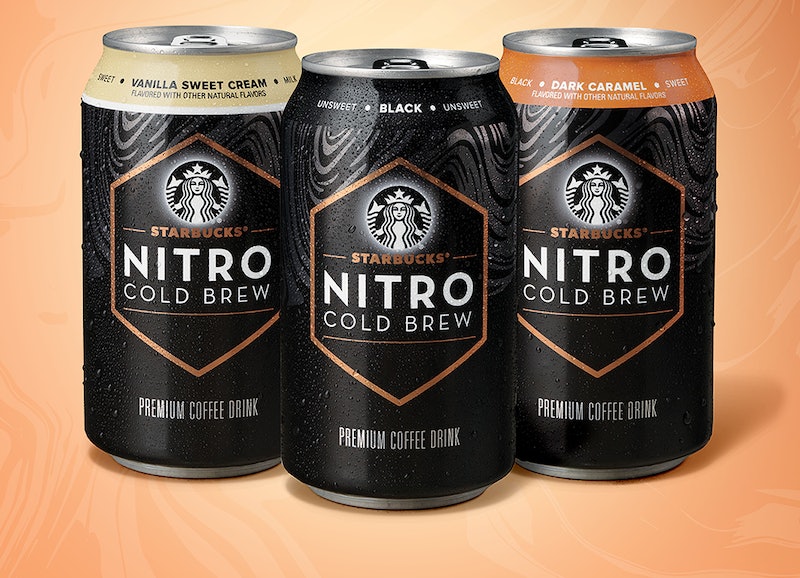 If you’re a “don’t talk to me until I’ve had my morning coffee, my second morning coffee, my early afternoon coffee…” kind of person, you’re going to love this news from Starbucks. Announced Wednesday, Feb. 26, Starbucks is launching ready-to-drink Nitro Cold Brew so you can get your nitrogenated coffee fix from the grocery aisle. No longer will you need to plan your schedule around your morning trip to the ‘bucks.

If you’re ready to define the relationship with Ready-To-Drink cold brews—or DTR with RTD—you can find the Nitro Cold brew at select convenience stores for $3.99 and in grocery retailers for $3.49.

In August 2019, Starbucks expanded its Nitro Cold Brew offering making it now available nearly-nationwide. Without getting too detailed about the science behind it, adding nitrogen to the cold brew gives the coffee a “creamy” quality, making it a smoother way to consume your caffeine. Of course, there are limits to greatness, and for that reason, you can’t get Starbucks Nitro in a Venti. This mostly has to do with how Starbucks wants people to enjoy the drink in-stores. Essentially, the drink loses the nitro bubble “cascade” at sizes larger than 12 or 16 ounces. However, you could try pouring a couple cans of the new RTD Nitro Cold Brew into a single glass just to see what happens.

In honor of the new RTD Starbucks Nitro Cold Brew, Starbucks is also giving away a limited number of velour Nitro track jackets adorned with the word “SMOOTH.” So, if you want to drink your Nitro Cold Brew and wear it too, you’ll need to go to NitroGiveaway.com ASAP to claim your jacket. Emphasis on the ASAP: the giveaway beings at 9 a.m. ET on Feb. 26 and ends when all 500 jackets are gone. If you’re one of the lucky 500, you’ll also get a couple cans of the new Nitro Cold Brew to try, saving you a trip to the grocery store. Although, sporting a Nitro Cold Brew velour jacket while buying Nitro Cold Brew is a level of bold I aspire to.

If you have yet to try the goodness that is Nitro Cold Brew, the new ready-to-drink cans will have you worshiping at its nitrogenated altar in no time.