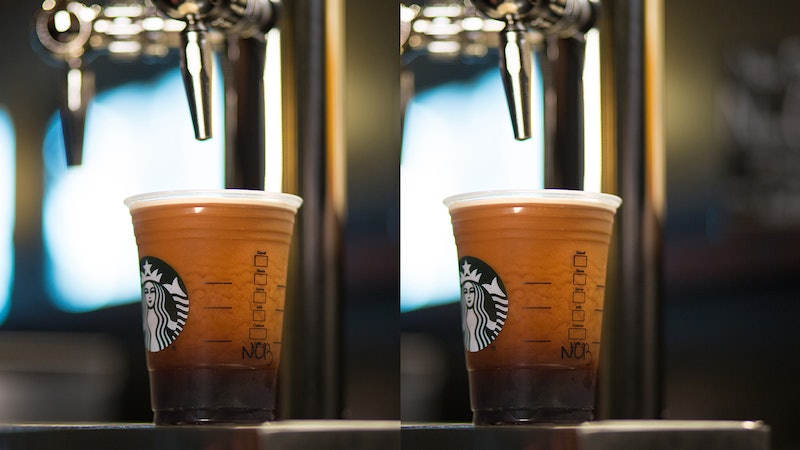 You can’t always get what you want, specifically if the thing you want is a Venti Nitro Cold Brew at Starbucks. Perhaps you, in your morning grogginess, have tried to order a 24-ounce cup of the chain’s Nitro Cold Brew. Or maybe you, god bless, have contemplated embarking on a caffeine journey and thought about attempting to order a Trenta Nitro Cold Brew, which would be a whopping 31-ounces of that buzzy bean juice. Unfortunately, you would come to find, neither of these options is possible at Starbucks: you cannot order a Nitro Cold Brew in any size larger than a tall (12 ounces) or a grande (16 ounces).

Is it because Starbucks loves to see us suffer? Is the Starbucks mermaid a sadist? Are we masochists for wanted to pump ourselves full of that much cold brew? Perhaps all three, but the reason Starbucks told PEOPLE is that ... the beverage just isn’t meant to be enjoyed in a cup that big.

Nitro Cold Brew is made, per a blog post from Starbucks, by infusing nitrogen into the company’s signature cold brew. When the Nitro Cold Brew is eventually served from a tap, the result is a drink that’s “smooth in texture, naturally sweet, and slow-steeped for 20 hours," a Starbucks rep told PEOPLE. Though you may be tempted to put a small swimming pool beneath the tap, the Starbucks rep told PEOPLE that ordering anything bigger than a grande defeats the purpose of the drink. The beverage would lose the “nitro cascade” or the frothy, creamy-like texture given from the “cascade of bubbles.”

Launched in the summer of 2016, Starbucks Nitro Cold Brew has quickly become a fan favorite. If you want a sneak peek into the science being the drink, Starbucks says the nitrogen is meant to bring out out the chocolatey undertones of the Cold Brew, making it taste naturally sweet. The bubbles from the nitrogen also add a foamy head to the drink. “Starbucks Cold Brew is known for its smooth texture and naturally sweet flavor, slow-steeped to be served cold without a trace of bitterness,” a Starbucks blog post states. “Add nitrogen and it gets even better, producing a cold, creamy iced coffee." In other words, you don’t need to add any cream or sweetener. Just the straight-up Nitro Cold Brew will suffice.

If you’re looking for those caffeine stats, the Nitro Cold Brew is comparable to other Starbucks drinks. A tall Nitro Cold Brew contains 245mg of caffeine. To be fair, that is less than the 260mg of caffeine in a tall Pike Place, Starbucks' standard brew. However, a small caffeine sacrifice may be worth it for that sweet, bubbly, Nitro foam. Also, something about just saying the words “cold brew” gives my body the caffeine jitters, even if it is psychosomatic.

If getting coffee from a tap isn’t fancy enough for you, there are several ways to level up your Starbucks Nitro Cold Brew. Starbucks baristas recommend trying a chai-infused Nitro topped with a sweetened cold foam. You could also flip the order, getting the sweet cream cold foam at the bottom of your cup and having Nitro Cold Brew poured on top. You could even start off simple and add a pump or two of vanilla or hazelnut to complement the cold brew's flavor.

Why not go buck wild and add some pumpkin spice to the mix? Or you could just fulling commit to the PSL lifestyle and opt for the Pumpkin Cream Cold Brew. Regardless, you can Nitro Cold Brew to your heart's content...so long as you do so in a 12- or 16-ounce cup.