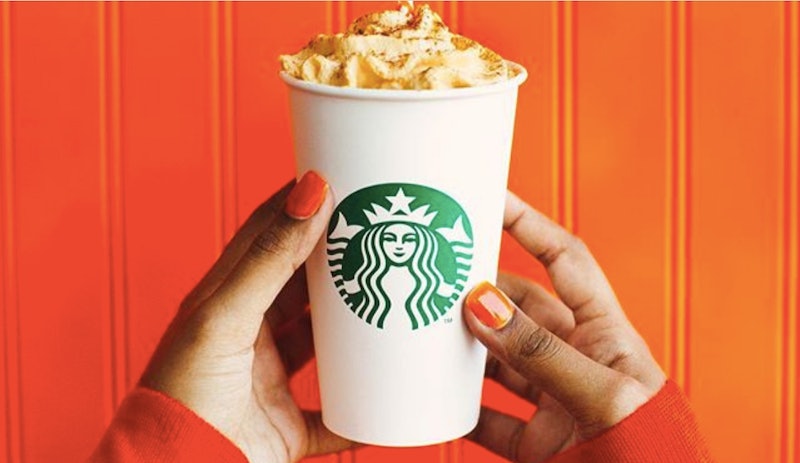 For anyone who's feeling like this year has really flown by, here is yet another thing that will make you go, "Omg, seriously? It was, like, just March." The Starbucks Pumpkin Spice Latte is back for 2018 (because, of course), and its release date is coming right up. The Pumpkin Spice Latte will debut on August 28, which is decidedly still summer... just not in the hearts and minds of anyone who is passionate enough about the PSL to drink one when it's still 90 degrees outside.

This year is a special one for the good ol' Pumpkin Spice Latte, as it marks its 15th birthday. The PSL was first released in 2003 after a group of Starbucks flavor developers got hard to work eating pumpkin pie and tasting espresso, and seeing what about the pie best complimented the coffee. (Sounds like a good gig.) That year, it was released in select stores, and the next fall it went nationwide. "Nobody knew back then what it would grow to be," Peter Dukes, who lead the team that created the drink, said in 2014. "It’s taken on a life of its own."

It really has become a big deal with fans eagerly anticipating the release date each year. And if this year's Pumpkin Spice Latte release seems early, that's because it actually is. As reported by Business Insider, for the past three years, the early release date has been September 1 or later, with the official release coming a few days after that. In 2014, the early release was August 26, which was the earliest ever, and the official release that year was September 2.

The PSL has gone through some changes in its 15 years. In 2015, real pumpkin was added to the recipe, and caramel color and artificial flavors were removed.

There have also been some changes at Starbucks, that mean Pumpkin Spice Latte drinkers can make their beverage more personalized. As always, Starbucks customers can choose what type of milk they'd like — nonfat, 2 percent, coconut, Almondmilk (which was added to the menu in 2016), soy, whole. And this year, there is a new topping customers can add. In May, Starbucks introduced Sweet Cold Brew Whipped Cream, which can be added to any beverage, and should still be available considering the Ultra Caramel Frappuccino and Triple Mocha Frappuccino, which both include the Cold Brew Whipped Cream are still on the menu. The Sweet Cold Brew topping is whipped cream infused with cold brew, dark caramel, and white chocolate mocha.

And considering that this thing is dropping in the middle of summer, some customers might want to buck tradition and get their PSLs iced.

Regardless of how you want your Pumpkin Spice Latte, if you do want one, there's not a long wait now. In only a week you'll be able to taste the flavors of fall. You just might have to wait on the part where you walk around with a cozy sweater in the crisp autumn air. For most of us in America, it's going to be sticky summer air for a while longer.