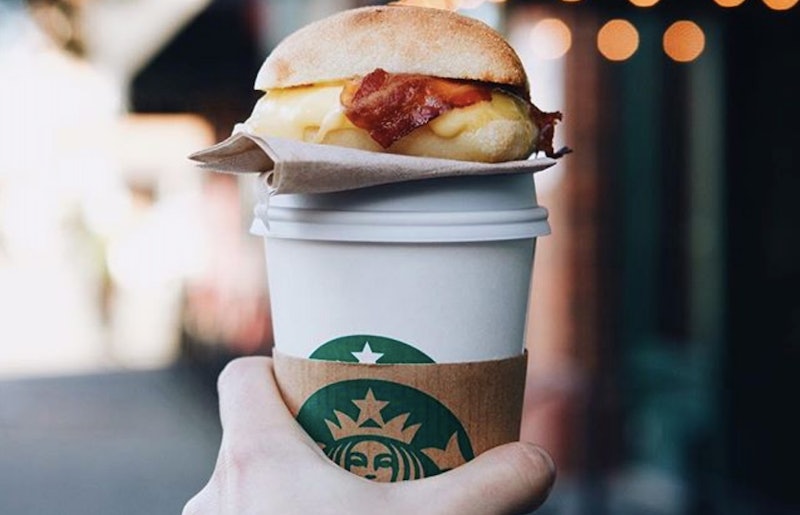 In great news for people who already go to Starbucks all the time, it will soon be easier to get free stuff while you're there. Starting on April 16, Starbucks Rewards will have a new tiered system that will let members cash in on perks more quickly. Basically, you can buy coffee so that you can get free coffee in a faster way than you used to.

With the new Starbucks Rewards, members will start earning points immediately after signing up and could potentially get rewards in a little as two or three visits. Members still earn points called "Stars" (obviously) and trade them in for a variety of items and bonuses. There will still be two Stars given for every $1 spent in Starbucks.

This is what the new tiered star system looks like:

The new setup will include current perks like free brewed hot coffee and tea refills, birthday treats, and Double Star Days. With the current program and new one, you can order via the Starbucks app and pay with your phone in-store. Starbucks also notes that with the Starbucks Rewards Visa Credit Card or Prepaid Card that Stars do not expire. As a regular member, the Stars expire six months after they're earned. You can see, this thing is really for Starbucks loyalists, but the new program should be a little more appealing to casual visitors.

The soon-to-be old system is pretty confusing, so Starbucks is really simplifying things. Currently, instead of members simply earning points and cashing them in as they will with the update, members have to earn 300 Stars before they can get any free items, besides the refills and birthday gift. When a member has between 0-299 Stars, they are considered on the Green Level. After collecting 300 Stars in 12 months, they are boosted up to the Gold Level, at which point they can get a free food or drink for every 125 Stars. The Gold Level also has Double Star Days each month, which helps things along. But, with only two Stars per $1 spent on the Green Level, getting there could take a very long time.

When the new tiered Rewards come into play, members can get drink additions starting at 25 Stars and full drinks at 50, without the 300-Star waiting period. For customers, it sounds like the update will be way better compared to how things are now. And for Starbucks, it will probably help them get even more Rewards members on board. Starbucks says that there are already 16 million members, but you have to imagine that, even still, a lot of people passed up joining when they heard they wouldn't get anything until collecting 300 stars (aka spending $150) in 12 months.

More information on Starbucks Rewards can be found here.