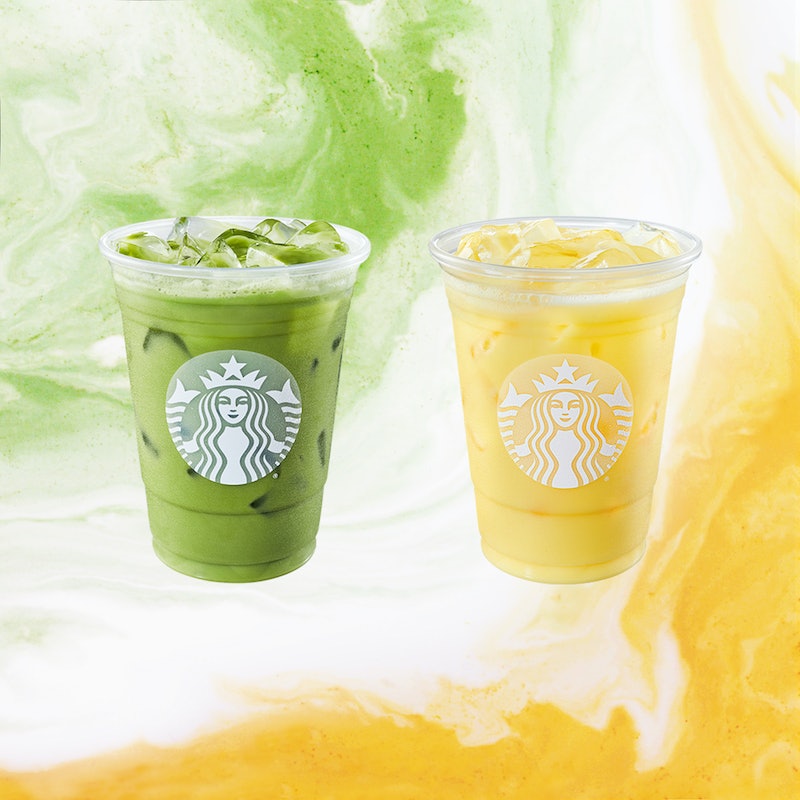 With Spring just around the corner, it only makes sense that your drinks match the season. And Starbucks' Spring 2020 drink menu is rising to the occasion with three new refreshing options that are just what you need to welcome back warmer weather. Even better, they're available at a shop near you now.

On March 3, Starbucks introduced two brand new non-dairy drinks: the Iced Pineapple Matcha Drink and the Iced Golden Ginger Drink. They're both iced, made with Coconutmilk, and created to have a pop of color. The Iced Pineapple Matcha Drink is created with the Coconutmilk base and Starbucks' premium matcha green tea. Then, the tea is shaken with pineapple and ginger flavors as well as ice. The Iced Golden Ginger Drink is a fruity concoction too, featuring Coconutmilk mixed with ginger, pineapple, and turmeric flavors. You'll get all the benefits and freshness of golden milk without having to use dairy. These drinks add on to Starbucks' growing non-dairy menu, including the Almondmilk Honey Flat White and Coconutmilk Latte that were released this past January.

In addition to the two fruity iced drinks, Starbucks also released a Nitro Cold Brew with Salted Honey Cold Foam. Not to mention, it comes topped with toasted honey. The original Starbucks Nitro Cold Brew was released in 2016 and became "one of our most popular drinks overnight" according to the company's website. It consists of Starbucks signature slow-steeped Cold Brew infused with nitrogen, which gives the drink its frothy, bubbly texture.

Along with the new menu items, Starbucks is celebrating the arrival of Spring with the return of its Happy Hour. On Thursday, March 5, between 2pm and 5pm, you and your friend can get two handcrafted grande or larger drinks for the price of one with Starbucks' Happy Hour BOGO free deal. All you have to do is make sure you've downloaded the Starbucks app before walking into a shop near you.