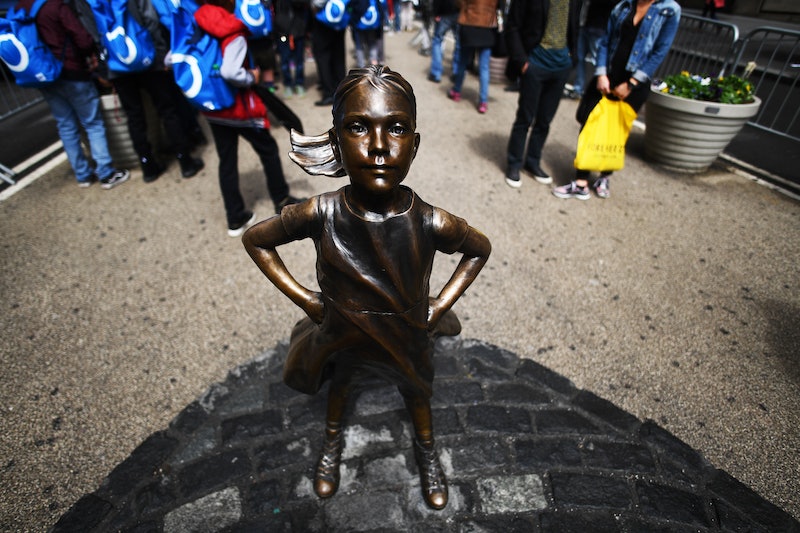 The "Fearless Girl" statue standing opposite the "Charging Bull" in New York City's financial district has recently become a symbol for feminists the nation over. She was put up for Women's History Month in March, cast in a defiant stance, exuding courage and a will to fight back. And that attitude won State Street, the company that commissioned the statue, many accolades. So news that the "Fearless Girl" firm has been accused of gender wage gaps for its own employees will come as a blow for many fighting against such discrimination. State Street denies the allegations, but has agreed to settle the case out of court to the tune of $5 million.

The case was brought against State Street by the U.S. Department of Labor. It claims that the firm discriminated against 305 top female employees by paying them less than male employees in the same or similar positions. Their case alleged that State Street's 15 black vice presidents were also underpaid compared to their white counterparts.

State Street has denied the claims, and released a statement Thursday that maintained the company “is committed to equal pay practices and evaluates on an ongoing basis our internal processes to be sure our compensation, hiring and promotions programs are nondiscriminatory.”

While "Fearless Girl" was popular with many, the statue also provoked controversy from various camps. One of the most vocal complaints came from Arturo Di Modica, the sculptor of "Charging Bull." At a press conference in April, Di Modica appeared emotionally aggrieved by "Fearless Girl," whose presence he claimed inalterably changed the meaning of his work. "Freedom in the world, peace, strength, power and love” — these were the symbolic legacy of "Charging Bull" before "Fearless Girl" came along, according to Di Modica. The original statue was meant to both represent and bolster the independent spirit of Wall Street after a 1980s crash that demoralized the financial district. "'Charging Bull’ no longer carries a positive, optimistic message,” said Di Modica's lawyer, Norman Siegel.

There were also accusations of "corporate feminism," a move by supposedly socially conscious companies to put more female leadership at the top of their payroll. It also encompasses the idea that if a woman just works hard enough and long enough, then anything is possible. The philosophy has come under fire for how it ignores the real distress of economically disadvantaged women, and how it tends to ignore structural barriers to equality — barriers such as, oh, say, a significant pay gap between what men and women make at the same company for the same work.

The investigation into State Street began in 2012. Documents filed by the U.S. Department of Labor's Office of Federal Contract Compliance Program state that since at least 2010, "State Street discriminated against females employed in their Senior Vice President ("SVP"), Managing Director ("MD"), and Vice President ("VP") positions by paying them less, in base salary, bonus pay and total compensation, than similarly-situated Males in the same positions."

The OFCCP went on to point out that their "analysis demonstrates that a statistically significant disparity in compensation remained even when legitimate factors affecting pay were taken into account." State Street denies these allegations, as well as similar claims made by the OFCCP that they had paid black VPs less than white VPs.

Twitter users had lots to say about this apparent dispaly of corporate hypocrisy.

"Fearless Girl" is scheduled to remain in her current spot until March 2018, despite an initial installment plan of just one month. The recent allegations against State Street will inevitably tarnish at least some of the meaning that many found in the statue.