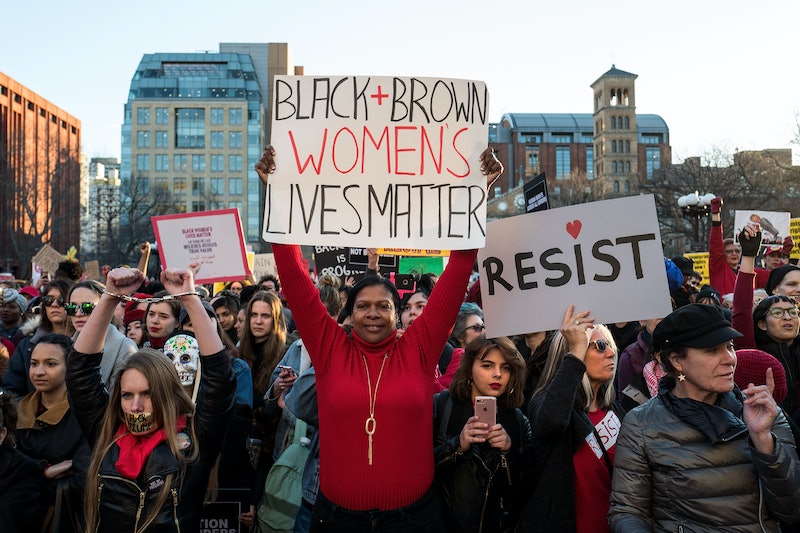 How do you address a problem that people don’t agree exists? Perhaps, first by looking at who appears to be in disagreement. Today, Pew Research Center released a new study about Americans' views on white privilege, looking at whether people think white Americans benefit from societal advantages that black Americans do not have. Essentially, is there societal privilege to being white and to what degree?

Overall, the results show a majority of Americans (56 percent) believe white people benefit “a great deal” or “a fair amount” from advantages in society that black people do not have. Just over four-in-ten Americans (43 percent) say white people benefit “not too much” or “not at all” from any societal privileges. While the overall population is relatively evenly split, there is an overwhelming, but admittedly unsurprising, divide along both partisan and racial lines.

An overwhelming majority of Democrats (78 percent) say white people benefit a great deal or a fair amount from advantages in society that black people do not have. Almost the same proportion of Republicans (72 percent) disagree, saying that white people benefit “not too much” or “not at all” from societal advantages. That split is even sharper when looking at how white and black people each responded to the question.

“Trump’s ratings are highest among those who see no societal advantages for whites,” the Pew report states. There is a statistical inverse relationship between people who approve of Trump’s job in office and those who say white people benefit from societal advantages that black people do not. Essentially, the less you acknowledge some degree of white privilege the more likely you are to strongly approve of Trump’s job as President.

There is overwhelming proof that institutional racism exists, from the prison system’s disproportionate incarceration of black people to black Americans’ increased likelihood of being a victim of a police shooting to the continued racial segregation of America’s schools to who owns the majority of wealth in America. The ways in which our culture still prioritizes the wellbeing of white Americans and ignores the problems it inflicts and perpetuates among black citizens are evidence of society’s continued racial bias against those who are not white.

White privilege is the ability to ignore the aforementioned problems or excuse their existence. It is the notion that race is a card you can play and not an integral part of who we are and the way we are viewed. Ignoring the issues that disproportionately affect black Americans, arguing that “All Lives Matter,” saying you don’t believe you are privileged just because you are white are all playing “the race card,” to borrow semantics. It’s saying that problems are worthy of discussion if the solution primarily benefits white people. It’s seeing white as the norm.

Acknowledging white privilege is not a means to erase or ignore the problems that affect white Americans. Yes, issues from poverty to police brutality are problems among all racial groups, white people included. However, solving a problem requires acknowledging who is hurting significantly. Addressing a problem in its entirety requires a solution that helps those who need it most.

More like this
5 Ways To Stand In Solidarity With Women In America From The UK
By Sophie McEvoy
How To Fight For Reproductive Rights, Based On How Much Time You Have
By Courtney Young
Why You're Seeing Green Bandanas At Abortion Rights Protests
By Lexi Inks
This TikTok Hard Seltzer Hack Involves A Milk Frother
By Alexis Morillo
Get Even More From Bustle — Sign Up For The Newsletter