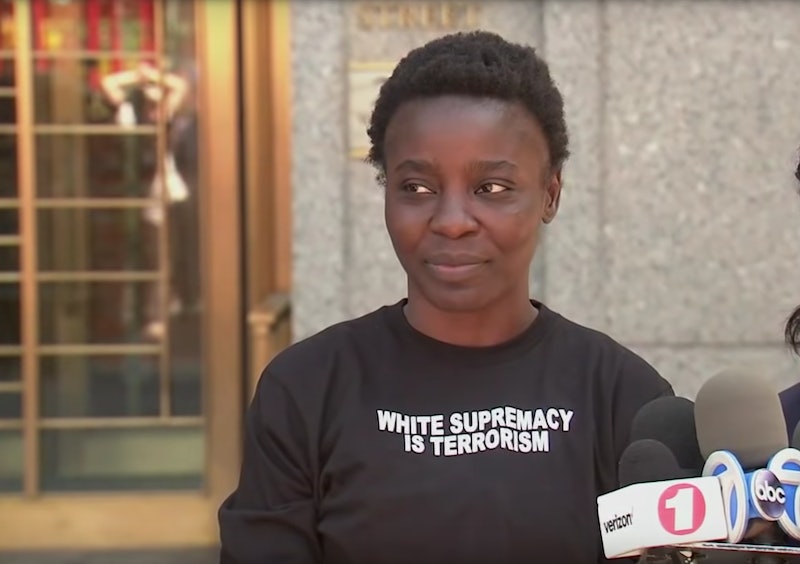 "When they go low, we go high," Michelle Obama famously proclaimed at the 2016 Democratic National Convention. Her speech has been invigorating anti-Trump activists ever since — including, most recently, Therese Patricia Okoumou. On Thursday, Okoumou said Michelle Obama inspired her Statue of Liberty protest, during which she took the former first lady's words quite literally.

"Michelle Obama — our beloved first lady that I care so much about — said, 'When they go low, we go high,' and I went as high as I could," Okoumou said on Thursday outside the Manhattan courthouse where she had been arraigned. She was arrested on the Fourth of July after climbing the base of the Statue of Liberty to protest migrant family separation at the border with the group Rise and Resist.

"Trump has wrecked this country apart," Okoumou continued in her speech outside the courthouse. "I can say a lot of things about this monster, but I will stop at this: His draconian zero-tolerance policy on immigration has to go."

The Trump administration came under fire recently for its policy of prosecuting all migrant parents who crossed the border without paperwork and separating them from their children. While deliberate family separation was a new tactic for the U.S. government, its practice of keeping children in cages at the border actually predates Trump. The infamous cages at the "Ursula" holding facility in McAllen, Texas, prompted an outcry in 2014 under President Obama.

Therese Patricia Okoumou was one of a group of Rise and Resist protesters who held a large "Abolish ICE!" banner beneath the Statue of Liberty on July 4. Okoumou left the demonstration by herself and climbed up the base of the statue, where she said she would stay until "all the children are released," according to CNN. She remained there for around three hours — pacing and sitting around Lady Liberty's feet and holding up a shirt inscribed with the words "Trump Care Makes Us Sick" — until she was finally apprehended.

In a statement, Rise and Resist said that it was uninvolved with Okoumou's individual protest, but that "Patricia is our friend, our comrade, our sister" and that it was working to find her legal representation. Organizer Jay W. Walker told CNN of the group's planned demonstration, "We thought we wanted to do something on our Independence Day, a day that obviously is meant for reflection on the ideals on which this nation was founded. ... Right now, we have a government that is actively turning its back on those ideals."

Trump ended the practice of taking children from their parents with an executive order last month, replacing it with a policy of indefinite family detention. Many of the families who were separated remain apart. The administration this week said that it does not know how many children are still separated, but that the number is "fewer than 3,000."

The 44-year-old Okoumou is a Congolese immigrant who came to the United States in 1994 and later became a naturalized citizen. According to New York Daily News, she lives in Staten Island and has been in the city for at least 10 years. Okoumou joined Rise and Resist several months back and has been participating in the group's protests about once a week since then.

"Only a stupid, unintelligent coward and insecure ... manic would rip a tender-age child from its mother," Okoumou said outside the courthouse on Thursday. "Reunite the children now."