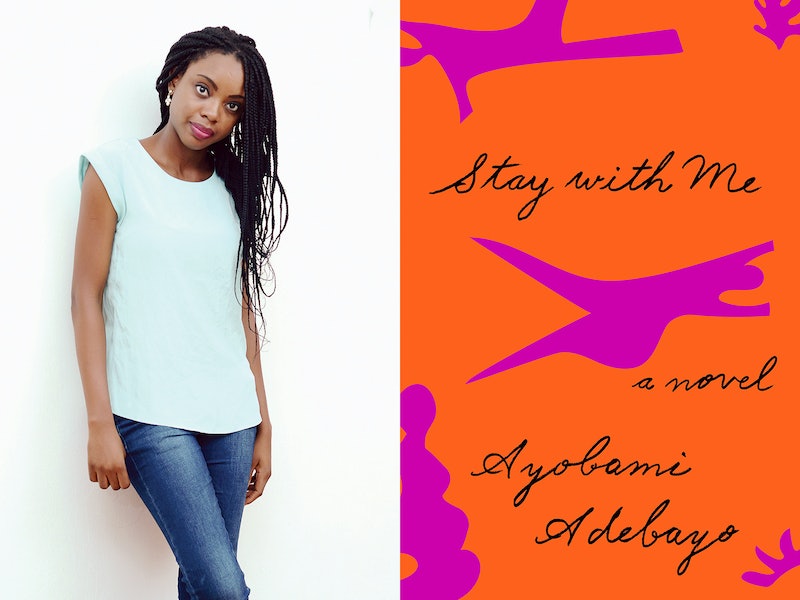 From the instant they met in college, Yejide and Akin, the protagonists of Ayobami Adebayo's debut novel Stay With Me, adored each other. That’s why they got married right out of school. But when Yejide fails to get pregnant after a couple of years, their extended family and Nigerian community insist something must be done. For reasons ranging from shame to jealousy to fear, Yejide and Akin each take steps that could lead to devastating results. It’s this collision of the most personal matters with cultural expectations and shockingly intimate meddling by others that creates the driving tension in Stay with Me.

Akin sums up their story in an early chapter: “There are things even love can’t do... If the burden is too much and stays too long, even love bends, cracks, comes close to breaking and sometimes does break. But even when it’s in a thousand pieces around your feet, that doesn’t mean it’s no longer love.”

“There’s a lot you could judge these characters for, but I really wanted them to be understood,” Adebayo tells Bustle. “I realized at some point that in order for that to happen, it was crucial for them to make their cases directly to the reader.” So she tells their story from alternating first-person perspectives, which makes each section a twist on the one before.

Stay with Me by Ayobami Adebayo

Adebayo first conjured Akin and Yejide in a short story she published years ago, but she revisited them for the novel because she found she couldn’t forget them. “I kept running into this couple everywhere,” she says. “One day, I would hear someone speak and I’d be certain that Akin would have said the same thing. The next day I would find myself standing in line at the bank behind a woman who carried herself just like Yejide. I sat down to write Stay With Me because two years [later], I was still obsessed with them.“

There’s a lot you could judge these characters for, but I really wanted them to be understood.

Though she may be a first-time novelist, Adebayo is no rookie writer, and she's already receiving a huge amount of acclaim for her work. In fact, Stay With Me has already been shortlisted for the 2017 Baileys Women's Prize for Fiction, no small feat for a first novel. In addition to editing the literary magazine Saraba, Adebayo has also been writing and studying fiction for years. She also happens to have been taught by two of the great female writers of our day — Margaret Atwood and Chimamanda Ngozi Adichie.

Adebayo says she credits Adichie for helping her develop a knack for editing and re-writing. Atwood guided her through polishing the first chapter of the novel — and blew Adebayo away with her encyclopedic knowledge of literature. “In workshop, she seemed to have read every book referred to by anyone in a very international class," she says. "That was absolutely awe-inspiring.”

Beautifully compact at 260 pages, Stay With Me is both economically and elegantly constructed. Adebayo explains that’s because she ruthlessly cut draft after draft until only the essential remained. “In retrospect, I think those sprawling initial drafts were crucial because they helped me figure out what the novel wasn’t about," she says.

As is my habit, I read this book with pencil in hand. By the time I finished, so much was underlined, it looked like someone had accidentally hit control-U on the entire text. Just two of the many lines I noted for their powerful simplicity:

“I was coming undone, like a hastily tied scarf coming loose, on the ground before the owner is aware of it.”

“The reasons why we do the things we do will not always be the ones that others will remember.”

If you’ve ever wanted children or know someone who has, you know the desire for a baby is a complex, elemental yearning. Adebayo nails why infertility feels like such a big deal — and what makes it a perfect scenario for storytelling.

“Many people don’t even discover that they’re infertile until they actually want children, such that at the point of discovery you have a situation where desire is confronted with powerlessness,” Adebayo says. “Also, most, if not all, of us want to be remembered when we’re gone. The desire to procreate is often rooted, to some extent, in our need to perpetuate the self.”

Many people don’t even discover that they’re infertile until they actually want children, such that at the point of discovery you have a situation where desire is confronted with powerlessness.

Yejide — who is regularly greeted by her in-laws and neighbors with “Are you pregnant now?” — often blames herself for what befalls her family. Grappling with guilt over things both within and outside our control is a universal experience, Adebayo believes:

“At some point, most of us will have to confront the fact that we’ve fallen short of expectations — ours and those of people whose opinions we care about,” says Adebayo. “Some of those expectations are unrealistic, even cruel. Still, knowing that doesn’t always protect us from feeling guilty for falling short. Even the saintliest amongst us of fail, fall, and hurt others.”

In the background of Stay With Me thrums the unrest of the 1980s and ‘90s military coups in Nigeria. Bands of roaming thieves threaten Akin and Yejide’s neighbors, a conflict that mirrors the invasions into the private sanctum of their marriage.

Even the saintliest amongst us of fail, fall, and hurt others.

Although the story dives deep into grief and can be heart-wrenching to read at times, light offsets the darkness, too. There are glimmers of humor and a flickering flame of hope. (I don’t know about you, but the way things are going in the world right now, I don’t have the constitution to withstand an unmitigated tragedy.)

With elements of a fable, plus a love story, a family drama, and a bit of a mystery, Stay With Me has something for almost everyone while also being unlike anything else.

Stay With Me by Ayobami Adebayo, $15, Amazon