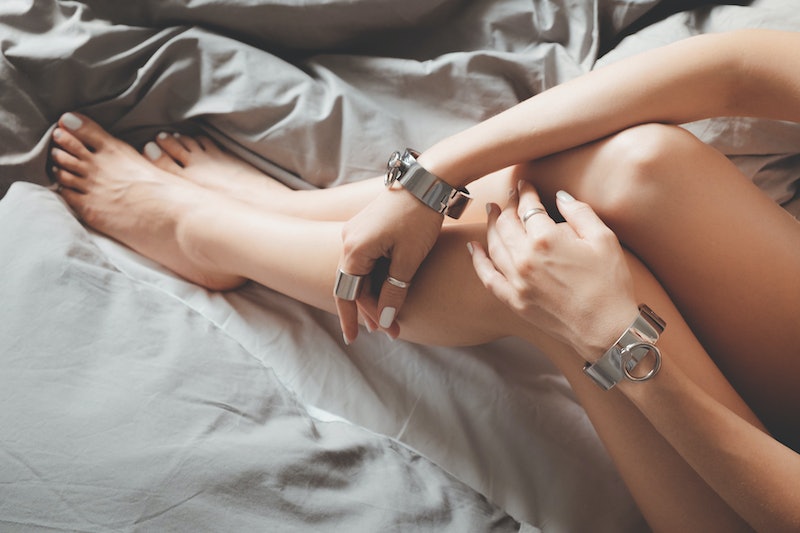 There's a worrying and specific way of violating women's sexual consent that you may not be aware of, but new research shows that it's a real problem. Alexandra Brodsky has published a study in the Columbia Journal of Gender and Law on the problem of non-consensual condom removal, a destructive behavior with some really upsetting motivations.

The study looks at cases where a man purposefully remove a condom during sex, against or without a woman's consent, which is just not OK. Even more worrying was that Brodsky found that in certain areas of the internet "stealthing" is discussed openly. Men who feel that they have a right to do it, to spread their seed, and even share tips on how to do it, which is both terrifying and disturbing. "I was shocked by the unapologetic promotion of so-called 'stealthing' I found on some dark corners of the internet," Brodsky tells Bustle. "The disrespect and misogyny aren't subtle."

And it's a confusing and traumatizing experience for victims. Not only does it leave them open to risks of STIs and pregnancy, understandably, it leaves them feeling violated. Brodsky interviewed women who expressed feeling intense shame, but also confusion — because they didn't know what to call what happened to them. One victim described it as feeling rape-adjacent, in an attempt to find a way to categorize it.

That's where the term "stealthing" comes in. Now, on the one hand the language is problematic — it's the word that perpetrators use. But "stealthing" makes it sound like a trend, like ghosting, and inadvertently can make light of a very serious sexual assault. But on the other hand, the lack of rhetoric is a huge part of the problem — and something that Brodsky is trying to address

"In that way, a name can validate survivors, help them stand up for themselves, and give us a tool to combat the practice."

"I spoke to a number of people whose partners had removed condoms without their permission," Brodsky says. "Two consistent threads in our conversations were interconnected struggles to know what to call the act and to feel confident in anger. Everyone knew it felt really bad, but without a vocabulary, it's harder to feel secure in our push-back on sexual practices that are often excused or ignored. Identifying a violent experience by name is a way to acknowledge it as a harm and connect it to other forms of wrongdoing. In that way, a name can validate survivors, help them stand up for themselves, and give us a tool to combat the practice."

We just don't have the language we need to discuss sexual assault and other non-consensual behaviors. It's why we have so many women who don't know what to call what's happened to them, who don't know 'if they were raped'. Who think if it didn't tick all of the boxes that match how rape is portrayed in film and TV then it doesn't count. So that's why the word stealthing cropped up. "What I found in my research is that while survivors often don't know what to call their experience, perpetrators do: they call it 'stealthing,' which trivializes and obscures the violence and impact. I don't want to accept their terminology or their conviction that contraceptive sabotage is inevitable. We deserve better." And we certainly do.

So is "stealthing" the ideal term? I don't think so, but it's trying to address a massive gap in our vocabulary — one that has dangerous consequences.

And The Legal Problem

Brodsky also argues that there's a blank space in our legal system, that there should be a legal tort for "stealthing", because in terms of viable responses to being assaulted in this way, we have a long way to go. Interestingly, earlier this year in Switzerland a man was actually convicted of rape for removing a condom during sex—  so some cultures are acknowledging the grave violation of this act.

It's a harrowing reminder that consent can be violated in a number of ways— and that we need just as many ways to try and redress those violations. For now, at least we're naming and examining a long-overlooked act and giving the women who have been through it a voice.

More like this
How Getting An Abortion Has Changed From The ’60s Through Today
By Amanda Chatel
35 Sexy Texts To Send Your Partner
By Griffin Wynne and Carolyn Steber
I Want More Sex But My Partner Has ED. What Do I Do?
By Sophia Benoit
Why You're Seeing Green Bandanas At Abortion Rights Protests
By Lexi Inks
Get Even More From Bustle — Sign Up For The Newsletter