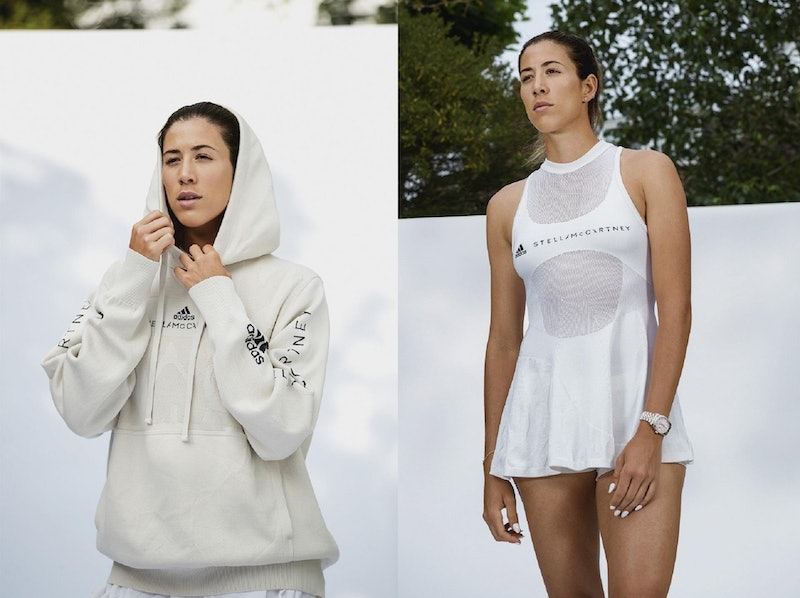 When it comes to our wardrobes, our insatiable thirst for something new has resulted in a real problem for the planet. It's all too easy to get rid of barely worn items, replacing them with brand new ones. But even when you think you've given your outfits a new home, it's still a likely possibility that they will end up on a landfill site, rotting away. That fate is precisely why Stella McCartney and adidas' new sustainable collection — which features some truly innovative materials — is a welcome move.

As the BBC reports, the fabrics that make up the large majority of clothing is extremely difficult to break down, meaning only one percent of designs are recycled into new clothes, rather than turned into landfill-headed products. A circular fashion economy that ensures every item of clothing can be reused in an eco-friendly way is clearly the way forward.

It's something adidas and Stella McCartney have been working on for some time. The pair have been collaborating since 2005, using the latest technology to create never-before-seen fabrics. Two designs from the upcoming Autumn/Winter 2019 collection have just been unveiled, proving that it is possible for the fashion industry to go fully sustainable.

The Infinite Hoodie and Biofabric Tennis Dress are the names of the freshly designed pieces. The first is made from a combination of NuCycl and organic cotton. NuCycl is a process, developed by textile company Evrnu, that takes old clothing and transforms it into raw materials that can be used for future designs. What's more, the resulting material can be reused again and again.

The tennis dress is a little different. Crafted from a protein-based fabric called Microsilk, its ingredients include the likes of sugar, yeast, and water. That fabric — which was created in partnership with material company Bolt Threads — has been combined with cellulose blended yarn, meaning the prototype dress is fully biodegradable.

Both of these kinds of designs have never been seen before in the fashion world. But they are just the start of an eco-friendly future, according to adidas' vice president of strategy creation, James Carnes. "The next challenge is to end the concept of waste entirely," he said in a statement. "Focusing on three core areas, we will explore ways to create products that can either be fully recyclable or biodegradable."

McCartney added: “Fashion is one of the most harmful industries to the environment. We can’t wait any longer to search for answers and alternatives. By creating a truly open approach to solving the problem of textile waste, we can help empower the industry at large to bring more sustainable practices into reality."

The full collection is expected to be released later this year. McCartney has also announced a new range inspired by her father's band, The Beatles. In a Guardian interview to promote the designs, she opened up about her sustainable efforts which include creating eco-friendly alternatives to leather, fur, and PVC.

When asked if it was fulfilling to be a hard-working inventor as well as a designer, her response was as candid as ever: “No. It’s not like I go, ‘Oh, I’m not going to use PVC because the challenge will make me more creative.’ It’s like, ‘Well, that f***ing sucks, and I’ve also only got three sequins that I can use in two colourways as opposed to 5,000 that everyone else will use.’

"If everyone else was sustainable, we could have a level playing field, so it does feel unfair — but it’s my choice and I believe very much in my reasons for working in that way."

The designer also admitted that changes in the fashion industry were being driven by customers, rather than companies. Motto: if you desire a more ethical wardrobe, demanding one could well and truly work.