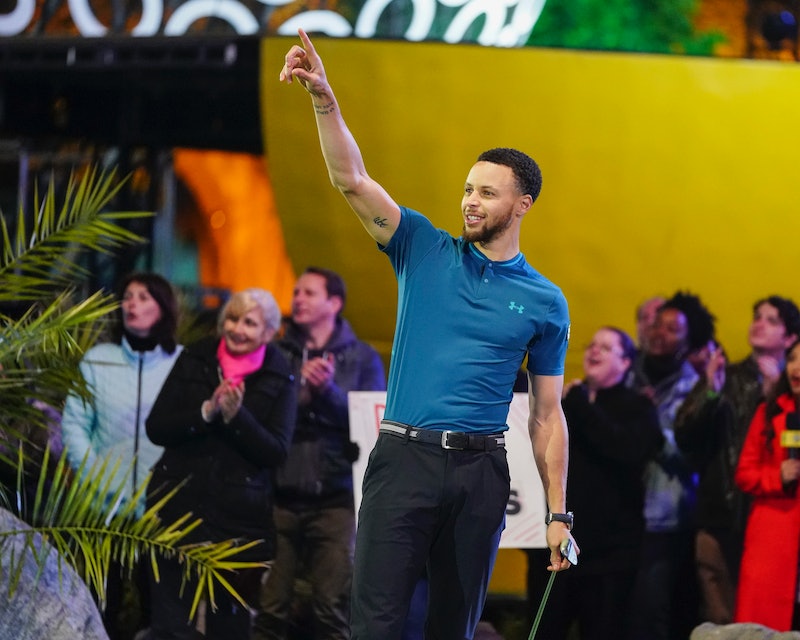 If you've ever played mini golf and wished the course was a little less static art piece and a lot more Indiana Jones, Steph Curry has you covered. Some may not know that the Warriors point-guard is also an avid golfer, and Curry's new project aims to bring competitive putt putt to the small screen for some light, hilarious summer fare. ABC's Holey Moley is like Wipeout with smaller balls, more holes, and the same slapstick body humor that comes from, well, the contestants getting the crud beaten out of them by the course.

Wipeout was ABC's flagship game show for a long while, running from 2008-2014, winning several Kids' Choice Awards, and inspiring a popular spin-off iOS game. It featured contestants doing absolutely ridiculous but taxing stunts, from dodging robotic arms to running across humongous, inflated red balls — almost no one could do it properly, and the ensuing flops in the water were always amusing.

After ABC quietly canceled the show, there wasn't really anything else that filled the same kind of comedic, athletic niche. ABC's Celebrity Family Feud and To Tell The Truth didn't involve sports, and NBC's American Ninja Warrior (unlike its zany Japanese inspiration, Sasuke) took itself way too seriously. Yes, straightforward game shows and sports are important ways to test our collective athleticism, intelligence, bring us together as a community, etcetera.

But I also just kind of want to see someone fall into a tub of mud.

So it almost feels like a breath of fresh air when, within the first few minutes of Holey Moley, the first contestant gets immediately knocked by the arms of a giant windmill into a row of fake, unnaturally sized tulips. Because of her sudden spill, they add on a penalty score and she's ultimately beaten out by a guy wearing a unicorn onesie. Holey Moley plays the footage of her falling in slo-mo while comedian Rob Riggle and ESPN sportscaster Joe Tessitore provide commentary about how, "Julia is an English teacher. I bet she had some choice words for that one." Yes, it's ridiculous. Yes, I love it.

Within the first episode you see a man dressed as a lumberjack (no explanation), another in a punk rock outfit, and yet another in a pair of very stylish banana pants. The costumes, along with Riggle's hilariously inane commentary (which often contains puns and innuendos and leaves Tessitore at a loss for words) and the amusing Stephen Curry cameos push Holey Moley more into Wipeout than American Ninja Warrior territory. (Though that isn't to say Holey Moley doesn't require an impressive amount of skill.) Holey Moley is filmed at the same Sable Ranch thatWipeout was, and both shows indirectly pay homage to all the zany Japanese game shows that came before them.

Japanese game shows ruled the airwaves in the '80s and '90s, and you can see how they crossed over and influenced Western mainstream with shows like MTV's Silent Library and ABC's I Survived a Japanese Game Show. You can see threads of older Japanese shows in Holey Moley's various courses, like how the Slip N Putt (where the contestants have to fumble their way up a slicked incline to reach their ball) likely draws inspiration from a show just called Slippery Stairs.

You can also say that the Log Roll course is based on a similar challenge in Wipeout, which then, in turn, can trace its roots back to the hilarious (and frankly dangerous) log and boulder dodging of Takeshi's Castle. The contestants flying across the water on a zipline to try and stick their landing (or else hit the water) also mirrors courses on both Wipeout and Sasuke.

Even the humorous chatter of Riggle and Tessitore, where they both praise the contestant's skill and laugh over their inevitable blunders, mirrors the way the Sasuke commentators would both cheer and chuckle at the competitors. It's all light-hearted of course, and the jokes always give way to outright astonishment when one of the contestants pull off a maneuver that no one was expecting.

All in all, Holey Moley fits right in line with ABC's "Summer Fun and Games" series, and will certainly amuse viewers both young and old alike. There's a lot of dark, distressing shows airing right now, so it's kind of nice to know there's also a show that indulges us and lets us chuckle when someone gets hip-checked by a giant windmill.