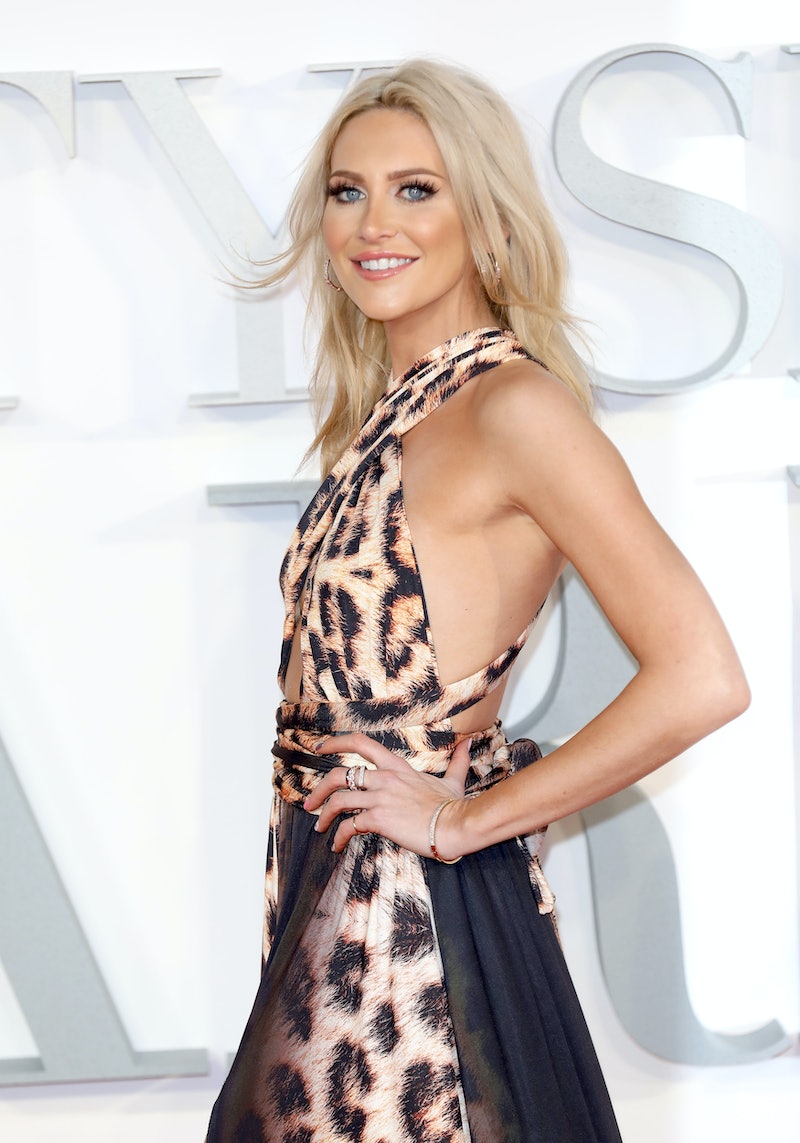 The Hills are alive with the sound of family drama. Spoiler alert: Stephanie Pratt said she's done with Spencer Pratt and Heidi Montag. Is this just a way to build up hype for The Hills: New Beginnings? Stephanie insisted that wasn't the case during the April 8 episode of Pratt Cast, the podcast she hosts with Bachelor in Paradise bartender Wells Adams.

Instead, Stephanie claimed, "Heidi is at home with [her son] Gunner, protecting her image. Spencer is out there looking as nice as he can look with his crystals and good energy." Wells observed, "I sense a little animosity toward your brother and Heidi." He's actually wrong, though. There is more than "a little" animosity there.

Stephanie declared, "Yes, we are not on good terms. We are not on speaking terms. I do not consider them my family." (Bustle reached out to Spencer and Heidi's rep for comment on Stephanie's claims, but did not receive an immediate response.)

So, what was the straw that broke the camel's back? Stephanie revealed, "We had our photoshoots for press and for the opening titles [for The Hills reboot]. We had three days of it. It went to 3 a.m. They were long shoots. Heidi had a bottle of champagne that she gave all the girls except for me." Is this the literal embodiment of the phrase "champagne problems"? Or is there more to it?

Before diving deep into the backstory, Stephanie continued to explain the most recent incident. She recalled, "Whitney [Port], sweet Whitney, keeps mouthing to me, 'This is weird,' because [Heidi] keeps asking everybody for refills."

Wells asked Stephanie, "Why didn't you confront Heidi?" She declared, "Because of my parents. That is the last time I'm putting my parents as the priority in front of this relationship."

Before The Hills reboot started shooting, the Pratts apparently discussed the possible effects on their family. Stephanie revealed on the podcast, "My mom, my brother and I all sat down and said, 'We will let this ruin our ruin our family again.'" But then, she declared, "I'm not protecting them anymore."

After that, Stephanie explained her plan to prevent the sibling rift from affecting their mother. She said, "What I'm doing for her is I'm not discussing anything that has to do with work with her." Does her mom listen to the podcast though? She discussed this in a very public forum, especially with the high anticipation for The Hills reboot. There's no way she's going to be able to keep this rift from their mother.

What's Stephanie's issue with her sister-in-law anyway? Well, she claimed, "What Heidi does is she plays my family for money. When my mom asked, 'What do you want from Costco? Toilet paper or paper towels?' She said a treadmill."

Heidi and Spencer (vaguely) addressed the family tension during the April 8 episode of their own podcast called Make Speidi Famous Again. Heidi shared, "I had a lot of Hills drama with a family member. That was very challenging and heartbreaking. I felt like there was some below the belt, nasty comments that weren't even true." She never mentioned Stephanie specifically, but her sister-in-law seems to be the only relative in the main cast, so she likely is referring to that same photoshoot drama.

Heidi continued, "On top of that, this person was trying to go up to my friends off-camera and it was just a lot to deal with." After explaining why she felt betrayed by her "friend" in the cast, Spencer heavily hinted who Heidi was referring to when he said, "Breaking news, we are definitely not having Whitney Port on the podcast next week. If you were looking forward to that, that will never be happening."

The couple didn't spill any specific spoilers, but Spencer did warn, "Heidi is not playing, it's game on."

But really, is this all for the sake of hyping up promotion for the show? During the aforementioned Pratt Cast episode, Wells asked Stephanie what a lot of people might be thinking: "Is this something that's a directive of MTV? Is this a great storyline for you guys?"

Stephanie got extremely emotional when she told him, "No, this is me actually exiting my family." Let's just hope any of this drama isn't actually permanent. Not only are they family, but they're also coworkers. They can't avoid each other forever, especially since they'll have to promote The Hills: New Beginnings soon. The reality TV drama is just not worth it. Hopefully the Pratts will be able to reconcile at some point in the future. Anything can happen, since the rest is still unwritten.

More like this
Taylor Armstrong Would “Definitely” Return To RHOBH After Her Season 3 Exit
By Brad Witter
Which RHODubai Housewife Has The Biggest Net Worth?
By Hugh McIntyre
Kim Kardashian Reveals The First Text She Sent To Pete Davidson
By Jake Viswanath
Pete Davidson Pops Up In This Hidden Scene From The Kardashians Season Finale
By Jake Viswanath
Get Even More From Bustle — Sign Up For The Newsletter