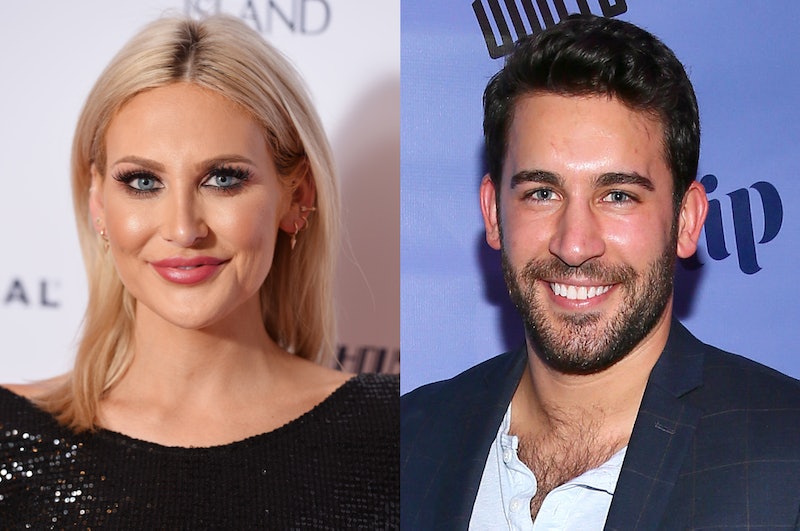 Wells Adams and Derek Peth met when they were both contestants on JoJo Fletcher's season of The Bachelorette. Neither of them got her final rose, but they did leave with a solid bromance. After the show, Wells found love with actor (and Bachelor super-fan) Sarah Hyland. And recently, Wells set Derek up with Stephanie Pratt from The Hills while he was visiting Los Angeles, as reported by E! News.

Yes, that does seem pretty random. No, there's not some sort of crossover event happening with Bachelor in Paradise and The Hills (unfortunately). Wells and Stephanie actually co-host a podcast about The Hills called Pratt Cast. Weirdly enough, Derek has never watched the show. He didn't know who Stephanie was, so it truly was a blind date.

Of course, there were some Instagram Stories from the date night, but those disappear in 24 hours. Thankfully, Derek appeared on the March 18 Pratt Cast episode to dish on their date night. Stephanie wasn't there for the discussion, but Derek revealed a lot to his good friend Wells.

Apparently the date did not get off to a great start. Instead, it got off to a (very) late start. Derek revealed,

"It took an hour and 15 minutes before Steph finally showed up—and her reasoning is she was in Hawaii and they don't have daylight savings time and she never changed her clock and she thought it was a different time."

Does she not have a cell phone? Shouldn't the clock automatically adjust? So many questions.

Wells said that Stephanie sent a text being confused about what time it was, and she also asked, "When did the time change?" So her clock did automatically adjust on her phone, but she just didn't believe it? Wells said that he responded with, "The time changed last week, Steph." He even pointed out, "I can understand your house clocks not changing, but your phone changes."

Derek also admitted, "Probably the third thing I said to her was you need to pick out food because the kitchen closes in 10 minutes." Although the date started out rough, Derek still gave her a chance and it actually ended up going well. He admitted, "I was pleasantly surprised — she's a lot smarter than I thought and very quick." (Quick, minus her speed traveling to the date.)

Even so, Derek shared, "There was not an empty dull moment." Their date even continued beyond that initial meal. Derek told Wells, "We went to two Irish bars. We met a couple and bar hopped with them for two hours. I am into it. I would definitely see her again." He even confessed to a make-out session and suggested another date. He remarked, "I think it would be cool to do New York."

Stephanie could not chime in on the conversation because she lost her phone and didn't show up to tape the March 18 podcast. However, Stephanie did post about it on Instagram. She wrote,

"I kinda made the date...However, I did not make it to the #Prattcast studio the next day to talk abt it. the boys roast me on last weeks episode!! It’s hilarious."

She also told her followers that she was ready to share her take on the date during the March 25 episode Pratt Cast. During the episode, Stephanie said, "He's a great guy, like a great guy." She also admitted that he's not her type, "but he's pretty. It's weird." She concluded, "I need to hang out with him again."

They really do need to hang out again and discuss it on a follow-up episode of Pratt Cast, or even an episode of The Hills: New Beginnings.