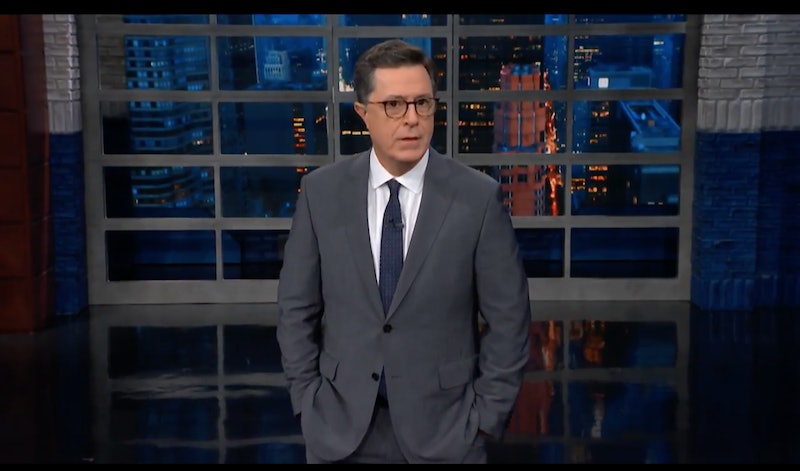 The Late Show with Stephen Colbert/CBS
By Sarah Friedmann
Oct. 23, 2018

On the newest episode of The Late Show, host Stephen Colbert condemned Trump's anti-transgender memo, characterizing the act as one of "random cruelty." The memo suggested that the Trump administration is considering defining gender as a biological concept, something which would seriously infringe on the rights of transgender individuals.

Colbert opened his segment about the memo by describing why he believes it is so problematic. As the late-night host told the audience:

There’s more random cruelty from the Trump administration coming down the pike. This time, they spun the wheel of discrimination and they landed on "transgender," because we just learned of a new Trump plan in which they would narrowly define gender as a biological condition determined by genitalia at birth, which means that transgender people could be defined out of existence.

The comedian then continued to reflect on the issue and expressed repeated shock that the administration is considering reframing the concept of gender. "You can't just redefine something to make it go away," Colbert said. He then joked, "I learned that the hard way when I tried to convince everyone in high school my nickname 'Skid Mark' was because of all the cool driving moves I did."

Colbert then noted that the administration is contemplating moving forward with the creation of new federal guidelines that would define gender "on a biological basis that is clear, grounded in science." Notably, as The Washington Post reported, science actually says the opposite — that biological sex and gender are two different concepts. On his show, Colbert took the administration to task for the memo's use of the word "science," exclaiming, "Oh, now you care about science? How convenient!" The comedian made it clear that his joke was mocking the Trump administration's general antipathy toward climate change science.

The late-night host wrapped up his segment with a joke that made it apparent that he disagrees with the memo's suggestion that gender is an entrenched concept. As Colbert asserted:

Look, gender is clearly a spectrum, OK? We know this. ... For instance, I identify as a man, but it’s a little fluid. I enjoy getting my hands dirty and repairing boats, then again, my favorite book is about elves and jewelry.

As Vox explained, right now the redefinition of gender mentioned in the memo is a proposal being considered by the Trump administration, but not an official policy with which it has moved forward. However, as The New York Times described, the Department of Health and Human Services is reportedly preparing to share this new definition with the Department of Justice (DOJ) prior to the end of 2018. As the paper noted, if the DOJ thinks the new definition is legal, it would then be incorporated into federal policies and federal agency documentation.

If the administration does indeed move forward with this proposal, it would essentially eliminate all anti-discriminatory protections for transgender individuals, as Vox described. Clearly Colbert, along with many others, believes that there are myriad problems associated with Trump's anti-transgender memo — and he's making sure that his audience is aware of its potential ramifications.