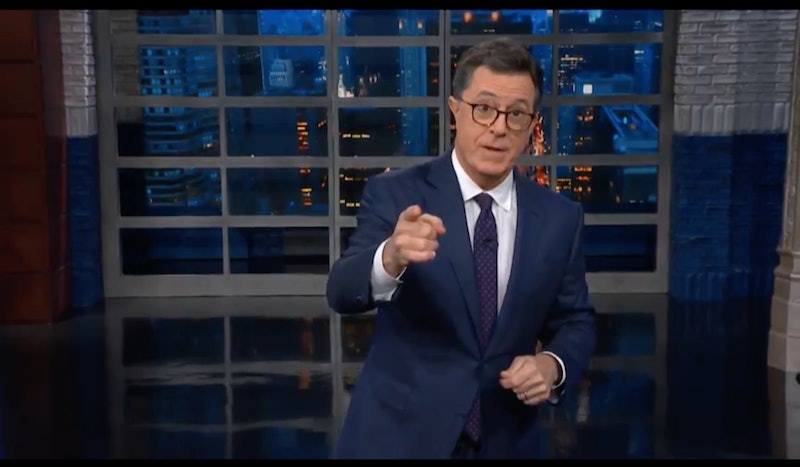 The Late Show with Stephen Colbert/CBS

On Tuesday's episode of The Late Show, Stephen Colbert explained why he believes Trump's "nationalist" comment is so problematic, taking the president to task for using the term. Trump initially asserted that he was a "nationalist" during a rally in Houston on Monday, despite many of the negative connotations associated with the word.

On his show, Colbert played a clip of Trump at the Houston rally. During his speech at the event, the president asserted:

In responding to the clip, the late night host pointedly explained why he believes the president should not be employing the word "nationalist." "You know why you're not supposed to use that word? Because it's the second half of 'white nationalist.'" Colbert exclaimed. "Chopping off the first word doesn't change what it means in our minds. 'Oh, look, look, I'm a Klux Klan, I have no idea which one!'"

As the New York Times explained, the term "nationalist" typically has negative connotations in both the domestic and international spheres. Domestically, the term can be associated with extremism and with the concept of white nationalism. Internationally, American foreign policymakers sometimes use the word to characterize foreign politicians or movements which they believe are threats to the stability of other countries.

Despite these negative associations with the term, Trump still doubled down on his use of "nationalist" during a discussion with journalists at the White House on Tuesday, as CNN reported. In responding to a reporter's question about whether his comment was a "dog whistle" to white nationalists, the president replied, "I've never even heard that. I cannot imagine that. I never heard that theory about being a nationalist ... But I'm somebody that loves our country." Later on in the discussion, Trump asserted that he believes he's a nationalist because he wants to prioritize U.S. interests on the global stage. "So in that sense, I am absolutely a nationalist, and I’m proud of it," the president stated.

In addition to addressing Trump's nationalism comment, Colbert also briefly reflected on the president's remarks about globalism at the same rally. In Houston, the president told crowds, "You know what a globalist is? A globalist is a person that wants the globe to do well, frankly, not caring about our country so much. And, you know what, we can't have that!"

After playing a clip of Trump's remarks, Colbert appeared perplexed, joking, "He does realize America is on the globe, right?" The comedian then did an impression of the president, saying, "Look, who cares about global warming, wake me up when it's America warming."

Overall, it's readily apparent that Colbert found Trump's comments at the Houston rally highly problematic. It remains to be seen whether Trump will continue to characterize himself as a nationalist or whether he will employ different terminology in the future.