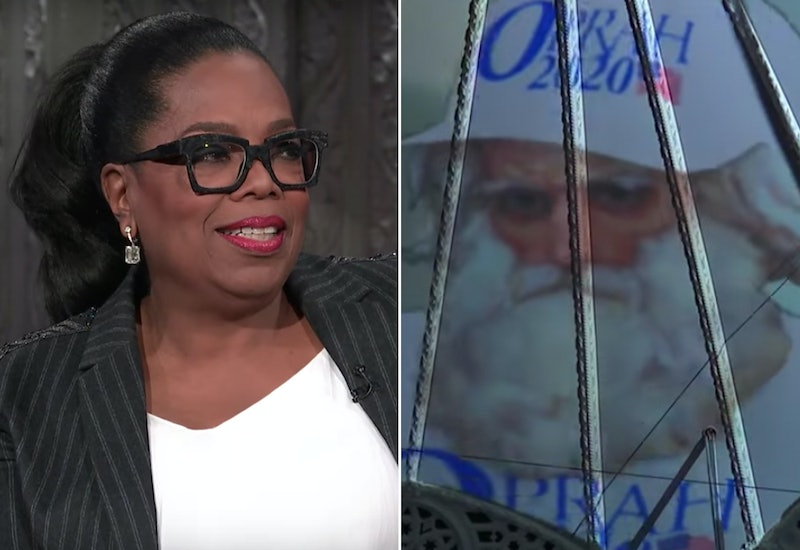 Oprah Winfrey has finally received an awaited spiritual signal that she should run for president. While fans have been crying "Oprah 2020" since she delivered an unforgettable speech about the #MeToo movement during the Golden Globe awards in early January, the actress herself has repeatedly said that she doesn't think she's right for the job. But on Tuesday night Oprah got a "sign from God" on Stephen Colbert's late night show that indicated otherwise.

In an interview with People magazine earlier this week, Oprah mentioned that she's been praying to help her decide whether or not to run, asking, "'God, if you think I'm supposed to run, you've gotta tell me, and it has to be so clear that not even I can miss it.'"

Colbert brought this up when she appeared as a guest on his show on Tuesday. "Have you had any signs at all?" he asked, to which she replied, "Not one."

Or not yet. No sooner had she finished than an animated image of an old bearded man with wild white hair appeared projected onto the ceiling of Colbert's stage. "Oprah, Stephen, what's up?!" his voice boomed.

"Can I help you, Lord?" Colbert asked. "I'm kind of in the middle of talking to somebody important."

"I hear thou seekest a sign. Well, is this clear enough?" he said, and held up a white sign with a single word on it: "RUN!" When Oprah didn't appear convinced, he continued: "How do I make this clearer? Oh, I know!" The figure ducked down for a moment and then reappeared wearing campaign paraphernalia. "Oprah Winfrey 2020! Yes she can!"

Unluckily for Colbert's cartoon God, Oprah was not convinced by this show of support.

"Okay, Lord, let me just say this to you," she said. "It's not something I've ever seen myself doing. It's not the kind of job that you can have without fully devoting yourself to it 100 percent."

"Not really," God countered. "Have you seen this White House?"

Of course, that's the reason why so many people have been calling on Oprah to run: because they're inspired by her. Winfrey's moving Golden Globe awards speech deeply moved many and reminded audiences of her rhetorical prowess. In fact, her words have become so popular that Spotify added a recording of the address to its streaming platform. Ahead of the next presidential race, Democrats are anxiously looking for candidates who can deliver a rousing speech, especially because one of Hillary Clinton's biggest failings is often considered to have been her inability to inspire a wide enough range of people.

Oprah certainly has that power. From hosting her decades-long talk show along with its famous book club to engaging in philanthropic activities, she's known for her ability to lift others up. Her Golden Globes speech was no exception. She used the platform to celebrate the perseverance of a recently deceased black woman, Recy Taylor, who had been the victim of rape and abduction by a group of white men in 1944.

Oprah pushed for racial and gender equality and brought up #MeToo and #TimesUp in the speech. At its end, she offered an optimistic forecast for the future, declaring that "a new day is on the horizon." She noted that everyone she's ever interviewed has shared "an ability to maintain hope for a brighter morning, even during our darkest nights."

Although the United States will continue to benefit from Oprah's eloquence outside of the political arena, it's unlikely to see her become a presidential candidate. Other Democratic potentials whose names have been floated include Sen. Kamala Harris (D-CA), Sen. Cory Booker (D-NJ), Sen. Kirsten Gillibrand (D-NY), Sen. Elizabeth Warren (D-MA), and Sen. Bernie Sanders (Ind-VT).