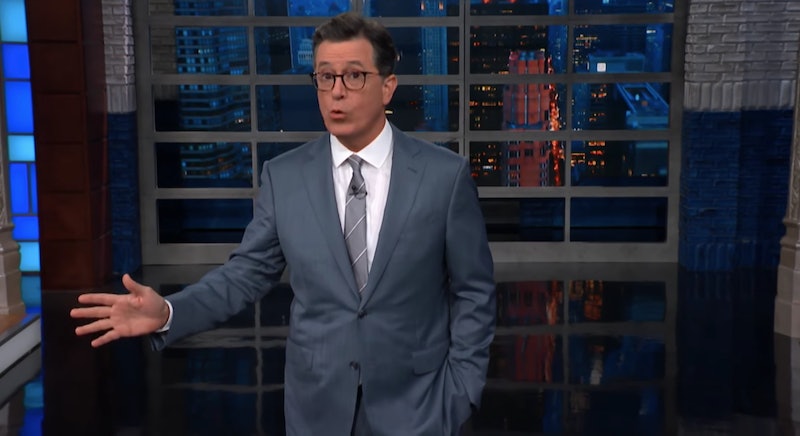 The Late Show with Stephen Colbert/CBS
By Sarah Friedmann
July 11, 2018

On The Late Show on Tuesday night, host Stephen Colbert mocked Brett Kavanaugh, taking the Supreme Court nominee to task for how he spoke about women during his speech on Monday. Colbert pointed out that Kavanaugh seemed to imply that knowing some women constitutes the same thing as advocating for their rights.

Colbert discussed Kavanaugh's nomination at length during his opening monologue on Tuesday night. The late night host introduced the topic of Kavanaugh and women by noting that many people are concerned about the future of Roe v. Wade, the landmark federal abortion rights case, if Kavanaugh is confirmed to the Supreme Court. Some think that Roe v. Wade could be overturned with Kavanaugh's potential addition to the court, as it would become decidedly more conservative.

The late night host noted that Kavanaugh seemingly sought to ease people's concerns about his stance on women's rights during his speech by taking "great pains to reassure us that he knows some women." Colbert then played a clip of Kavanaugh speaking at the White House, in which the Supreme Court nominee described the women in his life. In the clip, Kavanaugh asserted, "My mom was a trailblazer ... the majority of my law clerks have been women. I have two spirited daughters. For the past seven years, I've coached my daughter's basketball teams ..."

Colbert responded by poking fun at Kavanaugh's apparent attempt to identify with women and girls. The comedian joked, "I own three Indigo Girls albums. My favorite boat is named after a woman. I have my own pair of traveling pants. I eat Jamie Lee Curtis poop yogurt."

Following his commentary on Kavanaugh's words about women during his nomination speech, Colbert then moved on to speculating why President Trump may have chosen Kavanaugh as his SCOTUS nominee. Colbert subsequently revealed that Kavanaugh once wrote an article in 2009 in the Minnesota Law Review in which he suggested that sitting presidents should not be investigated or indicted. In the article, Kavanaugh noted,

Colbert suggested that Kavanaugh's stance on whether or not a sitting president can be investigated may have constituted the impetus behind Trump selecting him as a nominee. Trump is currently under investigation as part of the special counsel probe into the Trump campaign's alleged ties to Russia. Trump has denied these allegations many times, saying "I have nothing to do with Russia."

The late night host found it ironic that Trump picked a nominee with such a seemingly strong stance on the issue of presidential investigations. "Hmm, ... So, Trump picked the guy who thinks presidents shouldn't be prosecuted," Colbert commented. "That's like [Golden State Warriors player] Steph Curry picking the ref and the ref previously ruled, 'Warriors number one, woo!,'" Colbert joked.

Colbert also criticized Kavanaugh for arguing that presidents should not be investigated because of the difficult nature of their job. The comedian then commented, "So, he [Kavanaugh] thinks the president should be above the law because his job is hard? Well in that case I say that moms of three or more kids should be able to murder at will."

The host proceeded to wrap up his monologue by criticizing Kavanaugh for his stance on other issues, including gun control, and for his reported role in myriad notable partisan political clashes over the years. It is seemingly clear that Colbert has some concerns about Trump's nomination of Kavanaugh as the next SCOTUS justice, particularly when it comes to women's rights and Kavanaugh's stance on prosecuting presidents. As Kavanaugh's confirmation hearing gets underway, you can bet that Colbert will have a lot to say about the information revealed during the process.