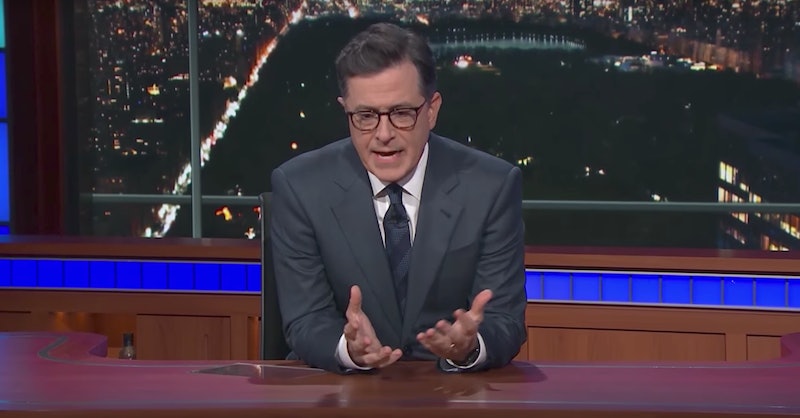 The Late Show didn't begin with comedy on Monday night. Instead, host Stephen Colbert soberly addressed the studio audience, speaking out on the mass shooting in Las Vegas on Sunday night. "Today the national conversation is about the shooting in Las Vegas, and jokes aren't appropriate to address the shock, and the grief, and the anger we all feel," he acknowledged. Then Colbert implored Trump to take action after Las Vegas. He acknowledged the very real need for prayers for the victims, but argued that won't be enough.

Colbert tried to convince Trump to "do something the last two presidents haven’t been able to do: pass any kind of common sense gun legislation that the vast majority of Americans want."

He started off with Trump's own words, that the attack was "an act of pure evil." Colbert didn't disagree. "I think he’s right,” Colbert started. “So what then are we willing to do to combat pure evil?" He had an argument:

The answer can't be nothing. It can't. This time it was a concert in Las Vegas. Last time it was Republican congressmen, and their staff, under fire on the ball field ... Doing nothing is cowardice. Doing something will take courage.

That might seem like a tall order for a divided Congress and a divided country. But, Colbert pointed out, just last week Rep. Steve Scalise, the Louisiana Republican congressman who has been recovering from gunshot wounds from that baseball game attack, returned to Congress. "Scalise returned to the floor and was greeted by a bipartisan hero's welcome," Colbert said. "It was the kind of moment that gives you hope that Congress might work together for the common good."

Then he called on Trump to make the change. “Now, President Trump, you said you want to be a transformative president, who doesn’t care about the way things have always been done in Washington D.C. This is your chance to prove it, and I mean it sincerely," Colbert said.

He tried to explain to Trump one way to get it through. "You do not owe the Republicans anything. You know the Republicans tried to stop you from being president. Well, screw 'em. You want to make America great again?" Colbert asked.

Colbert acknowledged those who were grieving and suffering, but he argued that was even more a reason to act. "Once again we want to send our thoughts and prayers to the victims and their families, and everyone who was hurt by this unimaginable cruelty," Colbert said. "Now terrible things happen in the world, sometimes like today we feel they've risen to a new level, but we cannot accept that as a new normal."

He ended with a final plea to the president. "Because if we are facing pure evil, then by all means offer thoughts and prayers, but think about what you need to do, and then pray for the courage to do it."