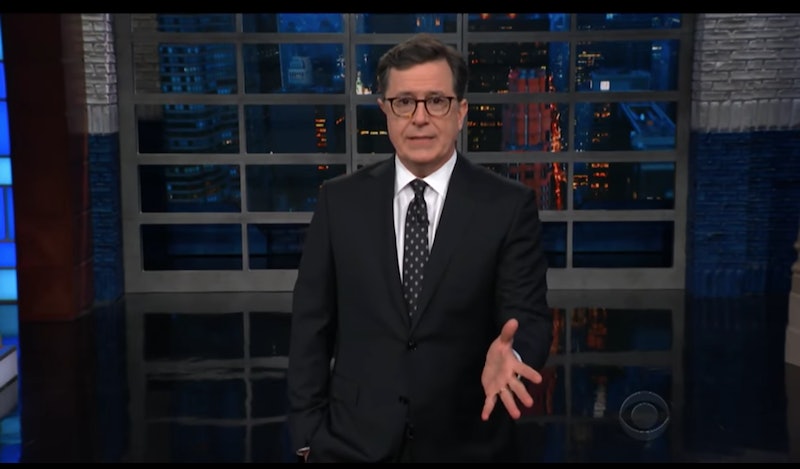 The Late Show with Stephen Colbert/CBS
By Sarah Friedmann
April 10, 2018

On Monday's episode of The Late Show with Stephen Colbert, the host reflected on a recent FBI raid of the offices of Trump's personal lawyer. In fact, Stephen Colbert revealed he thinks Michael Cohen got raided because President Trump seemingly encouraged authorities to dig deeper into the $130,000 payment Cohen gave to adult actress Stormy Daniels, otherwise known as Stephanie Clifford.

Cohen's offices in New York were raided by the FBI on Monday following a tip from Special Counsel Robert Mueller. As The New York Times reported, FBI agents reportedly sought records related to Cohen's $130,000 payment to Daniels, as well as several other matters. Daniels alleges that Cohen paid her $130,000 in exchange for her signature on a non-disclosure agreement that would prohibit her from discussing an alleged affair she had with Trump. While Trump denies the affair and denies having any knowledge of the payment, Cohen has acknowledged making the payment. The attorney has said that the money came from his personal funds and that they were not in any way associated with the Trump Organization or Trump campaign. Cohen has not, however, said why he paid Daniels.

In the beginning of his monologue, Colbert played a clip of Trump's recent comments on the $130,000 payment. In the clip, Trump is answering questions aboard Air Force One on April 5. When asked if he knew about the payment Cohen had made to Daniels, Trump responded "No." Then, when asked why Cohen had made the payment, Trump replied, "You'll have to ask Michael Cohen. Michael is my attorney. You'll have to ask Michael."

Colbert appeared aghast at the clip and suggested that Trump may have inadvertently encouraged officials to further look Cohen's records. As Colbert stated, "So, he said on camera, just to recap, 'You'll have to ask Michael Cohen.' Well, guess who watches TV? Robert Mueller. Because today on a tip from Mueller, 'the FBI... raided Cohen's office, seizing records related to several topics, including payments to a pornographic film actress.'"

Colbert then proceeded to jokingly try to reassure Cohen in light of the office raid. "All hope isn't lost, Michael Cohen," the comedian said. "I'm sure the FBI will keep this whole thing quiet for $130,000," he added.

The late-night host then highlighted other potential problems that the payment to Daniels could cause for Cohen. As Colbert described, if President Trump indeed did not know about Cohen's payment to Daniels, it could spell trouble for the lawyer's career.

"Of course, if Trump really knew nothing about this, Cohen was already in deep trouble," Colbert said. "Because entering into an agreement on the behalf of a client who doesn't know you're doing that agreement is grounds for disbarment in New York."

"If that happens, Trump's legal team will be down to Ty Cobb, Jay Sekulow, and a DVD of Matlock," the comedian added, mocking Trump's reported trouble finding legal representation.

Daniels' lawyer Michael Avenatti has revealed that Trump's denial that he knew anything about the payment could be good for his client's case, as Daniels is seeking to be released from the non-disclosure agreement. Avenatti shared these sentiments on Twitter, saying, "Good (actually GREAT) things come to those who wait!!! The strength of our case just went up exponentially ... You can’t have an agreement when one party claims to know nothing about it."

Thus far, the full picture of why Cohen is receiving scrutiny from the FBI is not yet known. As Matt Apuzzo of The New York Times described, "payment to the pornographic film actress, Stephanie Clifford, who is known as Stormy Daniels, is only one of many topics being investigated." Colbert certainly seems to think that Trump's comments aboard Air Force One may have encouraged Mueller to tip off the FBI to take a closer look at Cohen. If Colbert's speculations indeed reflect reality, it would be quite ironic, considering Cohen is Trump's longtime attorney.