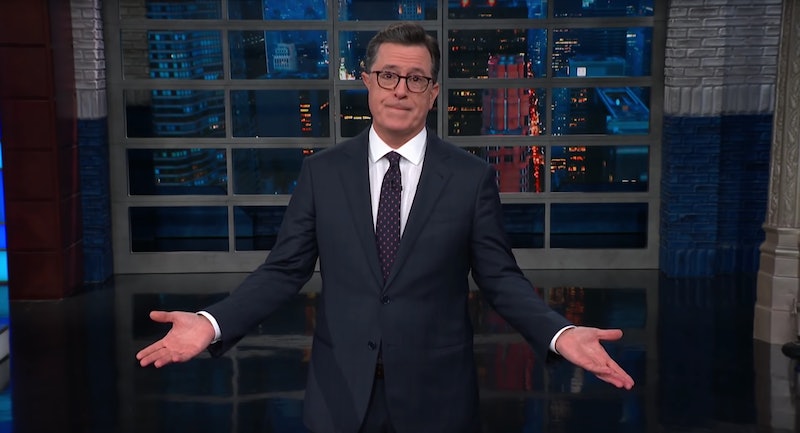 The blue wave continues: A Democratic win in the 3rd District of New Jersey on Wednesday left liberals with 34 seats gained in the House and the potential for more. Reports indicate that the president is deeply unhappy with the midterm results — whereas one late-night comedy host is much happier. Stephen Colbert thinks Trump's midterms response is hilarious because the president is to blame, he believes, for GOP losses.

"Does he not own a mirror?" Colbert joked on Wednesday, and mimicked Trump: "'You did it, Mirror Man. Stop copying everything I say and do.'"

Colbert began the show by referencing a Tuesday story in the Los Angeles Times that reported Trump is angry about the midterms results and taking it out by raging at White House staffers and reneging on presidential events. He skipped a ceremony of world leaders honoring the 100th anniversary of the World War I armistice, instead staying in his hotel room (he has said that was due to weather and travel conditions), sent Secretary of State Mike Pompeo in his place to meet with the king of Jordan, and opted out of a trip to visit the troops he sent to the U.S. border as a statement against the migrant caravan. Eli Stokols at the Times reports that "Trump has retreated into a cocoon of bitterness and resentment."

"Yes, Trump is entering his larval stage," Colbert joked on Wednesday. "And in just a few weeks he will emerge as a hideous, race-baiting butterfly."

Late-night host James Corden also found comedy fodder in the Times' metaphor. "Multiple sources told the Los Angeles Times that since the midterm elections, President Trump has, quote, 'retreated into a cocoon of bitterness and resentment,'" he said on Wednesday. "When she heard this, Hillary Clinton was like, 'Oh, great, now you're going to take this job from me, too?'"

A Tuesday story in Politico also delved into the president's bitterness about the midterms but noted that it didn't necessarily stand out in the broader context of his behavior as president. A former White House official told the outlet, "The Trump administration has been so consistently off the rails that days like today just blend into everything else." Colbert also brought up this quote on Wednesday.

"Ah," he said, "just one of those typical days where each moment of hollow malice blends into the next, when the future and the past narrow into a speck of dim rage racing forever into the vacuum of the president's mangled, unquenchable ego. Mondays, am I right?"

NPR reports that Democrats have won 34 seats and counting with Kim's victory in New Jersey, which makes this blue wave the biggest since the post-Watergate election of 1974. Eight races are still undecided and five of those may favor Democrats, per NPR: Two in California and one each in Maine, New York, and Utah.

As the Washington Post's Paul Waldman put it on Wednesday, "Nobody likes losing, of course, but nobody hates it more than Trump."