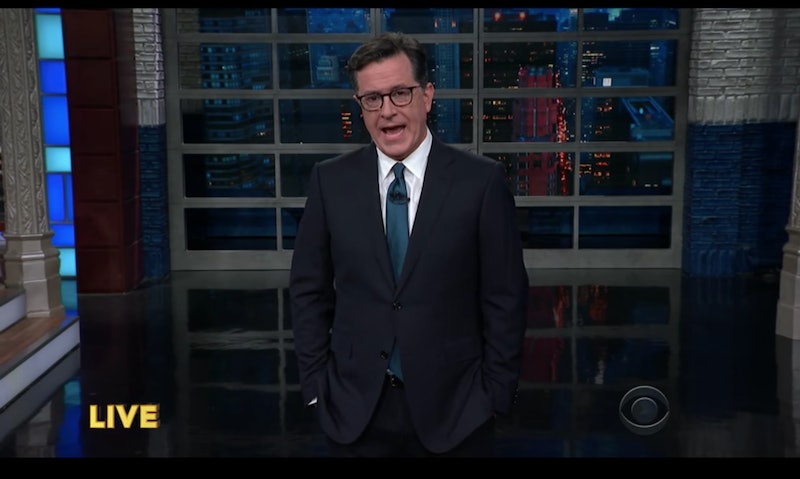 The Late Show with Stephen Colbert/Youtube
By Sarah Friedmann
Jan. 31, 2018

On Tuesday night's episode of The Late Show with Stephen Colbert, the host went live to respond to Trump's State of the Union (SOTU) Address. Stephen Colbert's live SOTU response absolutely roasted Trump, delivering zinger after zinger on a host of topics.

Colbert opened his live show by greeting his audience, saying "We are live right now, and barely conscious following a 90-minute speech." He started his monologue by saying that there were some "bright spots" in Trump's State of the Union speech, noting the presence of House Majority Whip Steve Scalise, who is recovering from being shot during a Congressional baseball game, and of a police officer who adopted an addict's baby, among others. Colbert then suggested that some of the event's attendees stood in stark contrast to Trump, saying:

Some amazing people there were in the gallery. Honestly, some of the most beautiful, most impressive Americans you could imagine And the president was there, too.

Colbert also did not hold back when it came to critiquing Trump and his wife. Melania,'s marital dynamics, which have particularly come under scrutiny recently (the First Lady's office has denied that the couple is facing any problems) . Colbert noted that the First Lady arrived at the event separately from her husband. He also played a clip of her clapping in the audience when her husband first entered the room to give his speech. Colbert commented that the clip showed her looking "radiantly happy?"(despite her appearing to have a frown on her face).

A bit later in his monologue, Colbert moved to discussing Trump's comments on recent natural disasters, with the president saying, "We have endured floods and fires and storms ... to everyone still recovering in Texas, Florida, Louisiana, Puerto Rico, and the Virgin Islands, everywhere. We are with you, we love you, and we always will pull through together, always."

Colbert eviscerated Trump's comments, seeming to refer to the administration's reported lackluster hurricane response by saying, "That is going to be a comforting message to people of Puerto Rico, once they have electricity to turn on their TVs. Still a million people, right? A million people in Puerto Rico still don’t have power.”

Later Colbert again took swipes at Trump and Melania's relationship as well as at his family, some of whom hold senior roles in his administration. First, the late night host mocked Trump's promotion of his tax plan, in which the president bragged that the first " ... $24,000 earned by a married couple is now tax free." In response, Colbert retorted, "a benefit Trump will be enjoying for a few more weeks at least ... who knows, they'll make it until April 15 [tax day]."

Colbert then played another clip of Trump saying, "All of us together as one team, one people, and one American family can do anything," as he delivered his address. The late night show host jokingly agreed, saying,

Yes, one American family can do anything. Promote your shoe brand. Use your relationship with the president to sell real estate in China. Anything. Yes, give it up for the Trumps. Family values.

Colbert continued with a barrage of cutting jokes throughout his monologue, critiquing Trump's comments on health care, foreign policy, and beyond. The host's entire monologue lasted nearly 14 minutes.

Some on social media loved Colbert's critique, with one user calling it "lit" and another thanking Colbert for "saving us" from Trump. However, others were less than thrilled, with an individual characterizing it an unoriginal for its intensive focus on Trump and another characterizing it as standing in contrast to Americans' actual feelings about the speech..

Overall, it is quite clear that Colbert had a lot to say about Trump's first ever State of the Union as president — and that he did not hold back in delivering his critiques of the address.