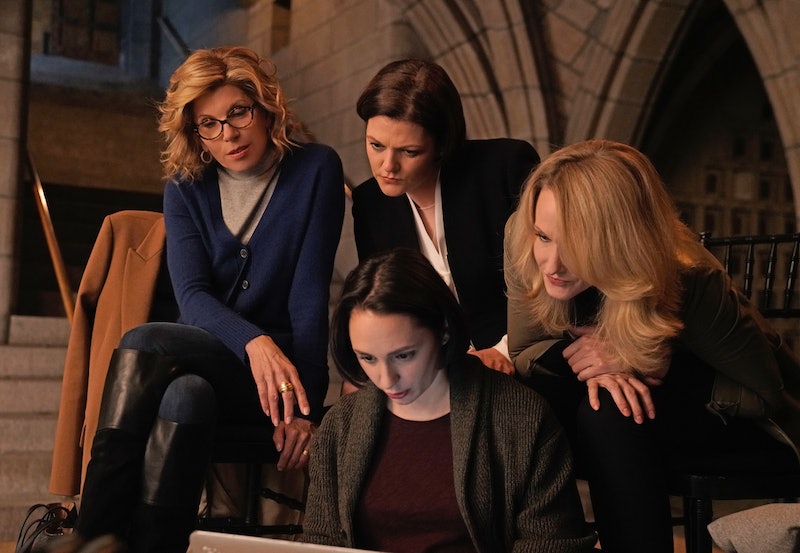 One of the many difficulties of living in Trump's America, especially in The Good Fight's version of the country, is that the problems that existed in America prior to Trump's election haven't gone away and have been forgotten in the wake of new problems arising. While Diane Lockhart is busy joining the resistance in the The Good Fight episode aptly titled "The One Where Diane Joins The Resistance," she is being circled by a former foe from the Obama-era — The NSA. The NSA guys in The Good Fight aren't just a throwback to the franchises' Florrick-days, it's also a chilling reminder of the opposition that is targeting those who are trying to fight against the current administration.

The NSA first started listening in on Diane Lockhart and her associates in Season 5 of The Good Wife, which used a wiretap on Alicia Florrick to investigate the law firms Florrick, Agos & Associates, Lockhart Gardner, as well as the many political connections that Alicia Florrick had through her husband. It appears that the NSA's mission never wore off, as The Good Fight not only suggests that the NSA has been listening in to Lockhart for years, but that they've had the exact same employees on her for the 3 years since the Good Wife finale.

They may have traded their love of goat videos for a penchant for scaring each other with clown videos, but audiences have already met the characters that are spying on Diane Lockhart because they were spying on Alicia Florrick. Michael Urie and Maulik Pancholy reprise their roles as Stephen Dinovera and Dev Jain, respectively, two of many NSA agents the show has featured who drop in on the lives of Good Wife (and now Good Fight) characters and following the characters in the same way that the show's audience do.

Stephen and Dev circle around Diane when her new resistance-minded activism leads to her using five "target words" on a phone call. She says the words Trump, Die, Resistance, Fake News, and Pizzagate in one sentence, which Dev points out is like "domestic terrorism bingo." They suspect she's one the phone with Liz Reddick, indicating that they've been playing close attention to her for a while — probably since the DNC payed their visit to Reddick, Boseman, & Lockhart in season 2, but quickly learn that she's actually on with resistance leader Valerie Peyser.

Stephen and Dev send that name to their higher-ups, and a few scenes later we learn that Valerie Peyser was apparently a grifter who enraged wealthy women against Trump, solicited financial contributions, and then disappears with the money. While Peyser sounds like the Elizabeth Holmes of the resistance, the ever-paranoid world of The Good Fight doesn't clarify if she's actually a grifter. Jay is a usually effecient investigator whose research shows that she's in Rikers, but the fact that Diane then lies to her resistance group about Valerie being busy but not in prison suggests that either Diane is telling a noble lie for a good cause to keep the group alive, or she believes that Valerie has been set up and falsely imprisoned by the Trump Administration.

The NSA's introduction as a major force on The Good Fight is a nice throwback to some of The Good Wife's most memorable moments, but also spells disaster for Lockhart's crusade against Trump. The government knows that she's planning to use Trump-ian tactics for good, such as utilizing fake news to disrupt a bot farm, but the government has the money and resources to keep track of her and try to take her down. Diane's got a tall mountain to face in front of her, but her efforts may be entertaining enough that Stephen and Dev actually wouldn't report her because they want to continue following her story. If she is concerned about being traced by the NSA, however, at least Diane knows she has an old friend she can call for advice.