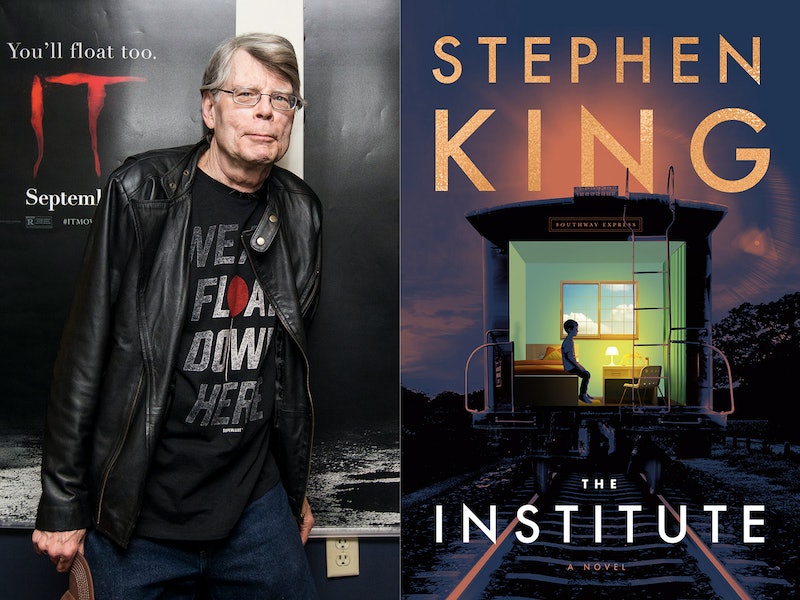 Fans of the Master of Horror got a windfall this week, with the announcement of Stephen King's new book, The Institute, which sounds a lot like IT and Firestarter. Scheduled for release on Sep. 10, The Institute centers on a group of six children, who have been imprisoned by the titular organization because of their special abilities. Here's what we know so far.

Like IT, The Institute focuses on a group of young friends who have been thrown together under extraordinary circumstances. Protagonist Luke Ellis goes to bed at his parents' home in Minneapolis and wakes up, orphaned, at The Institute, "in a room that looks just like his own, except there’s no window." There, he meets Kalisha, Nick, George, Iris, and Avery, who all arrived at The Institute in much the same way. The kids live in Front Half, where Institute director Mrs. Sigsby and her staff push them all to unlock their powers, rewarding them with vending machine tokens, and punishing bad behavior severely. Children who "graduate" Front Half go to Back Half, from whence no one is known to return. Luke has to get out of The Institute, but he would be the first ever to escape.

Longtime King fans will recognize similarities between The Institute and The Shop — a similar organization that first appeared in King's 1980 novel Firestarter. A government agency that produced children with supernatural abilities using the drug known as Lot Six, The Shop also reportedly had a hand in the events of The Mist and The Stand. Whether The Institute has any connection to The Shop remains to be seen, however.

The Institute is the first and only King novel announced for 2019 so far, but that's not to say that there isn't plenty of King to go around this year. On Wednesday, King announced that CBS All Access had picked up a new miniseries based on The Stand, marking the final stretch of a project that had been in development hell for years. The new film adaptation of Pet Sematary hits theaters on Apr. 5, and IT: Chapter Two will premiere on Sep. 6.

'The Institute' by Stephen King
Amazon

Stephen King has published more than 90 books since 1974, when his first novel, Carrie, debuted. The Institute will be his 63rd novel, and it is available for pre-order now from your favorite bookseller. The Institute hits store shelves on Sep. 10, but you can read an excerpt on Entertainment Weekly today.