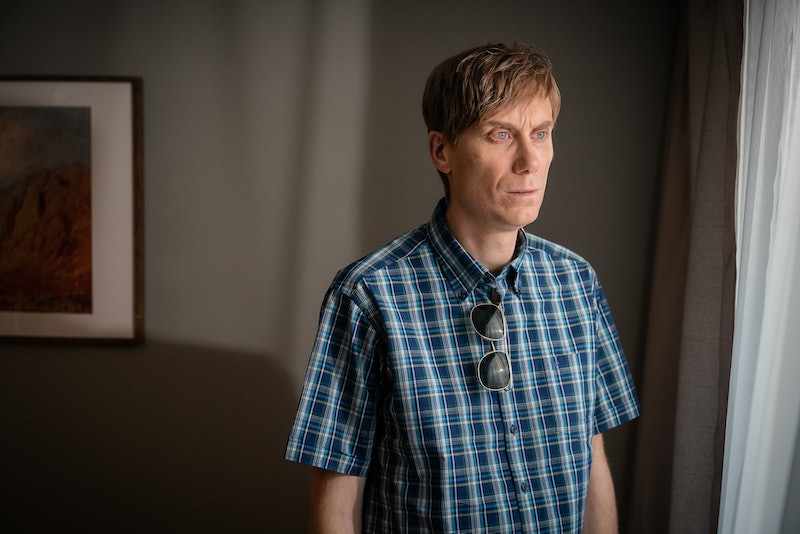 When I first read that Stephen Merchant would be portraying a real-life serial killer in BBC's upcoming factual drama The Barking Murders, I admit I was a little surprised. I mean, he's had dramatic roles in Logan and The Girl in the Spider's Web, but when I think of Merchant I'm immediately drawn to his stand-up and comedic work with Ricky Gervais. But after seeing the BBC's recently released first-look of Stephen Merchant as Grindr killer Stephen Port in The Barking Murders and how hauntingly different he looks, I'm already sold.

Port, who became known as the "Grindr Killer," was found guilty of assaulting, drugging, and murdering four young men between June 2014 and September 2015 after making contact with the victims on the dating app and through other social media sites, as the Guardian reports. The original investigation was met with major criticism which then led to an inquest that was driven by the victims families after it was found that the Metropolitan police failed to catch Port earlier "despite the striking similarities" in the cases.

The BBC previously explored the this in a documentary titled How Police Missed the Grindr Killer, where journalist Sharron Ward investigated how the Met missed vital links in the case, and how the families "desperately tried to get police to investigate their son's deaths," as described by the production company behind the doc, Katalyst Productions.

The drive for justice is the focus of the three-part series, which will be told from the families of the victims perspective instead of from Port's. As the BBC have previously stated, The Barking Murders will focus on "their fight to uncover the truth about what had happened to their lost sons and brothers in the face of a now widely criticised police investigation."

While Merchant has yet to speak about his role as Port, he has previously spoken about stepping outside his comfort zone when he made his West End debut in The Mentalists in 2015. "Yes, I laugh about the cliché of Simon Cowell saying 'you stepped out of your comfort zone' but I think it's true that the more stuff you do the more you look for stuff to scratch a different itch," he told comedy site Beyond the Joke.

And in terms of his role in The Barking Murders, it's more about giving a platform for the victims rather than the role he's portraying. "This is a story that can't be ignored — how four young lives were lost and their families' brave attempt to uncover what happened," he told BBC. "This factual drama will shed light on their story, so it's a privilege to be a part of telling it with the brilliant combination of Jeff Pope, Neil McKay and the BBC." Pope also told the BBC that he and McKay are "so grateful" that Merchant decided to take on "such a difficult and challenging role," and that he "didn't hesitate" when he was first offered the part.

As Bustle UK previously reported, while there is no fixed date or month set for The Barking Murders a BBC representative confirmed that it will be on your screens later this year.