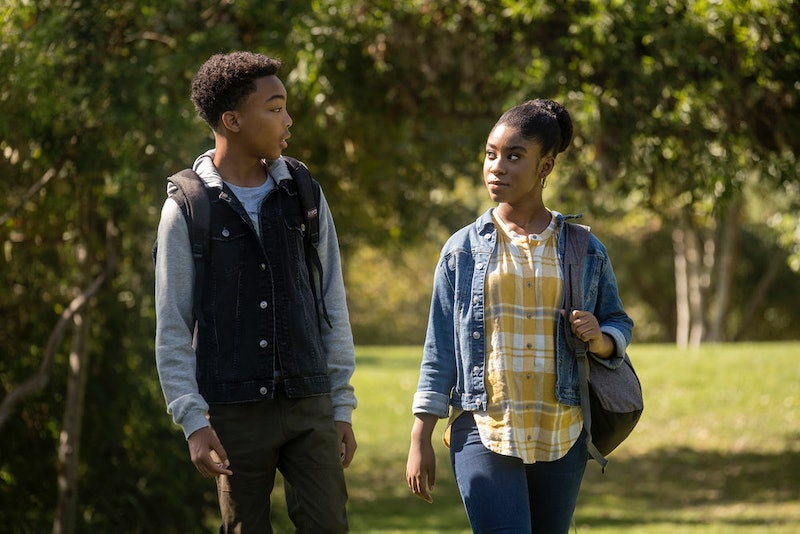 Spoilers ahead for Season 4 of This Is Us. Ahead of the Nov. 4 episode, Sterling K. Brown assured fans that Deja and Malik's This Is Us romance will be far more complex than the trope of a teenage crush. Their relationship will explore what it's like to have so much in common while also feeling worlds apart. “I just love there’s a sort of diaspora of African American representation,” Brown told the Associated Press.

He added, ”This Is Us is all about family and all about connection, and the world of the show continues to expand over the years. But it really does my heart good when, every once in a while, the show becomes very focused on the African American experience through Randall’s family, through these other families that we’ve added to the fold, and they’re not the same."

When Deja (Lyric Ross) and Malik (Asante Blackk) make plans for the first time, she fails to mention to her dad, Randall, that Malik has an infant daughter. In an awkward introduction, Malik lets the cat out of the bag, and Randall, in typical overprotective father fashion, is not amused.

In the new episode, whether or not they have permission, Deja and Malik get some time alone and he shows her around Philly. This story arc was inspired by the alluring chemistry between Ross and Blackk, according to script writer Kay Oyegun, and it's one that's been in series creator Dan Fogelman's back pocket for a while.

“Dan had this desire to have a sort of Before Sunrise-Before Sunset episode essentially devoted to these two teenagers exploring Philadelphia together,” Oyegun said. “You get this lovely romance between these two kids that we rarely see, that kind of space for young black kids that’s not surrounded by violence, that’s not surrounded by hardness or pain or tragedy. It’s really the simplicity of what it means to engage with someone you like, and in the most basic sense of the word."

The teenagers play hooky and skip school to spend the day together, according to the AP, which ultimately unites both families at the dinner table to discuss the "rebellion" that's going down.

That moment mirrors a flashback to Randall's adolescence, where he finds a mentor in his black teacher, Mr. Lawrence, and Jack invites him and his wife over for dinner to talk about it. "I’ll be very frank: A lot of white people feel uneasy talking about race. Black people talk about race quite often, mostly because it’s something that’s a part of our daily lives," Oyegun told the AP. "I think one of the things that we wanted to do with this episode was make it OK to talk about race, was to destigmatize, normalize and begin a fluid conversation about differences, about similarities, and about where and how we can find — not even common ground, there’s just ground, right?”