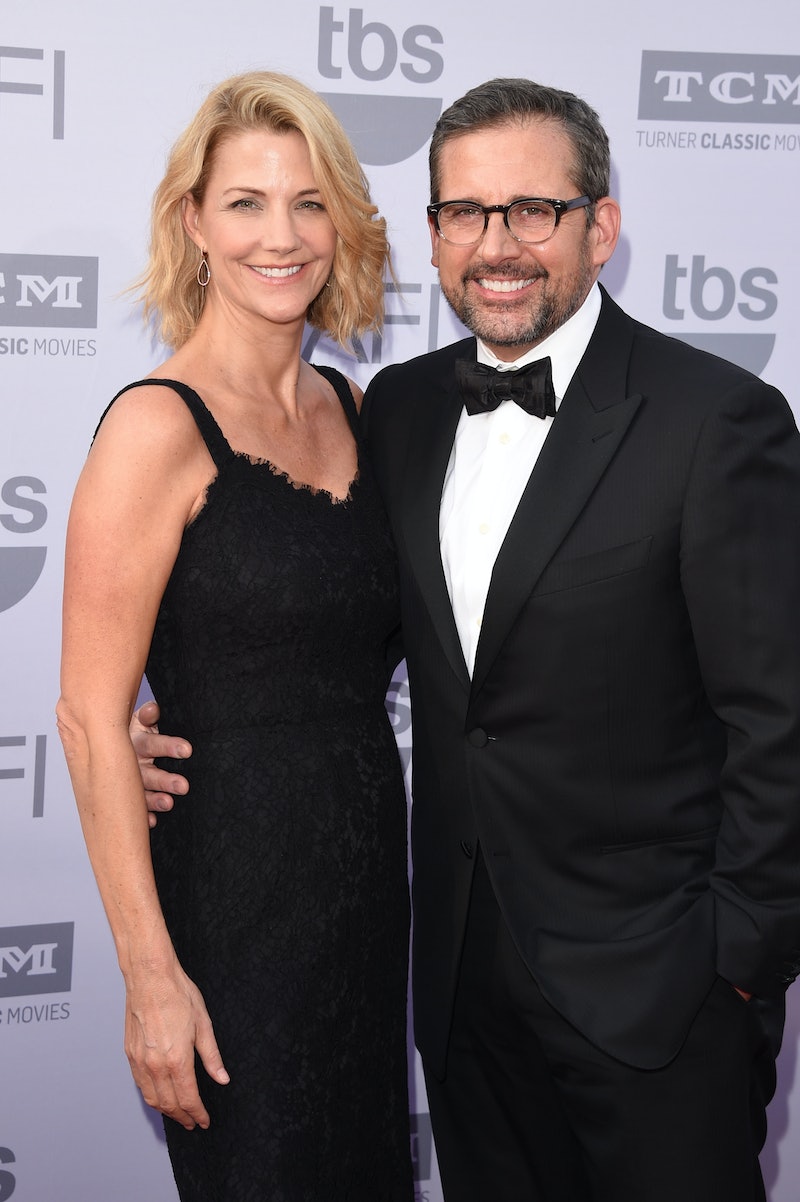 Grab some tissues, because you're going to need them after you read about Steve Carell reflecting on his wedding to Nancy Carell. At the Welcome to Marwen premiere on Monday, the film's star opened up to Us Weekly about the day he married Nancy. Yes, it was the happiest day of his life, which is beyond sweet. That said, the words Steve chose to describe their special day are beyond beautiful and show it was one of the easiest decisions he's ever made. Steve is clearly a romantic at heart and it would make Michael Scott so proud.

Steve and Nancy got married in 1995, and, of course, it wouldn't be a wedding without some issues. For the Carells, it was having their wedding inside an extremely hot church that didn't have air conditioning. As Steve described to Us Weekly,

"We were back east in Massachusetts, and it was over 100 degrees and humid, and the church didn’t have air conditioning and I was sweating bullets. I’ll never forget it."

As uncomfortable, hot, and sweaty as the former Office star was, all he needed was to see Nancy to make everything better. Allow Steve, aka the most romantic man ever, to tell the story:

"I was on the altar and I turned. She was walking down the aisle and I immediately stopped sweating,” he continued. “I was full of this sense of calm because I knew that person was going to be my partner and have my back and I’d have hers. It was literally feeling empowered. It was feeling like I was more powerful because she was a part of my life."

Have you ever heard such heartwarming words? Nancy is one lucky lady to have had him as her husband for over 20 years. Actually, the Carells have been in each other's lives longer than they've been married. They first met while Steve was an improv teacher at Second City in Chicago and Nancy was one of his students.

He told Details in 2013 (via Brides.com) about asking her out,

"I beat around the bush and said something stupid like, 'Well, you know, if I were to ever ask someone out, it would be someone like you.' It's so stupid, but it was all self-protection. She was the same way: 'If somebody like you were to ask me out, I would definitely go out with him. If there was a person like you.'"

According to Brides.com, the two didn't officially become a couple until later on when they both served as The Daily Show correspondents. And now here they are even more in love with two kids (Elisabeth, 17, and John, 14) and as supportive partners who also create projects together, like Angie Tribeca starring Rashida Jones.

This, of course, isn't the first time Steve has gushed about Nancy. In January 2016, he told Entertainment Tonight, "She makes me laugh more than anybody." And when Nancy praised Steve for his role in Foxcatcher, which also earned him his first Oscar nomination in 2015, he told ABC7, "Honestly, that means everything to me. I'm going to start crying before I even get inside."

It's clear Steve loves Nancy with every fiber of his being. To hear him reflect on their wedding day is not only beautiful, but it's heartwarming to learn how much the comedian truly appreciates Nancy for making him a better person.