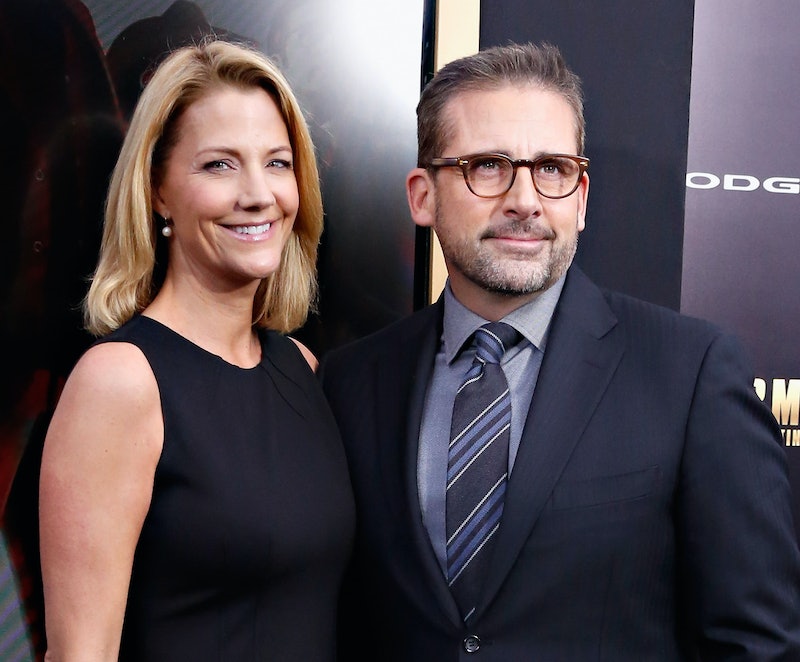 It's really not all that surprising that this former leading man of NBC's The Office is nominated for a Golden Globe. After all, Steve Carell won a Golden Globe for playing Michael Scott and was also nominated a total of six times for his Office role. He's a hilarious and talented man, so it makes sense that Carell scored a Globe nom for Foxcatcher and is creating Oscar buzz. Seriously, when did you ever think Carell would have a chance to win an Academy Award? I did, because he's just that amazing. Well, you know who also is amazing? Steve Carell's wife, Nancy Carell née Walls.

That name might sound familiar, and it should. Nancy is an actress herself, a familiar face in the entertainment world, and as funny as her husband. Not only did she attend Boston College and the Second City Improv Company (where she met Steve), but Nancy has been featured in a lot of TV and movie productions, some even starring her husband. She's even played his onscreen love interest from time to time.

With that said, here are just a few places you've probably seen Nancy. One day (hopefully), we might even see Nancy scoring her own nomination and taking home the awards.

Nancy appeared as Carol Stills and played Michael Scott's realtor girlfriend on The Office. Compared to some of his love interests (ahem... Jan), Carol seemed normal. Somehow, Michael won her over. Nancy and Steve shared some great scenes and hilarious moments together, like the one shown here.

She Was on SNL

From 1995 to 1996, Nancy appeared in 17 episodes of Saturday Night Live. She portrayed several characters, including Kathy Ireland, Diane Sawyer, and Bobbie Battista. She even did some Weekend Update news.

She Played a Mean Game of Tennis in Bridesmaids

In the comedy favorite, Nancy played Helen's tennis partner during that epic game.

She's the Co-Creator of Angie Tribeca

Angie Tribeca is an upcoming TBS project starring Rashida Jones and hails from Steve and Nancy. They're definitely one talented and creative couple. Nancy is also listed as an actress in the comedy and will serve as executive producer.

Watch out Steve, because your wife might be stealing the limelight very soon.