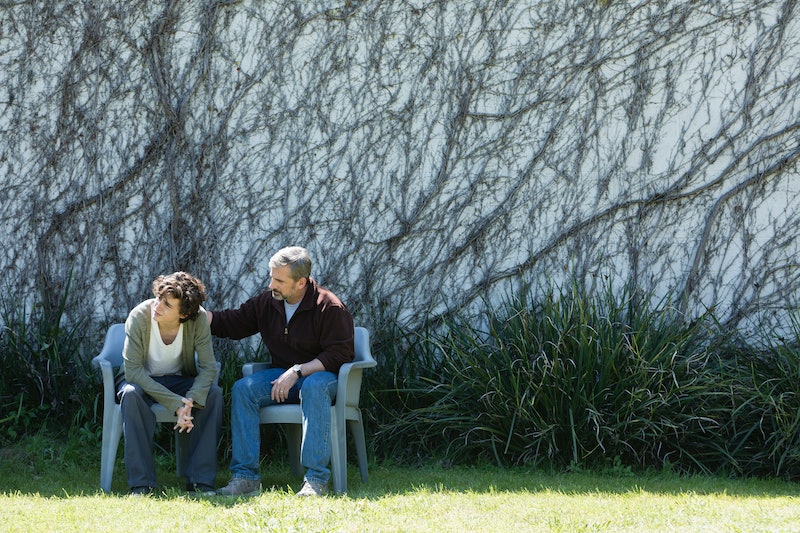 The start of a new year can often feel like a stagnant few months for cinema, as the blockbusters usually don't start appearing until around the end of May. But for smaller, independent movies — this is a period for them to truly shine, and one film in particular is Beautiful Boy, directed by Felix Van Groeningen. While the film isn't set for release until Jan. 18, StudioCanal UK have treated audiences to a Beautiful Boy scene between Steve Carell and Timotheé Chalamet that encapsulates the beauty of this story in such a short amount of time.

Based on the biography of the same name by David Sheff, and his son Nic's follow-up biography Tweak: Growing Up on Methamphetamines, the two novels follow the nature and effects addiction can have on relationships and family, and offers a broader insight into the opioid epidemic that in the United States.

At its core though, Beautiful Boy is about the relationship between father and son, portrayed with emotional brilliance by Carrell and Chalamet. Touching on the personal experiences of being a father and observing a generation fraught with addiction, the actors bring a lot of depth to these characters, making Beautiful Boy all the more relatable.

"A big part of the movie is that [addiction] doesn't discriminate: Anyone can fall victim to it and there aren't any easy solutions," Carrell told USA Today. "It portrays these characters as flawed, and David, in particular, makes mistakes along the way. He doesn't do necessarily what you want the father in the movie to do."

"[I] found it difficult to wrap my head around the concept of denying a child anything, because when you have kids, all you want to do is protect and nurture them. When you see a child spiralling out of control and having no recourse, I can't imagine anything more terrifying. As a dad, it was something I could relate to and pray that I never actually have to [deal with]."

This is somewhat exemplified in this exchange of dialogue between David and Nic. Uploaded by StudioCanal UK on Thursday (Jan. 4), David can be seen sat on the couch in a dimly lit room waiting up for his son. Nic returns home to his father commenting on how late it is, to which Nic replies that he spent longer at a Narcotics Anonymous meeting than he originally planned.

David doesn't seem to be buying it, asking why he wasn't answering his phone — the battery was dead — and then asks if his son can take a drug test. It seems like Nic understands why and while he consents, he points out to his father that his reasoning is contradictory (David says he trusts his son, but he needs proof that he's still clean).

Completely reliant on dialogue with no score to support it, the father and son converse in soft tones complete with empty silences, unspoken words, and the continuous sound of cicadas chirping. Even out of context the scene flows, demonstrating the power that this film has even in a two-minute sequence.

"That was our way of dramatising both characters' struggles, which are largely internal," Groeningen told Roger Ebert's site. "David's anxiety over not being able to help his son is left unarticulated in most scenes, so we had to find another way of showing it."

It's this sort of care and consideration by Groeningen that allows Carrell and Chalamet to shine as David and Nic. There are no epic soundscapes to carry the narrative, nor are there any sweeping shots of cinematography to wow the senses. It's all about David and Nic's relationship, and the ramifications that substance abuse can have not only on a family unit, but on an individual, too.

If you or someone you know is seeking help for substance use, contact your GP or call the Frank drugs helpline on 0300 123 6600.