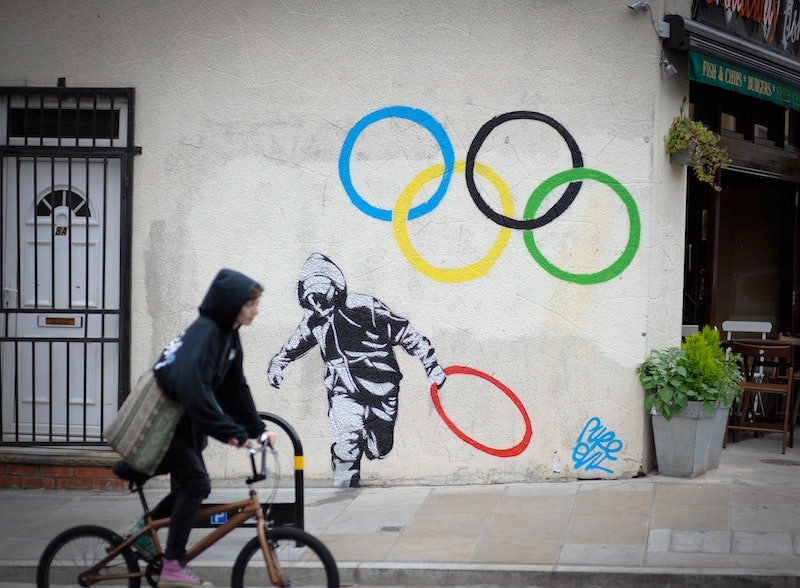 Not only has Banksy proved himself to be an incredibly prolific creator over the years, and one who can his work for big bucks, but he's also managed to somehow keep his identity totally private. However new photographs claim to show Banksy at work, giving us a glimpse of the art world's most mysterious star.

The photographs are published in a brand new book called Banksy Captured. The book comes from the mind of his former agent and photographer, Steve Lazarides, who had the privilege of working with him for over a decade. Speaking about the period he spent working with Banksy, Lazarides said: "[W]e broke every rule in the rule book, along with a fair few laws".

In his new book, Lazarides has photographed multiple shots of Banksy's work, which include some of a man himself out graffing on the streets. However, all you can see is his back, of course.

Lazarides explained how working with Banksy changed his view of an industry he disliked so strongly:

"I hate the art world. I only became part of it because Banksy catapulted the movement into the stratosphere. It was a ride — however, I'm glad I'm out of it and about to enter the next ride."

His view of the art world seems to be very much echoed by Banksy, who has become famous for his antiestablishment leanings. For example, one of his most famous paintings (which recently sold at Sotheby's for £9.9 million) is called Devolvement Of Parliament, shows an image of the British parliament with all of the MPs replaced by primates.

And then there was the infamous incident with Girl and Balloon when i sold at auction back in October 2018. In one of the most memorable stunts of recent times, the moment the gavel came down, something mad happened. The painting shredded itself. Ahead of the auction, Banksy had made a special frame with a shredder hidden in it.

I for one hope that Banksy not only continues messing with the system, but also that his identity remains a secret. One shouldn't meet one's heroes as the saying goes.