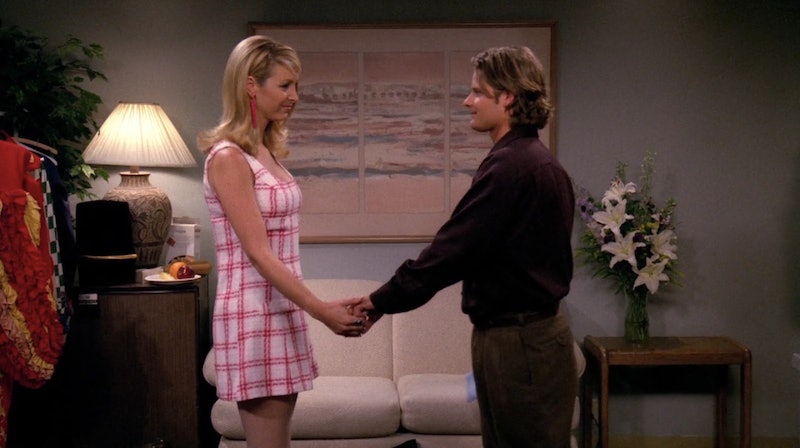 It's been 24 years, but fans are still there for Steve Zahn's Friends cameo. Some may recognize Zahn from Reality Bites or That Thing You Do! or You've Got Mail, but he says that it's his Season 2 guest appearance on Friends that he's most often recognized for. And honestly, he doesn't mind one bit. In fact, he finds it kind of funny.

In a recent episode of People's Couch Surfing, Zahn looked back at his role on Friends where he played Phoebe's secret husband, Duncan. "It was so much fun," Zahn says of the 1995 episode "The One With Phoebe's Husband." In the episode, Phoebe tells a shocked Rachel, Ross, Monica, Chandler, and Joey that she married Zahn's gay Canadian ice dancer to help him get a Green Card. But, turns out, back then, Duncan was just a little confused about his sexuality and now wants to get a divorce so he can marry another woman.

“It was so much fun. I was so nervous,” Zahn said of playing Duncan. “It’s so hard to do these. Sitcoms are hard, man! They’re really difficult. They say it’s just like theater; there’s an audience. No, it isn’t! It’s not even close to theater.”

Also, unlike theater, a TV show lives on in re-runs forever, which means there's always new audiences being introduced to the show. Especially, when it's Friends, which seems as if it's been playing non-stop since it first debuted 25 years ago.

It's why it shouldn't be all that shocking that Zahn, who has since appeared on Modern Family, still gets recognized for Friends. “This show: people were into,” Zahn told People. “Remember, at this time, when this show is playing, there’s, like, 40 million people watching this show!”

Of course, that doesn't mean the actor doesn't find it funny that after all the work he's done — he has 73 credits on his IMDb, including the upcoming TV show Valley Of The Boom on National Geographic — it's this role that has become his most recognizable. “This is what? Four days work in my life?” he told People. “I have people around the world that come up and go, ‘Ah, Friends.' I swear to God.”

That's the power of Must See TV. In fact, a lot of actors have talked about how their Friends roles are still some of their most recognizable. Even Paul Rudd, who played Mike Hannigan and ends up being Phoebe's other husband, still gets asked about Friends.

Rudd said that when he gets recognized on walks down the street, there's three things that he commonly gets asked. "Usually if I'm walking down the street now, people just go, 'Ant-Man.' And then every once in a while they'll say, 'Slap the bass.' They'll say that to me," he said referencing his famous line from I Love You, Man. "And then sometimes I'll get, 'How's Phoebe?'"

Thanks to Netflix and non-stop basic cable re-runs, Friends will live on for a long, long time, which means Zahn won't probably stop getting recognized for playing Duncan anytime soon.