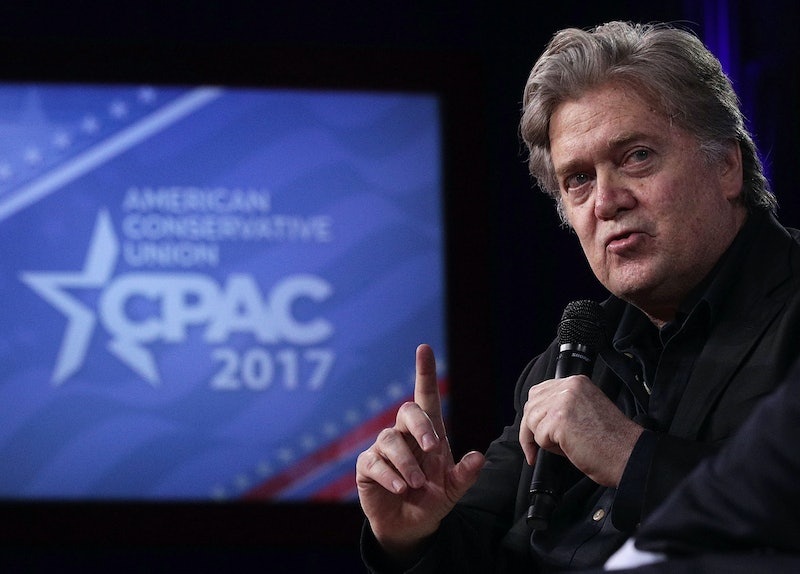 When Donald Trump's chief advisor took the stage at the Conservative Political Action Conference, I don't think anyone on the left side of the aisle expected him to talk about rainbows and unicorns. And, well, he didn't. Although his words were couched in the language of conservative unity, Steve Bannon's comments at CPAC show what Trump's administration really wants — a version of America that works only for some Americans.

Bannon and Reince Priebus took part in a panel discussion with Matt Schlapp, who heads up the American Conservative Union. And while Bannon and Priebus spent a good portion of their time trying to convince the world that they're actually BFFs (despite reports to the contrary), Bannon also brought up the administration's worldview and goals for the country.

One of those major goals, he said, is the "deconstruction of the administrative state." Let's take a moment to break that down, because while it sounds like bureaucratic nonsense, it's actually a serious threat. TheWashington Post's Philip Rucker defines this as all of the taxes, regulations, and international trading deals, which people like Bannon believe threaten national and personal sovereignty. As we've seen with the way Trump's (or Bannon's, perhaps) agenda is playing out so far, though, they're not just talking about erasing taxes and regulations in the small-government, typical conservative sense.

Regulations aren't just on the books because lawmakers want to practice their typing. They're there to protect people, oftentimes people who might otherwise be discriminated against. And Bannon's worldview, if implemented, could put those people in danger.

The world got to know Bannon when he was the leading Breitbart News to be a "platform of the alt-right," so it's difficult to not connect him with the rhetoric published there. And if you take a look at what that publication has come out with, it doesn't really promote inclusivity.

Progressives have pushed to protect the groups of people Breitbart's articles often insult and have scored huge victories, from allowing women to vote to achieving marriage equality. This has happened through regulations and laws on the books to protect people from the sort of discrimination and outright mistreatment that many minorities have started to experience since the beginning of Trump's campaign. The Obama administration, for example, required that schools let transgender students use the bathroom of their choice, but the Trump administration has now withdrawn that requirement. It's about states' rights, they say — but it takes away the rights, and often safety, of transgender students.

The regulation may be withdrawn, but that doesn't mean that there are any fewer transgender students. Bannon called the United States "a nation with a culture and a reason for being," but based on what he's said, I don't think he and I would agree on what American culture is or what its reason for being is. The "administrative state" exists to protect the rest of us from people like Bannon and Trump — and I can only hope that it will withstand the attack that he's promising.