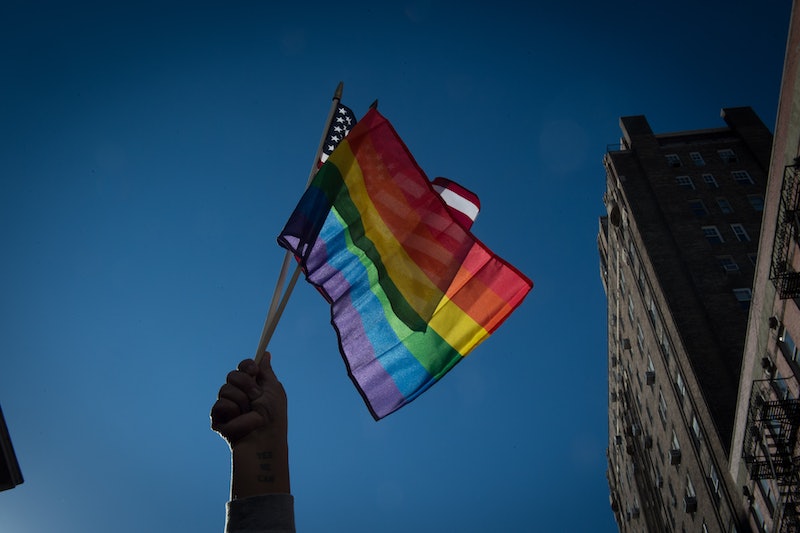 On Wednesday, Oct. 11, the Stonewall National Monument in NYC will get a special addition: the rainbow flag, flying above it permanently. This will be the first time in America's history that the LGBTQ flag is installed as a fixture on federal land, and it's a huge deal. Hopes for LGBTQ rights in the U.S. at the moment aren't exactly at a high, so the installation of a permanent rainbow flag fluttering above a national monument 24/7 represents a hugely historic moment that goes far beyond the symbolism of the flag itself.

Stonewall National Monument is the first American monument to be dedicated to LGBTQ rights, and is named for the nearby Stonewall Inn, which was at the center of the famous Stonewall riots of 1969 that is widely considered the kickoff of the gay rights movement in America. Nearly 50 years later, the advent of the rainbow flag on federal land is meant to represent how far things have come since the riots. The pride flag, designed as a symbol for the gay community by the late artist Gilbert Harvey at the request of gay politician Harvey Milk in 1978, has presided over many great moments in the queer rights movement, but its enshrinement on federal land is meant to remind us of how hard-fought those rights were, and how dangerous America remains for many gay, queer, bisexual, asexual and transgender people.