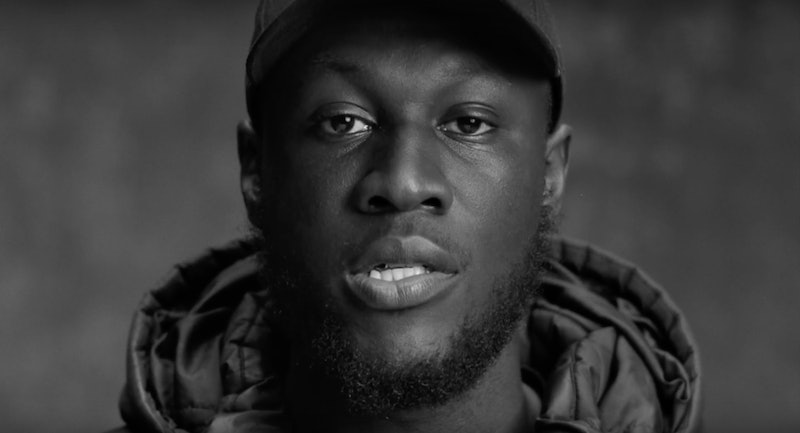 On June 14, 2017, 72 people lost their lives in a raging fire that consumed London's Grenfell Tower block of flats. It has now been 18 months since the tragedy occurred and many still feel little has been done by the government to prevent another fire breaking out or to rehouse the families who lost their homes. In a new video, Stormzy and Adele have united to help Grenfell survivors in their attempts to create change.

The video was set up by the Grenfell United campaign group in a bid to raise awareness of the potentially dangerous cladding that is still present on some buildings. The short black-and-white film sees 25-year-old grime star Stormzy making a physical appearance while 30-year-old Adele provides a voiceover. Marcus Mumford of band Mumford & Sons and musician Akala also feature alongside survivors and people who lost a loved one in the fire.

Although the UK government has said it will ban the use of combustible materials on the outside of buildings that are more than 18 metres tall, buildings that already feature this kind of cladding will not be altered. According to the BBC, flammable cladding is believed to be responsible for the rapid spread of the Grenfell fire and, as the video points out, is currently still on more than 400 buildings in the country.

Campaigners are calling for new regulations that will increase the safety of social housing in particular by ensuring that any dangerous materials are removed from buildings. "We are approaching the second Christmas since our loved ones died at Grenfell," Karim Mussilhy, vice-chair of Grenfell United, said in a statement. "But we've seen little change on the ground and people around the country are still living in buildings with dangerous cladding.

"Too often, people in social housing are treated with indifference by people who have a duty to care for them. We can't sit back while there is a risk another tragedy like Grenfell could happen again. That's why we're fighting for national change."

Stormzy begins the video, which features more than 50 people, with a powerful statement: "This isn't a charity film, this is a clarity film." Indeed, the entire message of the video isn't to ask for money or even people's sympathy, but to ask people to lend their voice to the cause so that politicians will finally listen. Grenfell United is also asking the public to join its campaign.

The entire script of the emotional video reads as follows:

"This isn't a charity film, this is a clarity film. This is about what happened 18 months ago in Grenfell. The voices of those who shouted from the windows. I lost my friend, my wife, my brother, my father. I lost my daughter. I escaped through thick toxic smoke. I was in a coma for two weeks. We stood and watched our homes burn. We saw our neighbours at their windows screaming for help. We talked to them on the phone as they breathed their last breath.

"72 people died in central London. We have lost the people we most loved. Home is where you rest your soul, not where your soul should be made to rest. They say home is where the heart is. I woke up and mine was on fire. We are Grenfell United; we are the survivors and the bereaved. We are raising our voices and we will be heard. We are united for Grenfell to discover the truth because we have to know how the people we trusted to protect us let this happen. We are united for Grenfell because in this country, there are still 441 towers with cladding still on them.

"Politicians can't just let this fade away and leave everything to stay the same. It's too late for our loved ones but it's not too late for yours. We are not asking for money, we are not asking for sympathy, we are demanding change. Change so families up and down the country are safe in their homes. Change so that people no matter where they live are treated with dignity and respect. Will you stand with us? 72 people died in central London and change must come. Forever in our hearts. Never forget Grenfell. Join us. Be united for Grenfell."

The video then finishes in silence while a list of all the 72 people who lost their lives in the Grenfell fire is shown. Many of the famous faces that feature in the video have previously shown support for Grenfell. During the 2018 Brit awards, Stormzy finished his performance by asking Theresa May, "Where’s the money for Grenfell?"

He also appeared on the charity single that raised money for victims' families and survivors. Adele, meanwhile, has made a surprise visit to the firefighters who tackled the blaze, urged fans to donate, and paid for a private screening of Despicable Me 3 for children affected by the fire, the Daily Mail reports.

On Thursday, the first part of the public inquiry into the fire came to a close. As the Guardian reports, survivors have expressed disappointment at the failure of any corporation to take responsibility and that the second phase of the inquiry has been delayed to the point that any concrete answers may not be revealed until 2020.