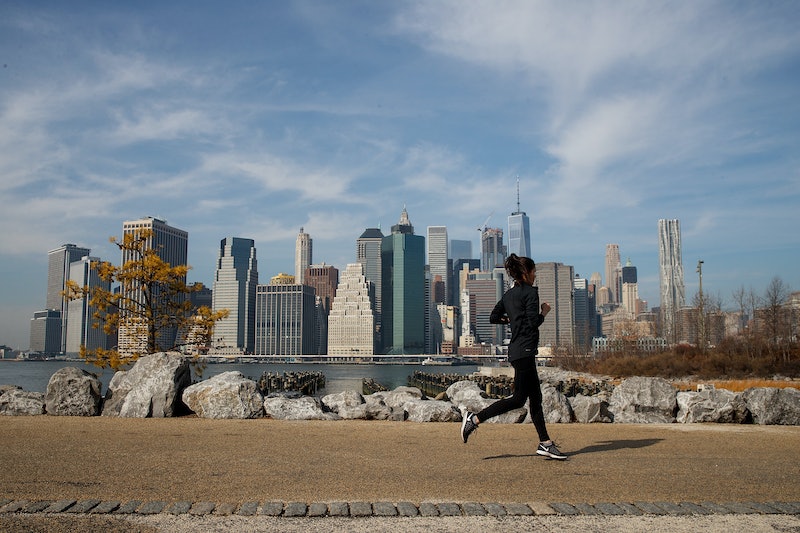 If you run to the bathroom after a jog, you're not alone. According to one study, more than 60 percent of runners have had to stop and poop during a run. There's even a medical term for it: runner's diarrhea, which is characterized by frequent pooping during or after a run. But what causes the people to poop more after a run? Doctors haven't pinpointed a cause, but a new study may have some revealing information. According to a researcher from Old Dominion University in Norfolk, Virginia, stress and anxiety can make you poop more after a run.

The researcher followed 150 runners — 74 women and 76 men — for a month. The participants kept track of their running activity and any digestive trouble during the study and filled out a survey at the end about their stress and anxiety levels. About 45 percent of the athletes had stomach trouble that was worse than a 3 on a 1 to 10 scale, and the runners who had higher levels of stress and anxiety were also more likely to have symptoms. "This study suggests that stress and anxiety contribute to running-related GI distress," the report says. According to Runner's World, the study also found that people who ran at a high intensity were more likely to have gastrointestinal symptoms. Pooping more isn't the only side effect that runners experience — gas, nausea, cramps and acid reflux are also associated with runner's diarrhea.

The study participants also answered questions about their probiotic use, what they ate and drank, their weight and height, and whether they were on antibiotics and pain medication. Per the study, the strongest correlation to post-run pooping was still between stress and anxiety. This is a big deal, mainly because experts suggest avoiding caffeine and high-fat foods before a run to avoid runner's diarrhea. Based on this research, changing your diet may not make a huge difference if your anxiety levels are still high.

Runner's World notes that the survey respondents weren't nervous about a big race or beating an old time — the study asked about their everyday lives and how they usually handle stress. Patrick Wilson, an assistant professor of Human Movement Sciences and the study author, told the magazine that it's possible diet and other factors are still impacting your digestive system. Wilson said the easiest way to figure out why your body freaks out after a run is "to document when, and under what circumstances, the symptoms occur."

Even though diarrhea and other GI issues aren't exactly ideal, don't toss out your running shoes just yet. The health benefits of running are numerous and range from lowering your blood clot risk to extending your life expectancy. You can try to avoid runner's diarrhea by lowering your ambient stress and anxiety levels. If your anxiety is always present, it may be time to talk to a medical professional. If you're overwhelmed with how much is on your to-do list, think about cutting back and doing less.

You can also practice self-care to help lower your stress levels. Activities like yoga, coloring books, and meditation can help you focus and feel less worried. It might make your exercise time slightly less annoying, but the upsides to avoiding chronic stress extend beyond post-run poops. If you're always stressed out, you're at a higher risk for cardiovascular disease, a low sex drive, psoriasis, eczema and more, according to WebMD. Relaxing more often is a great way to boost your mental and physical health, and this study provides yet another reason to prioritize yourself. The next time you prepare for a run, think about your stress levels. Staying calm could help you avoid a frantic trip to the bathroom after you're done running, and it'll also keep you healthier in the long run.