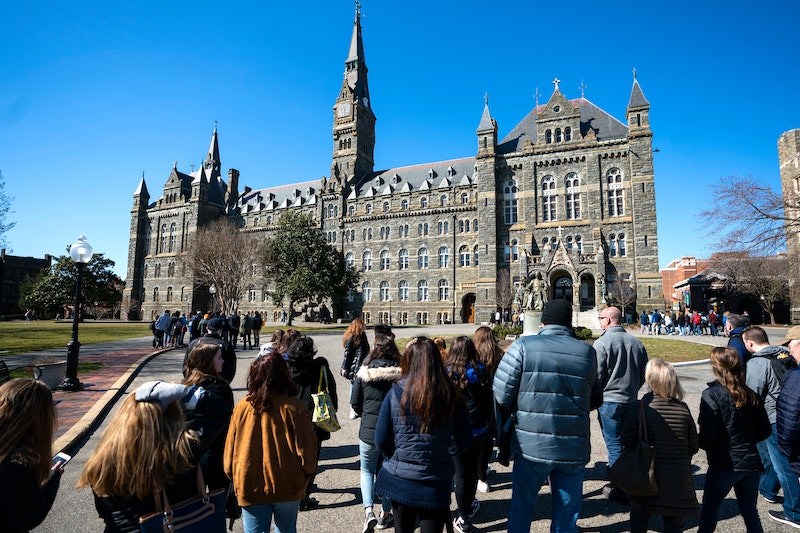 In what's being called the biggest college admissions scandal in U.S. history, the Justice Department announced Tuesday that 50 people have been charged in connection with an alleged scheme to bribe college officials to admit certain students. One of the many unanswered questions about the case is what could happen to the students whose parents allegedly arranged for them to be admitted to theses colleges under false pretenses.

Matthew Miller, the Associate Dean for Learning and Teaching at the Harvard Graduate School of Education, tells Bustle that the students in question should expect some kind of action to be taken regarding their admission status as a result of the alleged scheme.

"For students who knew their applications were fraudulent, I would anticipate revocation of their admission," Miller says.

Predicting what might happen to the students who were sincerely in the dark about their parents alleged actions is a bit harder, Miller says.

"For students who genuinely had no idea their parents may have been fraudulently manipulating the admissions process, it's hard to imagine them retaining their current status with the institution either," he adds. "After all, the decision leading to their admission (and to displacing a different student) was the result of bribery and fraud."

According to ABC 7, prosecutors say that no students have been charged in the investigation thus far, as in many cases the students weren't aware of the alleged scheme.

Victor Goode, a professor at the City University of New York School of Law who's practiced in the area of affirmative action, tells Bustle that the fate of students whose parents are accused of fraudulently securing their admission may lie with the schools — and the Justice Department. Bustle has reached out to the Justice Department for comment.

"It depends on each individual case," says Goode, who also serves as Associate Dean for Academic Affairs at CUNY. He notes that, while authorities say many students weren't aware of the alleged scheme, "some may have known and participated." In those cases, Goode says "ultimately it’s up the schools and to the federal prosecutors."

According to Andrew Lelling, U.S. Attorney for the District of Massachusetts, 33 parents allegedly paid "enormous sums" of money to a college admissions counselor named William Singer to ensure that their children were admitted to the schools of their choice. NPR reported that through several organizations that Singer controlled, he allegedly used this money to falsify academic and athletic credentials in order to secure the children's admissions to Yale, the University of California Los Angeles, the University of Southern California, Wake Forest University, Georgetown, the University of San Diego, and others.

In some instances, Singer allegedly worked with other officials to falsify students' SAT scores, according to prosecutors. Sometimes, parents "supplied Singer with staged photos of their children engaged in athletic activity — such as using a rowing machine or purportedly playing water polo" in order to falsely claim that they were elite athletes, the Justice Department said in a statement. The department said that in other instances, "Singer and his associates used stock photos that they pulled off the internet — sometimes Photoshopping the face of the child onto the picture of the athlete."

"Singer's clients paid him between $15,000 and $75,000 per test, with the payments structured as purported donations" to a non-profit that Singer controlled, the Justice Department said in a statement.

Singer has been charged with racketeering conspiracy, money laundering conspiracy, obstruction of justice and conspiracy to defraud the U.S., and has already pleaded guilty. In total, 50 people face charges as a result of the alleged scheme. They include former and current head coaches at universities, high school administrators, a professor, several celebrities, and CEOs.

The Justice Department noted that in many instances, the students whose SAT scores were falsified "were unaware that their parents had arranged for the cheating." No students have been charged with any crimes — but according to ABC 7, prosecutors didn't rule out the possibility.