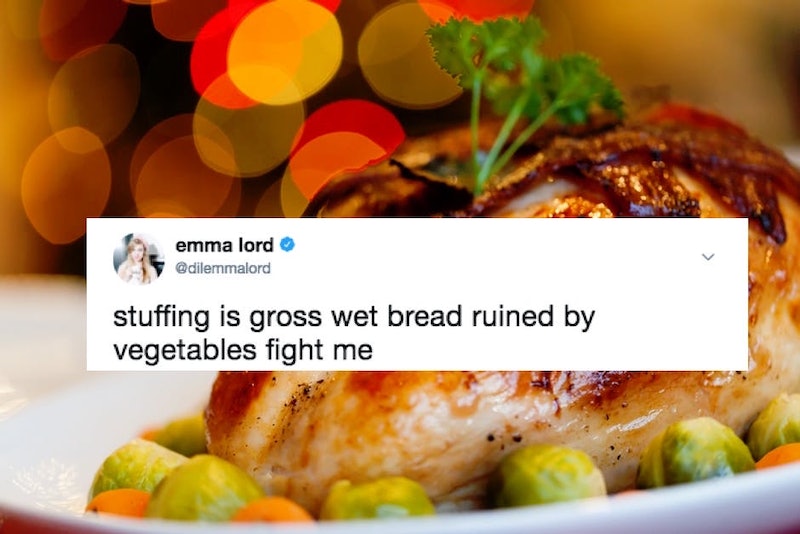 Hello friends, neighbors, coworkers, and fellow Oscar Isaac enthusiasts. We people of the internet are gathered here today so that I can pull the wool off the eyes of the collective American consciousness: stuffing is the worst Thanksgiving side dish, and this is an indisputable fact.

Listen — I am a simple woman. I have simple needs. Those needs, to be specific, are carbohydrates, butter, cheese, and to be kept at least thirty feet away from fresh vegetables at all times. As such, I struggle to understand the point in American history where someone said, “Hey, you know what would improve the perfection of that butter and bread we've been doing just fine surviving on? Putting a bunch of green nonsense in it.”

For some perspective, consider putting vegetables in any other beloved American dish. Carrots in your hot dogs. Spinach in your French fries. Broccoli in your cherry pie. Have I given you heart palpitations yet? Because my bread and butter-loving ancestors are rolling in their graves. They did not brave the perilous boat trip from Sweden so that we could come here and be subjected to this pro-vegetable malarkey. (Side note: if there is a Swedish version of stuffing, please do not tell me; I am not strong enough, nor well I ever be, to cope.)

Anyway, today I (BRAVELY! HEROICALLY!!) shared my opinion on Twitter, and, well, that ended about as well as you can expect. Read: I immediately lost five followers, and will probably stand to lose quite a bit more.

“But Emma,” several well-meaning people have tweeted at me and/or approached me at my work desk to say in human form, “you clearly just haven’t tried the right kind of stuffing yet.” Oh, really? The same way I don't enjoy dating because I haven’t met the right kind of man yet, Aunt Midge? (To be clear, my actual aunts are lovely and respectful of my choices, both dating- and stuffing-related, unlike some of the people in my Twitter mentions today.)

Listen, guys, I'm open-minded. I used to work in a bread shop, for carb's sake. I've had every fruit and nut combo and sourdough crust and focaccia remix under the sun.

And you can bet your bottom dollar I have tried stuffing, too. Crispy stuffing. Mushy stuffing. Stuffing with onions it (onions!). Stuffing with celery in it. Even one well-intentioned stuffing just a few hours ago that I mistook for a cornbread mash until I bit into a surprise vegetable that I would be able to identify if I weren't so woefully unhealthy that all vegetables kind of just look the same to me (help?).

My opinion may not be a popular one, but at least I am not alone; together, my stuffing dissenters of Twitter will not rest until the American people stop putting vegetables where they do not belong.

The rogue stuffing haters of the internet have spoken — but that has not stopped my peers from attempting to save me from myself, as evidenced by the few but decidedly passionate replies I have gotten on Twitter.

In conclusion, this Thanksgiving, my fellow humans, respect god(s), country, and Oprah Winfrey by doing with bread what the universe intended: toasting it, buttering it profusely, and then LEAVING. IT. ALONE.

I'd drop the mic, but I'm pretty sure I just got disinvited to every Friendsgiving gathering between now and the year 2100. It's been real, friends. Remember me fondly when I die of scurvy from not eating vegetables, because this is the hill upon which I die.