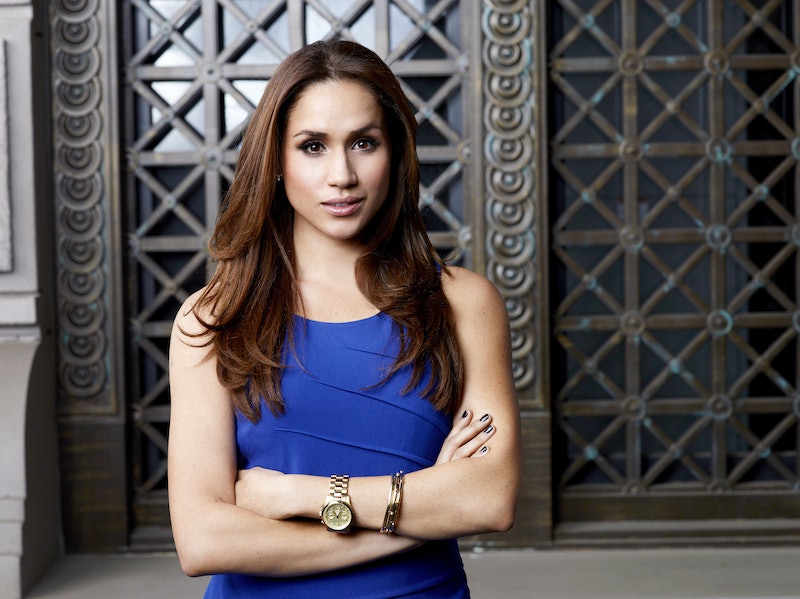 Given her royal status, it's hard to believe that Megan Markle was only recently a TV star. However, the Duchess of Sussex was exactly that, and before tying the knot with Prince Harry back in 2018, she played the character of Rachel Zane in the U.S. legal drama, Suits. Unsurprisingly, the former-actor departed the series upon her entry into the British royal family, and I wouldn't hold your breath for a future cameo appearance from the Duchess. However, viewers were recently treated to a subtle Meghan Markle joke in an episode of Suits, and it didn't go unnoticed by fans of the show.

As reported by the Daily Mail, the U.S. drama is currently airing its ninth and final series, and in a recent episode, the character of Mike Ross made his return. In the show, Ross was previously known as Markle's on-screen husband, and when asked about how his wife is getting on, the character replied, "If I told you how good, you probably wouldn’t believe me."

In case you missed the reference, the line was of course referring to Meghan's new off-screen life as a fully-fledged member of the British royal family, and following the episode, the official Suits Twitter account shared a post of the scene. Along with a wink face emoji, the social media post included a caption that read, "Turns out Rachel is doing REALLY well."

The Duchess of Sussex had previously appeared in the first seven seasons of Suits, and portrayed the character of Rachel Zane. After her decision to leave the show in order to focus on her new royal duties, writers of the hit U.S. legal drama were forced to write-out Markle's character. At the end of season seven, it was revealed that Rachel had moved to Seattle with husband Mike Ross (Patrick J. Adams) to set up their very own law firm.

During an interview with Entertainment Tonight, Adams, who plays Meghan's on-screen hubby, discussed how the show manages to keep Markle's character in the loop. He said, "For Mike this is just a trip to New York. There’s phone calls with Rachel saying goodbye and I love you, and y’know I think there’s some obvious acknowledgement that she’s still there and a part of the show. This is just a way for him to come see his friends one last time."

Although no longer part of the show, it seems Meghan is still on good terms with her former-cast mates, because as the The Sun reports, the cast of Suits were invited to the Duchess' royal nuptials at Windsor Castle in 2018 — as well as her baby shower which took place in New York earlier this year. Very Nice.

Viewers in the UK can watch the final series of Suits on Netflix. New episodes of the hit drama are uploaded to the streaming platform on a weekly-basis, and if you're still catching up, the first eight seasons of Suits are also available in their glorious entirety. Enjoy.