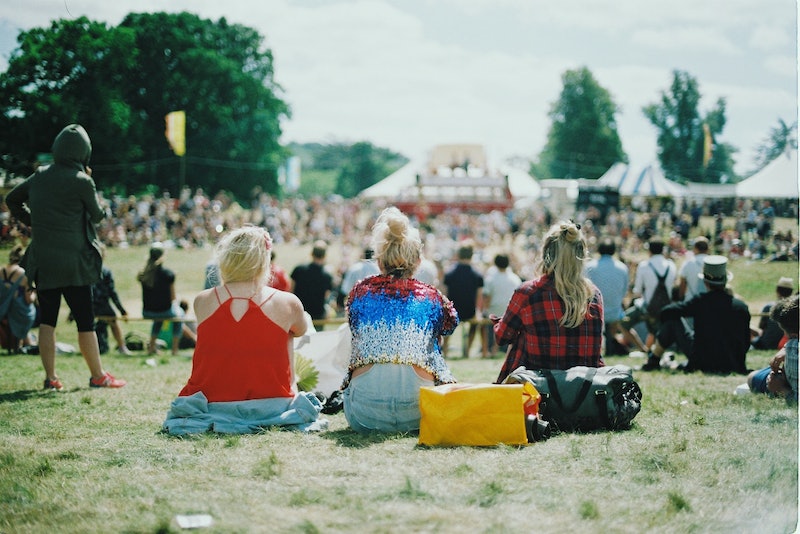 Brace yourselves: there’s life beyond the desert valley parties that are Coachella and Burning Man. Yes, unique music festivals do take place post-chella and Burning Man… all summer long, in fact, from this upcoming Memorial Day weekend with BottleRock in Napa, CA, and Bayou Country Fest in New Orleans, LA, into June and July with Bonnaroo in Tennessee and Summerfest in Milwaukee, Wisconsin, all the way through September, with Electric Zoo in NYC. The best part is, some are even spread out over different states with multiple touring options, like the Warped Tour. That means you have plenty of awesome opportunities to grab some friends and rock out on a lawn somewhere.

So scroll through this list to consider your options and get ready to book your tickets and plan your boho best outfit. Then all you need are feathers, glitter, glow sticks, and temporary tattoo accessories to actually get in the sprit.

Arguably the best music fest of the summer, BottleRock takes place in Napa, CA right before Memorial Day, and features headliners like Maroon 5, Tom Petty, Macklemore, The Foo Fighters, and about 80+ other acts. It’s also different from most single days concerts in the fact that there are celeb chefs like Martha Stewart, José Andrés, the Voltaggio bros, and others serving up some serious cuisine over a three-day span. Plus, if you upgrade to VIP, you can hang in the Alaska Airlines deck for wine tastings with master sommeliers. Did I mention there’s a spa? Yep. I told you it was the best.

If you’re down with country, love yourself some Abita, and happen to be in (or near) NOLA, then head on over to Bayou Country Superfest. Blake Shelton will be there (so there’s a chance you’ll get a glimpse of Gwen Stefani!), along with Rascal Flatts, Hank Williams Jr., Brooks & Dunn, and Miranda Lambert.

Chance the Rapper, Lorde, Flume, Tool, Banks, Wu-Tang Clan, Air, Cage the Elephant, Childish Gambino, Wiz Khalifa, and a bunch of other artists will be rocking out at Gov Ball if you’re going for the music. I'll be there for the mini golf, braid bar, lawn games, and Sour Patch candy bar too.

With more than 55 bands over two days, FPSF is a music-lover’s dream. Since its inception in 2009, FPSF has featured a diverse lineup ranging from world-renowned acts to up-and-coming artists — and for 2017, they've booked Lorde, Flume, G-Eazy, Solange, and Cage the Elephant. They’ll also be serving brisket sliders, queso, and something referred to as a “pizza cone.” I’ll take four, thanks.

If you’re willing to embrace your inner camper at the famous four-day camping fest that’s held on a farm in Tennessee, then you can listen to U2, The Weeknd, Major Lazer, The XX, Travis Scott, and a bajillion more bands at Bonnaroo. You can also shower for $7, MacGyver your own campsite, and probably launch your own candle company.

“Four days, nine stages, 140 bands, and thousands of new friends” is how Firefly Music Festival advertises itself so please excuse me while I go book my tickets. They also share that they’re “a premier music experience set among lush wooded landscapes, featuring renowned headliners and emerging artists.” You had me at lush wooded landscapes. Oh, and Bob Dylan and Kesha are performing on the same day, so there’s that.

Electric Daisy Carnival, commonly known as EDC, is a festival for expert-level festival-goers. With that said, if you, A, happen to love electronic dance music and, B, don’t mind Vegas, then you’re going to have a blast.

June 16-August 6 In Various Cities Across The U.S.

The Warped Tour is a traveling rock fest that’s been going strong since 1995. Not only is it the longest-running touring music festival in North America, but it’s also one of the biggest. 2017's featured acts include: Attila, Bowling for Soup, CKY, Futuristic, Hawthorne Heights, I Prevail, Goldfinger, American Authors, Sammy Adams, and tons more. Insider tip: Music Saves Lives offers a backstage wristband for the first 100 fans that donate blood or have someone donate blood on their behalf each day, which might just be the best thing that’s ever been offered at a festival.

Let’s put it this way: Summerfest is so huge (there are 11 stages and over 800 acts throughout 11 days) that you can take ski lifts back and forth across the 75-acre Henry Maier park to get around faster. It’s also pretty epic because everyone (and I mean everyone) performs there: The Red Hot Chili Peppers are a given, but 2017 also brings Luke Bryan, Paul Simon, Zac Brown Band, Pink, The Chainsmokers, Big Sean, Future, Willie Nelson, Sheryl Crow, and The Shins to the lineup. And there’s countless “on a stick” food options if you’re into that — I obviously am because I'm not allergic to fun.

The Essence Festival, known as "the party with a purpose,” was started in 1994 by Essence Magazine, and regularly draws big names like Diana Ross, Mary J. Blige, John Legend, Jill Scott, Chaka Khan, India.Arie, and many more. They also host motivational seminars, beauty and style demonstrations, and stargazing during their fest, plus give out fun freebies and offer sizzling Southern cuisine options like shrimp & grits, crawfish etoufeé, and gumbo. Yum.

LCD Soundsystem, A Tribe Called Quest, Solange, PJ Harvey, and Dirty Projectors will all be at Pitchfork Music Festival in July, along with a bunch of other artists who are all sure to be great considering Pitchfork is putting the lineup together. They’re also doing a special collab with Saint Heron, the label and arts platform founded by Solange: a curated event series that features an onsite art installation, film screening, artist talks, late night jazz jam sessions and more, taking place at various locations throughout Chi-town.

The Capitol Hill Block Party has proven its reputation for bringing some of the greatest northwest and national performers to Seattle true, and has played host to legendary artists in the past. In 2017, the party is showcasing hip-hop super group Run The Jewels, electronic DJ Diplo, and indie-folk band Lord Huron. Also, don’t you want to attend something that’s called Capitol Hill Block Party? Because I do.

With a little something for everyone, prepare to hear alternative rock, heavy metal, punk rock, hip-hop, EDM bands and artists, dance, and comedy performances at Lollapalooza. Also, there are craft booths, you guys. Just sayin’.

One of New York’s largest music festivals, Electronic Zoo celebrates Labor Day weekend with the top names in electronic music. 2017 will be no exception, with an all-star lineup including DJ Snake, Above & Beyond, deadmau5 and Eric Prydz. Get your neon ready.