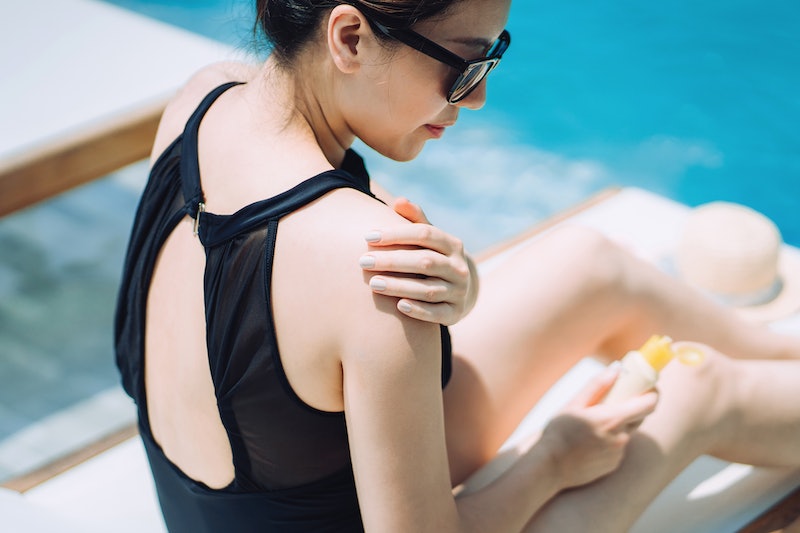 Summer means picnics, trips to the beach, and desperately trying not to scratch those pesky bug bites. But it also means using sunscreen to protect your skin from harmful UV rays, which can increase wrinkles or cause painful sunburns and skin cancer. Recent reports, however, suggest that some sunscreen chemicals might actually be unsafe, and now, the Food and Drug Administration (FDA) says that these sunscreen chemicals may in fact be absorbed into your bloodstream. This news "[confirms] the need for more testing on whether these products are safe," Reuters reported.

Guidance from the FDA states that if a sunscreen’s active ingredients absorbed into the circulatory system at levels greater than 0.5 nanograms per milliliter, then the sunscreens should be studied further to determine potential risks. A study published in The Journal of the American Medical Association (JAMA) back in May 2019 tried to find out how much of the active ingredients (avobenzone, oxybenzone, octocrylene, and ecamsule) of different sunscreens were absorbed into the blood of participants. Testing two sprays, a lotion, and a cream, the scientists found every product except the cream had absorption levels that exceeded the FDA’s limit. The FDA's new report, also published in JAMA, replicated these findings, Reuters reported.

"It’s entirely possible that the amounts absorbed are completely safe," Aaron E. Carroll wrote for The New York Times at the time. "In fact, given the widespread use of sunscreen, and the lack of any data showing increases in problems related to them, it probably is safe. Sunscreens are a key component of preventing skin damage that can lead to skin cancer." Sunscreen remains one of the most effective ways to prevent skin cancer, which affects 3.3 million people each year, according to Cancer.org.

Not using sunscreen can increase your risk for sunburn or skin cancer, according to the Center for Disease Control (CDC). Having more than five sunburns in their lifetime doubles a person’s risk for developing melanoma, a particularly dangerous form of skin cancer, according to the Skin Cancer Foundation. And despite misconceptions, people with darker-toned skin can still develop skin cancer. Only 69% of Black people survive after a skin cancer diagnosis, compared with 93% percent of white people, according to Cancer.org. People of color are also more vulnerable to a specific, deadly form of skin cancer called acral lentiginous melanoma (ALM), which if advanced, can lead to amputation or death. Popular reggae singer Bob Marley died of this illness at age 36, the Skin Cancer Foundation says, after dismissing his symptoms — a dark spot underneath his toenail — as a mere soccer injury. It's clear that no matter who we are, UV exposure pose serious risks to our health. Using sunscreen helps us reduce those risks.

But even though the risks of chemical absorption are minimal, if you're concerned about the possible implications of this study, then it’s best to buy sunscreens without certain ingredients. Although it’s not an official rule, the FDA has proposed that sunscreens with aminobenzoic acid and trolamine salicylate should not be labeled “generally regarded as safe and effective.” According to Chemical Watch, aminobenzoic acid can cause allergic reactions, while trolamine salicylate can cause bleeding. Instead, the FDA says to choose sunscreens that contain zinc oxcide or titanium dioxide, which are gentler on the skin and last longer in UV light, according to Color Science.

But because they’re not as easily absorbed, these sunscreens can leave a noticeable layer on the surface of the skin. It may not be the cutest look to have a sticky white sheen on your skin, but right now, they're considered the safest option. There are many zinc oxide or titanium dioxide sunscreens available, with ingredients listed on the bottle.

It’s also important for sunscreen users to be aware of the risk that sunscreen poses to the environment, not just human health. A 2015 study published in The Archives of Environmental Contamination and Toxicology found over 14,000 tons of sunscreen in the world's coral reefs, which leads to bleaching, or the release of algae from the coral. This kind of pollution, along with litter and ocean warming, has led to the destruction of many coral reefs. Coral reefs are a life source; they absorb carbon, provide a habitat for many marine organisms, and protect coastlines from tropical storm damage. It’s crucial to protect these reefs by using reef-safe sunscreens.

No matter the season, you need to make sure you're protecting your skin from damage and cancer. When buying sunscreen, don’t be afraid to ask questions at the store or do your research beforehand. Sunscreen saves lives, but it also might pose some risks — and knowing what to look for in advance can help you feel good about what you're putting on your body.

This article was originally published on June 10, 2019