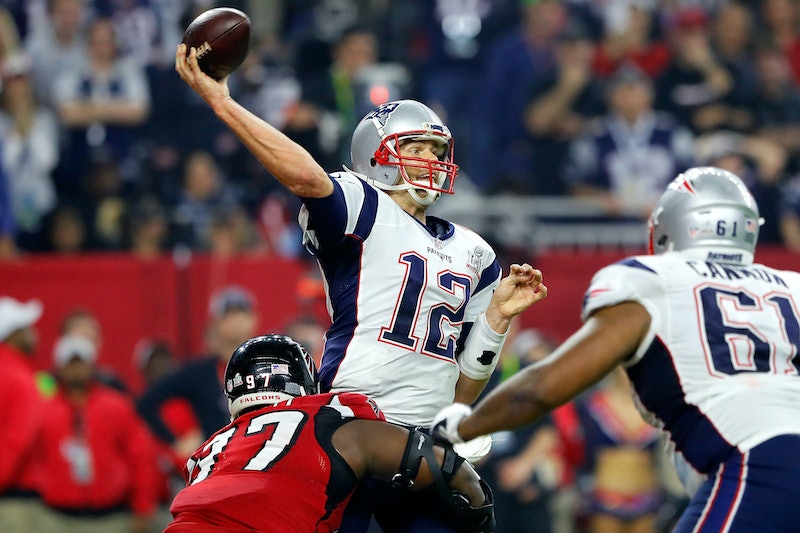 As the New England Patriots came back to tie the Atlanta Falcons in the final minutes of Super Bowl 51 regulation play, it felt, for some viewers, a whole lot like another historically American event that turned out counter to everyone's expectations — the 2016 election.

The Falcons captured most of the good will both in the leadup to the game and during the actual event. Patriots quarterback Tom Brady was suspended for the first four games of this season following #deflategate allegations, and after Donald Trump made clear that he was rooting for the New Englanders to win the big game (and that he is friends with Brady, how could you Gisele?), Twitter erupted with people pledging to support the Falcons just to spite The Donald. So when the Falcons emerged with an early and decisive lead — 28 to 3 at one point — it seemed like the good guys were going to emerge victorious. And when the Patriots tied it 28 to 28 in the final minutes and won in overtime, lots of viewers got flashbacks to November 8, 2016, when the seemingly rightful heir to a big victory was shockingly defeated.

People equated The Patriots misdeeds with Trump's, though I hope we can agree one has behaved far more egregiously than the other.

Though thankfully people were more measured in their assertions that Bernie Sanders could have taken the whole thing.

We know who the winner is in our hearts.

And other Trump supporters seemed to accept the Patriot's victory as their own.

Even Donald Trump Jr. took a moment to gloat over the familiar turn of fortunes.

And his dad did, too

But before Trump supporters claim the Patriots victory as their own, let's not forget that only 32 percent of Massachusetts voters went for Trump, and that it remains one of the most liberal states in the nation. In Boston proper, 216,754 people voted for Hillary Clinton while only 37,756 voted for Trump — that's a paltry 15 percent.

So as much as people like Tomi Lahren and Donald Jr. are gloating following this victory, let's remember that the people of Boston, and of New England as a whole, are decisively not on their side when it comes to politics. Patriots fans and Trump fans may have a sliver of overlap in the Venn diagram but they are unequivocally not the same squad, and there were probably lots of Patriots fans tonight who could have done without the president's support tonight. Donald, the Patriots are not your team.

Further, while these comments are certainly made mostly in jest, let's not pretend that the results of the 51st Super Bowl are close to comparable to the 2016 election in terms of their detrimental impact. The Patriots came away tonight with a trophy, which is surely disappointing to those rooting for their opponent, but Trump came away with the White House, and all the dangerous power that comes with it.

More like this
Naomi Osaka's Boyfriend Cordae Is A Grammy-Nominated Rapper
By Jordyn Tilchen
Rihanna Tells Us To Shush About New Music In Super Bowl Halftime Show Trailer
By Jake Viswanath
'Breaking Bad' Duo Walt & Jesse Are Back — In This Super Bowl Commercial
By Jake Viswanath
Twitter Has *A Lot* To Say About The "Single Penalty”
By Sam Ramsden
Get Even More From Bustle — Sign Up For The Newsletter
From hair trends to relationship advice, our daily newsletter has everything you need to sound like a person who’s on TikTok, even if you aren’t.