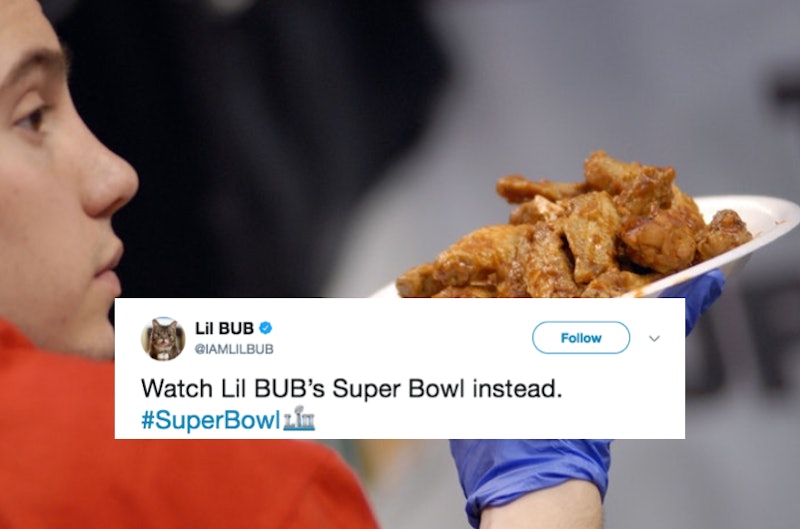 From touchdowns to bone-crushing tackles, and maybe even a Hail Mary pass or two, there's sure to be a ton of action on the field when the Philadelphia Eagles face the New England Patriots in Super Bowl LII at U.S. Bank Stadium in Minneapolis. But the action isn't just happening on the field. These #SuperBowlSunday tweets prove the Internet is serving up plenty of game day entertainment.

Like Christmas, Super Bowl Sunday comes only once a year. And sure, football is what brings us together on this epic day, but let's be real. It's not the only thing to love about Super Bowl Sunday. Between the commercials, the snacks, the unbelievable plays, and, of course, the halftime show, there's also the chance to gobble up some genius football-related jokes on Twitter.

Whether it's to place a bet, root for their preferred team, complain about the refs, react to a did-you-see-that pass, or just question the uniform choices, you can be sure the Internet will have something to say about almost every aspect of the Super Bowl. And really, what would Super Bowl Sunday be if we didn't have social media to help bring us all together?

Here's how Twitter is reacting to Super Bowl Sunday:

The excitement on Super Bowl Sunday is absolutely contagious, even if football is not your thing.

One of the most important aspects of a Super Bowl watch party is surrounding yourself with friends.

I think it's safe to say Diddy scored a great seat at Super Bowl LII. Nothing beats the view from the sidelines.

Who To Root For When Your Team Didn't Make The Cut

The fact that they didn't make it to the Super Bowl didn't stop the Dallas Cowboys from having a little fun on the day of the big game.

A Different Take On "Super Bowl"

Apparently not everyone hears the phrase "Super Bowl" and thinks football.

What's a Super Bowl Sunday without a little friendly ribbing?

Did You Say Super Bowl Or Superb Owl?

You say "Super Bowl Sunday," I say "Superb Owl Sunday." Either way, the day should be a national holiday.

Get On The Bandwagon

Everyone has their own special way of participating in Super Bowl Sunday.

A Love Of The Game

You do not have to love and understand football to enjoy Super Bowl Sunday. There are snacks. There's a free concert somewhere in the middle. Did I mention the snacks?

Remember The Real Heroes Of The Super Bowl

This year's Super Bowl is officially the coldest in history.

About The NFL's New Concussion Protocol

There was little doubt Rob Gronkowski, the tight end for the New England Patriots, would be listed as "active" for Super Bowl LII.

Super Bowl Sunday isn't for everybody.

This is also my Super Bowl tradition.

Just Get To The Commercials

For some, Super Bowl Sunday is a series of commercial debuts with a bit of football in between.

Everyone watched Pink drop her gum just before singing the National Anthem.

What Are The Odds?

That's not quite how football works, but I guess never say never.

Though the Super Bowl itself is plenty entertaining, you can't deny how satisfying these tweets are. So, watch the game and scroll through social media at your heart's content.