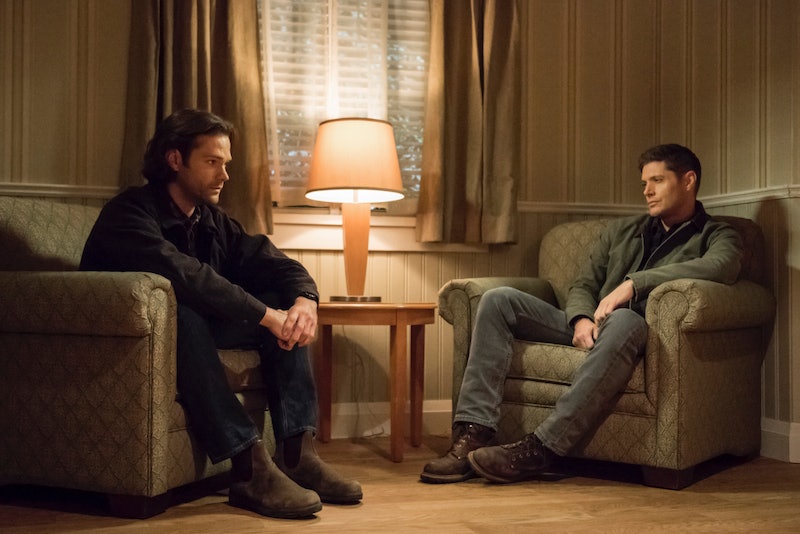 It's hard to make a TV show that ends up with the longevity and passionate fanbase of Supernatural. That's why the show reaching its milestone 300th episode on Thursday is such a big deal. But what's perhaps more impressive than Supernatural hitting 300 episodes is the fact that in 14 seasons and almost a decade and half of filming, co-stars and real-life BFFs Jensen Ackles and Jared Padalecki have only had one fight.

Standing on the red carpet outside the Supernatural 300th episode party celebration in Vancouver, Ackles laughs when he thinks back to that game-changing moment in the first season that almost threatened their friendship and potentially the show's future. "The first season, there's a few stories," he tells Bustle of his first and last fight with Padalecki. While he didn't spill the exact details of what led the long-running co-stars to go head-to-head, he did reveal that it was messy. "We got into a really heated argument and we stomped away from each other," he adds. "We blew up at each other."

But that one fight ended up being exactly what Ackles and Padalecki — and the show itself — needed to succeed for the next 14 years. "Shortly after we came back together and sat down and said, 'Well, if this is going to work, that can't ever happen again,'" Ackles says. "We built on that and we formulated a new trust and realized that we're better as a unit than as enemies. We've made it 14 years and counting like that. Three hundred episodes, there you go."

14 years is a long time to work the same job, let alone spend all those hours with the same people day in and day out. That's why both Ackles and Padalecki credit the long-running series with helping them grow into the adults they are today.

"I've been an adult for 18 years and on Supernatural for 14, so it's difficult to even comprehend," Padalecki tells Bustle of how much the show has changed him. "I've learned to take the long view of things and not focus so much on winning the battle as winning the war, or just surviving. I don't want to say winning the war because it's not a win/lose game. But I've learned to appreciate the long term and play the slow game; play chess as opposed to checkers."

Supernatural wasn't the first iconic role that Padalecki played; he started his career playing Dean on Gilmore Girls when he was 18. But it's his time playing Sam Winchester that Padalecki says greatly enriched his life.

"I am 100 percent certain I am the most blessed man on the planet," he adds. "I've been humbled along the way and luckily I've had friends I trust and respect enough to tell me, 'Hey, be humble.' I've been a very lucky guy."

As Ackles looks back on the past 14 years playing Sam's older brother Dean Winchester, he starts to laugh and shake his head. "My whole life is different other than being in Vancouver and shooting the same show," he says. "I was a twenty-something bachelor living in California, now I'm married with three kids living in Austin, Texas. My life has changed quite dramatically, but this show has been the constant in my life and it continues to be. It's pretty cool."

When Padalecki and Ackles put on their Winchester flannels for the first time 14 seasons ago, they had no idea that they would become the uniform of their adult life. But now Supernatural is the longest-running hour-long sci-fi drama in the history of television, and they can't imagine what life would look like without having to wear flannel every day riding around in a black 1967 Chevrolet Impala. So with the wisdom he has now, Padalecki has some advice for his 18-year-old self who hasn't yet filmed the very first episode of Supernatural: "Beware of Ruby," he says with a laugh, referencing the character his now-wife Genevieve Padalecki played on the series.

He pauses, then continues, "Life is short is great and as a mantra when you're a teenager or a twenty-something but when you get to the later parts in life and you have a wife and three kids and some friends you've had for 20 years, you're like, 'You know what? I don't need to blow it out every night. I don't need to treat every day or every opportunity like whoa, this is the coolest opportunity on the planet.' Learn something new every day, learn something from someone every time you meet them, and play the long game."

And while Ackles jokes that he would tell his younger self to "buy more real estate," he wouldn't change much about his entire professional career and personal life while working on Supernatural.

"If anything, I'd say to enjoy the ride. But I enjoyed it pretty well," Ackles says. "I had some pretty great people giving me really great advice early on." Three hundred episodes with only one fight and no regrets? Now that's something to celebrate.

More like this
A New 'And Just Like That' Table Read Pic Confirms A Key Character's Return
By Jack Irvin and Grace Wehniainen
'The Crown' Season 6 Has Suspended Filming "Out Of Respect" For The Queen's Death
By Bustle Staff
Ozzie’s Coming Out Scene With Kitty On 'That ’90s Show' Has Twitter Sobbing
By Brad Witter
Everything To Know About The 'Daisy Jones & The Six' TV Series
By Maxine Harrison and Brad Witter
Get Even More From Bustle — Sign Up For The Newsletter
From hair trends to relationship advice, our daily newsletter has everything you need to sound like a person who’s on TikTok, even if you aren’t.